Tom Coronel was driving during FP1 for the FIA World Touring Car Championship round at Vila Real when his car suffered a left-front wheel failure.

It happened at a particularly bad corner, with a fast section of track being followed by a slow left-hander.

With no way of stopping, his car went straight on and down the poorly-located escape road, bouncing over the grass and straight into a fire van.

Amazingly, for a track that’s raced on by the FIA, there was no tyre barrier or wall between the escape road, the grass verge and the recovery vehicles.

Plus, there were spectators and people close to the fire van that was hit. Pretty worrying, really. Coronel later revealed five bolts snapped into the braking zone.

He added that the force of the crash was a crazy 25G, which is absolutely mad – especially as, from the TV footage, it didn’t look all that big.

However, it’s when you see the onboard view (in the video above) that you really see how large a hit it was.

Coronel is quoted by Autosport saying:

“I didn’t have any brakes and couldn’t do anything because of it. In hindsight, I’m happy the ambulance was parked there rather than blocks of concrete with the impact that would have caused.

“All the safety measures worked well and an investigation by the FIA revealed that the force of the impact was around 25G.

“The safety belts of the car were cut in two [after the incident, to prevent re-use], just like the ties of the HANS system. The serial number of my helmet was noted. That can never be used again.”

That really is a bonkers figure. Thankfully Coronel was OK. 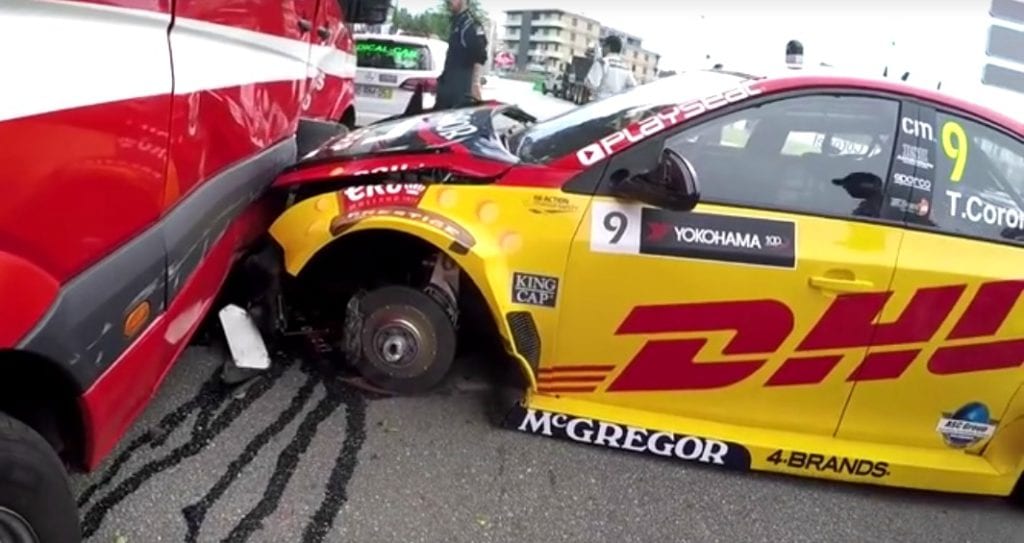