Both Ferraris Were Eliminated After A Chaotic Start In Singapore – WTF1
Skip to content
×
Crash , Formula 1

Both Ferraris Were Eliminated After A Chaotic Start In Singapore

Rain shortly before the start of the Singapore Grand Prix got everyone excited and increased the chances of something unusual happening into the first corner.

Unfortunately for Sebastian Vettel, he was the focal point of what happened. He made and OK start and went to cover off Max Verstappen, who’d made a similar getaway. Unknown to Vettel however, Kimi Raikkonen had hooked up his start and was on the inside trying to pass both of them.

Vettel forced Verstappen into Raikkonen, who spun around and hit his teammate as a result.

Kimi and Verstappen were instantly out of the race. Vettel kept going, but spun coming out of turn three on the fluid pouring from his Ferrari’s sidepod as a result of the contact, which eventually led to him retiring as well.

This was great news for Lewis Hamilton, who found himself in the lead after also making a terrific start and well poised to make huge gains on Vettel in the championship. Fernando Alonso also made a great start but he wasn’t so lucky – he got caught up in the chaos and later retired as a result. 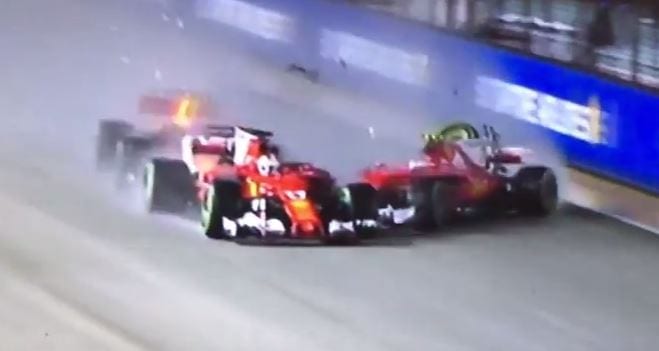