Bottas Beats Hamilton In A Straight Fight To Win The Last Race of 2017 – WTF1
Skip to content
×
Formula 1 , News

In something of a throwback to the past few years, both Mercs were well ahead of everyone in a race that won’t exactly go down as a classic… in fact, quite the opposite – it was probably the most boring race of the year.

Despite a couple of moments where Lewis got to with a second of his teammate, Bottas generally had enough to hand to keep ahead, and in the closing laps increased his pace to show he had it under control all along.

Vettel and Raikkonen were a distant third and fourth, with Daniel Ricciardo’s chances of mixing it up a bit disappearing early on when he retired with a car problem shortly after his pitstop. Max Verstappen finished fifth – not far behind Kimi, but he couldn’t quite muster up the pace to really challenge him.

Hulkenberg was a strong sixth – not only Renault’s best race for quite a while, but also enough for the team to pinch sixth in the constructors’ championship from Toro Rosso. A good thing, really, considering the embarrassment of Carlos Sainz’s retirement – the team didn’t put one of his wheels on properly during a pit stop and he had to retire, only just avoiding crashing out in the pit tunnel in the process.

The two Force Indias were next up, followed by Fernando Alonso, with Felipe Massa bringing his Williams home in 10th to score a point in his final race. We’ll miss you, Felipe!

Although nothing interesting happened among the top 10, there was some reasonable action going on in the lower midfield. Of all people, Romain Grosjean and Lance Stroll had a great scrap in the early stages, and Pascal Wehrlein put a lovely move on Kevin Magnussen later on, only to be DRS’d on the following straight.

So, that’s the 2017 season over. A pity it wasn’t a more exciting race to end on, but at least the donuts on the cool down lap were pretty cool, right?

#F1 – Find out the full results of the #AbuDhabiGP 🇦🇪 pic.twitter.com/nSUFtEZjd6 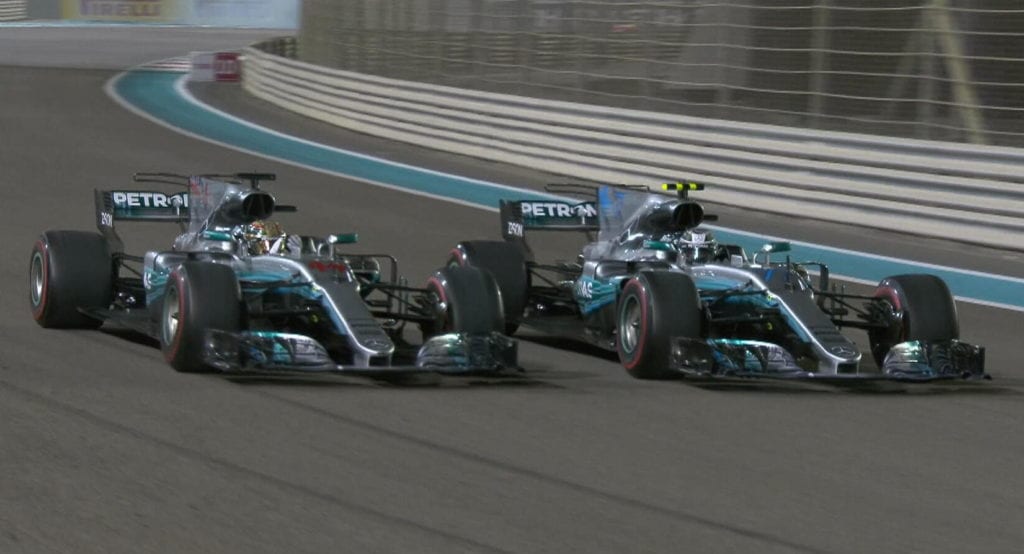