Not only content with living with the wolves in a reflective rallying and facial hair-filled off-season, apparently the Finn enjoys having to really work for his Mercedes contract. The Red Bull Ring is a tricky circuit, one with gravel traps waiting to swallow those who dare transgress past the white line. However, it couldn’t save Bottas from wrecking the front of his Mercedes in a challenging second practice on the exit of Turn 6 after some on-throttle oversteer.

He was one of several drivers to make high-profile errors, something Bottas said he enjoyed about the circuit, saying after his 23G-impact:

“Even though I crashed, I do prefer to be penalised for the mistakes. It makes it more exciting. I think that is how it should be and definitely mistakes here cost a lot with aggressive kerbs and minimal runs-off and everything.”

Will be a busy night for the boys in the garage and we’ll come back stronger tomorrow 💪#AustrianGP pic.twitter.com/cHfiF9vlT8

It capped a difficult day for the second-placed man in championship, although he ended his truncated FP2 in second behind Ferrari’s Charles Leclerc. In the morning, Mercedes had to change his power unit due to an oil leak – again cutting into his running time.

But, Bottas remains confident. And why wouldn’t he – he drives a Mercedes. The only race the team hasn’t won in the Styrian mountains since the track’s 2014 return was last year, due to a very rare double technical retirement – it’s first for over 60 years…

“This morning we had a bit of an issue with the engine, so we had to swap back to the old one for first practice, so that compromised first practice a little bit. But we still found a clear direction on the car set up and where to go, and made pretty big changes for FP2 and felt a lot better until I had the shunt. But before that it was feeling quite nice.”

The question is, can Bottas and teammate Lewis Hamilton keep it out of the wall and dip into the 1:02 bracket – or maybe even lower – in qualifying after coming so close last year? 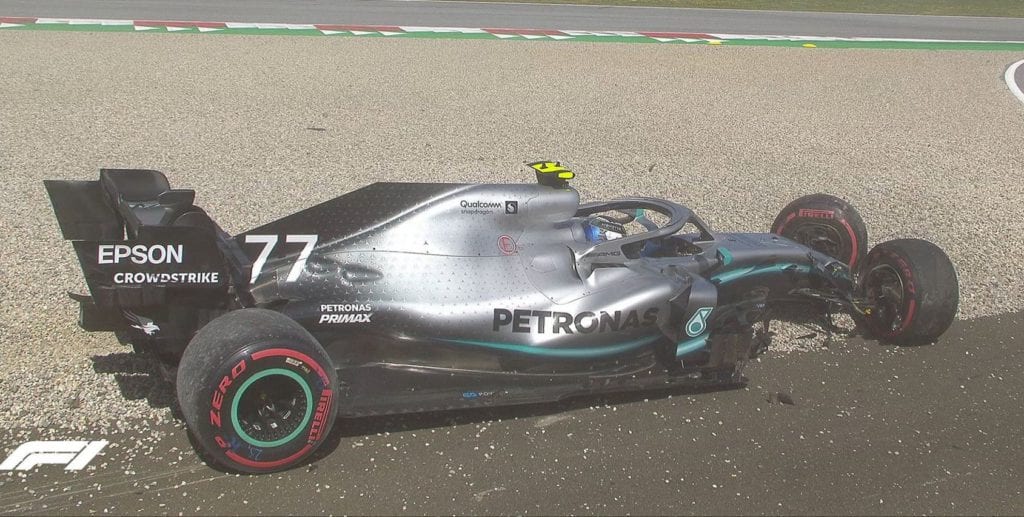