It was a slightly odd qualifying session brought about by the fact that Pirelli has brought tyre compounds that are step softer than they were for last week’s race at Silverstone. This week, the soft tyre simply seems to be too soft, with nobody wanting to use it for the race, with many teams using them up in Q1 and then trying to use the mediums (or in Red Bull’s case, the hards) to make it into Q3. Some even felt the medium was quicker over a lap – both Mercedes drivers opted for the yellow-walled tyre and it was Bottas who made the most of it, edging Lewis Hamilton by just a few hundredths of a second in the closing stages.

The battle for third was rather closer. Red Bull tried using the mediums for their first Q3 runs before switching to the softs. This was enough for Max Verstappen to leap up to fourth, but he was pipped by super-sub Nico Hulkenberg, who’s looked a lot more comfortable in the car this weekend now that he’s had a bit more preparation and experience. His best lap puts him third, and was three-tenths faster than Lance Stroll (who qualified sixth) in the process.

Daniel Ricciardo was another one with a strong session to end up fifth, with Pierre Gasly also doing a fine job to put his Alpha Tauri seventh. Ferrari’s struggles continued – Charles Leclerc could only make it up to eighth, but at least he made Q2: Sebastian Vettel threw everything at qualifying but could only wind up 12th.

One person who did a quietly excellent job was Romain Grosjean. Haas hasn’t looked quick on Saturday’s at all this year, but he was able to make it into Q2 with a lap seven-tenths faster than his teammate. He found some more lap time in Q2 and although he only ended up 14th, he was just a couple of tenths away from making Q3.

Daniil Kvyat was the surprise exit from Q1 after he ran wide at Chapel and seemingly damaged his floor on the kerbs, and then had his best lap time deleted after exceeding track limits. Still, it could be worse – Alfa Romeo continues to prop up the back of the grid, with both Antonio Giovinazzi and Kimi Raikkonen outqualified by Nicholas Latifi’s Williams.

All-in-all, the grid makes for a pretty promising prospect for the race as unless he can get him off the start, chances seem quite high that Hamilton could end up fighting with his teammate on track. Hulkenberg surely has a superb chance of finally scoring that elusive podium, and Red Bull’s gamble of qualifying on the hard tyres could make for an interesting strategy twist.

Speaking of which, the softer tyres should mean the majority of the field end up two-stopping, which is often effective in terms of spicing up a race. Well, unless anyone fancies playing puncture roulette, anyway… 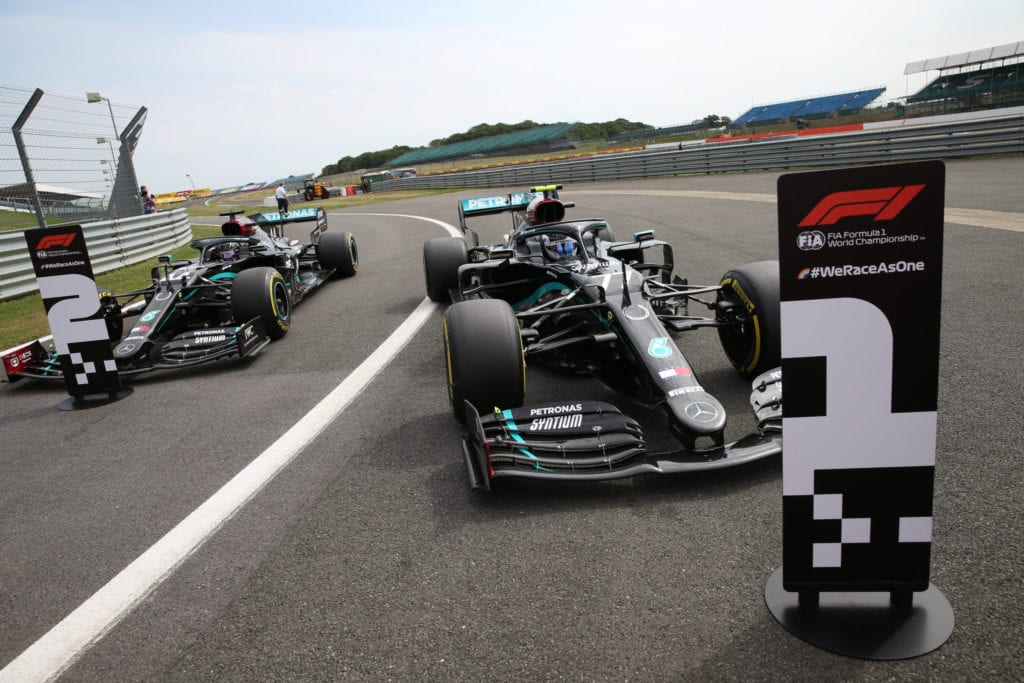