Bottas Says He Didn’t Let Hamilton Past Earlier As He Was Doing ‘His Own Race’ – WTF1
Skip to content
×
Formula 1 , News
4 comments

Valtteri Bottas was out of contention for the win from Lap 1 of the Spanish GP after Charles Leclerc blasted around his outside at Turn 3, but that didn’t mean he was keen to let his teammate Lewis Hamilton past when he was in a late fight for the win.

In the later stages of the race, Bottas was faster than the leader Max Verstappen, but not as quick as Lewis behind him. Hamilton had pitted for fresh tyres and was on the charge for victory.

“No, I definitely could have let him by earlier, but I was doing my own race,” Bottas told SkySports after the race. “It’s always calculating things, and I was trying to get Charles out of my pit window so I could stop again and try and go for an extra point. The main thing in my mind was my own race.

Bottas lets Hamilton past but it wasn't the smoothest switching of places#SpanishGP 🇪🇸 #F1 pic.twitter.com/M7yZYGnPL5

“There wasn’t that much [conversation between Mercedes]. They told me not to hold him up too much, but like I said, I was also doing my race. I’m not here to let people by.”

Whoa, Valtteri. He always says he doesn’t want to play mind games, but this felt like a little statement of intent. Maybe having a fast teammate won’t be the blessed Mercedes think it is.

“Yeah, I think what made it more tricky for me, I lost a place to Charles on lap one out of Turn 3. [I] didn’t see him actually, so I think he chose a better line through Turn three and got me and then I was stuck behind him for a while and compromised the race a bit.”

The fight with Leclerc was only dealt with after the pitstops because Valtteri couldn’t pass him on track and because this took the whole first stint, he had no chance of winning anymore, but his pace alone was good.

“I think we had the pace. Lewis showed that he could win the race, and I don’t think [my] pace was dissimilar. So it’s a bit of a shame. But here, track position is so important. It’s tricky to follow and to pass.

“I knew when I was P4 it was going to be tricky, but we made it to the podium and outscored Red Bull. I think it’s just small details today. It was Lap 1, turn three. I think otherwise the pace was there.”

Was Bottas right to make life more difficult for Hamilton to overtake? Let us know in the comments below. 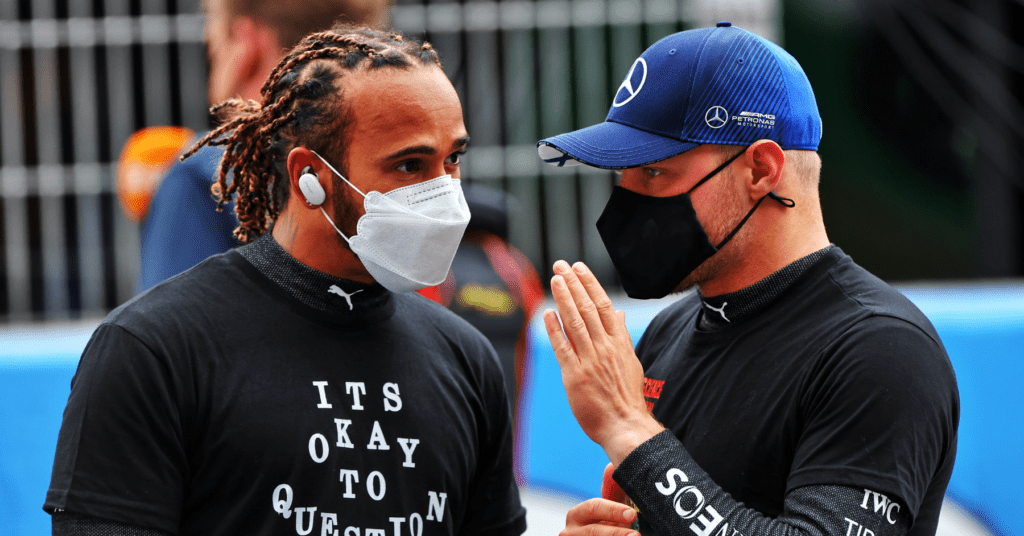