With Lewis Hamilton’s Austrian Grand Prix compromised following a gearbox penalty there’s a high chance of him losing further ground to title rival Sebastian Vettel this weekend as he has to start from down in eighth place.

His teammate Valtteri Bottas has helped the situation somewhat by putting in a stonking lap to steal pole from the Ferrari driver, but said there’s no plan for him to try and hold up Vettel to try and help Lewis catch up. Bottas said:

“From what I have seen in the pre-race strategy notes, that kind of plan is not on those notes. We need to focus on trying to have a good start to the race and we need to win the race. Lewis can fight back from where he is starting. If you start playing games it gets tricky, if the car behind gets DRS and the slipstream, then with just one mistake they can get the win.”

Lewis knows a thing or two about backing up other drivers, having done so in his attempt to beat Nico Rosberg to the title last year. He also asked Bottas to slow down in Baku to try and back Vettel towards him, but this time Hamilton says he has no expectation for his teammate to help him with his title bid, despite being 28 points ahead of him in the championship.

“It makes no sense for Valtteri to slow down, so he will push as hard as he can to win the race. Valtteri has been quickest all weekend, so [winning] it’s not really in my mind at the moment,”

In 2014 Hamilton started ninth and came up to finish second, but things have changed a lot in those few years – for one thing, Mercedes isn’t as utterly dominant as it was back then.

Hamilton said that repeating that performance and getting up and on to the podium this year would be more difficult.

“I am pretty sure back then there was a bigger difference of speed delta with the other cars. It is more unlikely than it was then, but I will give it everything I can and of course I will be happy if I get up there.”

It’d be cool if he could get up there – after Baku I think everyone wants to see what will happen if Hamilton and Vettel meet each other on track.

Do you think Hamilton can recover to the podium tomorrow? Let us know in the comments! 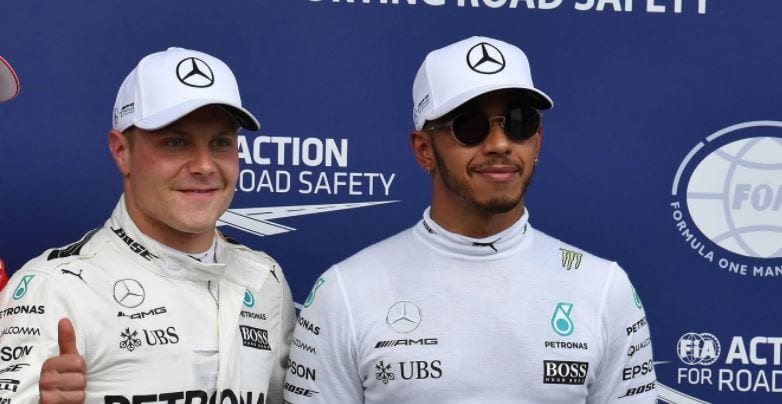