Bottas Thought About Staying On A One-Stop Strategy To Try And Beat Hamilton – WTF1
Skip to content
×
Formula 1 , News

Despite looking set for another one-two finish to start the 2019 season, Mercedes decided to cover off the threat posed by third- and fourth-placed men Sebastian Vettel and Max Verstappen – who had stopped for fresh sets of tyres the two laps beforehand – by calling in both race leader Lewis Hamilton and Valtteri Bottas on lap 36 of 56. Fortuitously for Bottas, his gap to Hamilton and the slick work of the Mercedes pit crew meant that he did not have to queue behind his team-mate and lose valuable time to Vettel and Verstappen, ensuring that Mercedes equalled Williams’ 1992 record of three consecutive one-two finishes to start a season.

Yet, the bearded and now former championship leader said that he had other plans for his strategy. He believed that staying out could have handed him a golden chance to take a second victory of the season, having spurned the advantage he had from pole position. He told Motorsport.com:

“I was questioning [it] because if I could do something different, other than stopping behind Lewis, that was going to be my only chance to win the race. I knew if we were [both] coming in, that’s going to be pretty much it unless something crazy happens. For me, I maybe wanted to take the risk but now, looking at it, I don’t think the tyre wear would have been enough.”

Bottas added that he was concerned by the chance of a mishap in the quick changeover. Had Mercedes put Bottas’s tyres on Hamilton’s car, or vice versa, the reigning champions would have faced leaving China with a (slightly) lighter wallet, two disqualifications and no points.

But, he accepted that the decision was ultimately the correct one for Mercedes. With tyre degradation being such a crucial factor at Shanghai, Bottas could have fallen like a stone and ended up without a podium, along with a significant deficit to Hamilton at the top of the championship picture.

“I was very concerned. You know you’re going to lose time being the car behind, but it was due to the start that I was in that position. I was questioning the team – if I could stop later, or carry on without stopping – but there was too big a risk in terms of tyre life, if we can make it or not. But I’m glad the stop went well. I lost some time, but minimal, so the team did a good job on that. And now, seeing all the data just briefly, from the team’s point of view I think it was definitely the right thing to do, to make sure we were going to be one-two.”

This pit crew. This double-stack! 🔥🔥

Team boss Toto Wolff justified the strategic risk and praised his mechanics for an unbelievable routine. He explained that Bottas was under slight pressure from Vettel, who would have had the chance to pass the Finn using the undercut if left any longer. But Wolff went on to say that if Bottas came in and Hamilton stayed out, he could have lost the lead and left Mercedes looking a touch foolish. However, unlike Ferrari when they make a strategic balls-up, a one-two would probably still have been on the cards.

“So we didn’t want to interfere with the order, so that’s why we decided to stack. We knew we just about had the gap to stack them properly and gave the commitment to Valtteri that we wouldn’t lose him any time, and it was really impressive how the guys did it.”

A textbook example of how to deal with a tricky situation. It’s just a shame that immaculate pit stop coordination was one of the highlights of F1’s 1000th grand prix. 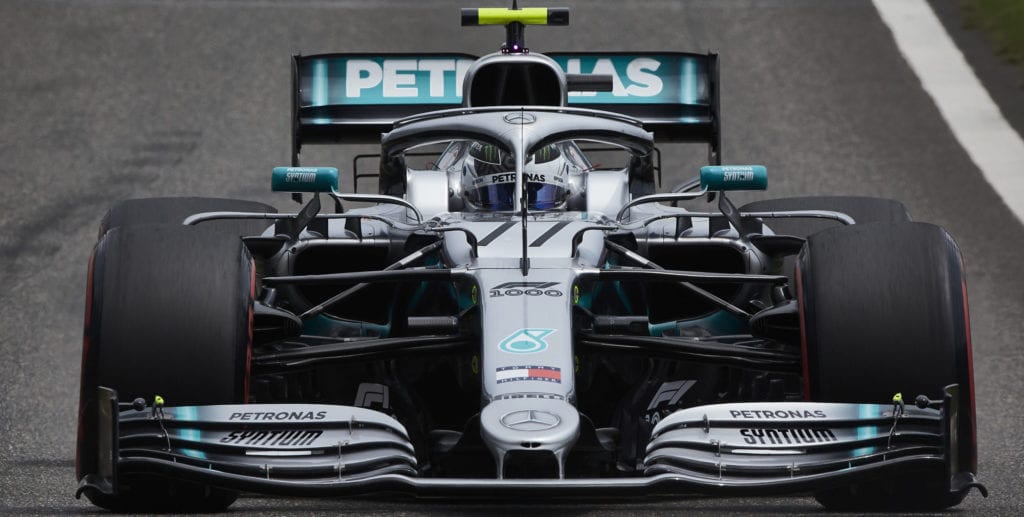