At one point, just reaching the finish of the Austrian GP looked like it was going to be an achievement. We never got a chance to see whether Max Verstappen’s alternate strategy would have worked out because his Red Bull broke down early on. Daniel Ricciardo and Lance Stroll also dropped out early with reliability problems and after the majority of the pit stops were completed during the first safety car period, the main story looked like being between Bottas and Lewis Hamilton, who’d quickly recovered from his last-minute grid penalty.

However, there was then drama at Mercedes as reliability became a genuine concern. Both drivers had to repeatedly be told to stay off of the kerbs, costing them both pace and the chance to really fight each other. That all changed when the safety car was deployed for a second time, this time due to George Russell’s stricken Williams.

This is where things got spicy. Some drivers further back decided to take another pit stop for fresh tyres, including Alex Albon, who’d run third for most of the race. Suddenly, he looked like a genuine threat for victory, but the wait to see whether he would be was extended when another safety car was deployed after the front right wheel on Kimi Raikkonen’s Alfa Romeo made a bid for freedom.

At the restart, Albon was on it. He launched a move around the outside of Hamilton at Turn 4 and looked to have it done. But, in a repeat of Brazil last year, Hamilton made a rare error and tagged Albon into a spin, not only costing him the chance of a maiden podium, but probably even the win.

Hamilton was handed a five-second penalty for the contact, leaving the final laps as a mad fight for a net second and third. Charles Leclerc made it past Lando Norris and Sergio Perez to secure a surprise second after a dreadful weekend for Ferrari. Third was still wide open, though. Perez was struggling a bit having elected not to pit during the second safety car and then being given a five-second penalty for speeding in the pit lane, while Norris was struggling to fend off his teammate.

Lando eventually settled and barged his way past Perez at Turn 3, but the scrapping made it look like he’d lost too much time to the cars in front and Hamilton looked set to secure third, even with his penalty.

Norris had other ideas. On the final lap he threw everything at it, setting the fastest lap of the race and just gaining enough time to pinch third from Hamilton and secure his first podium.

Hamilton ended up fourth ahead of Sainz, with Perez a slightly underwhelming sixth. Pierre Gasly and Esteban Ocon stayed out of trouble to finish seventh and eighth, Antonio Giovinazzi took ninth, and Sebastian Vettel was a very disappointing 10th, having had a sBin in a clumsy move trying to pass Sainz earlier on. Nicolas Latifi just missed out on a point on his debut with 11th… and he was the final finisher. Albon had some sort of issue after his spin and retired, while Daniil Kvyat had a dramatic suspension failure with two laps to go. That makes nine retirements from the race – none of which were down to driver error or collisions.

As ways to start the season go, it’s hard to get much more exciting than that as once again the Red Bull Ring proved to be a surprisingly tough track for the teams.

It’s a dream start for Bottas to not only get one over on Hamilton on the first weekend of the year, but to see his teammate – and probably only real rival for the championship, based on the pace of Mercedes this weekend – have a bit of a scruffy one.

And you know what the best thing is? We get to do it all again next week! 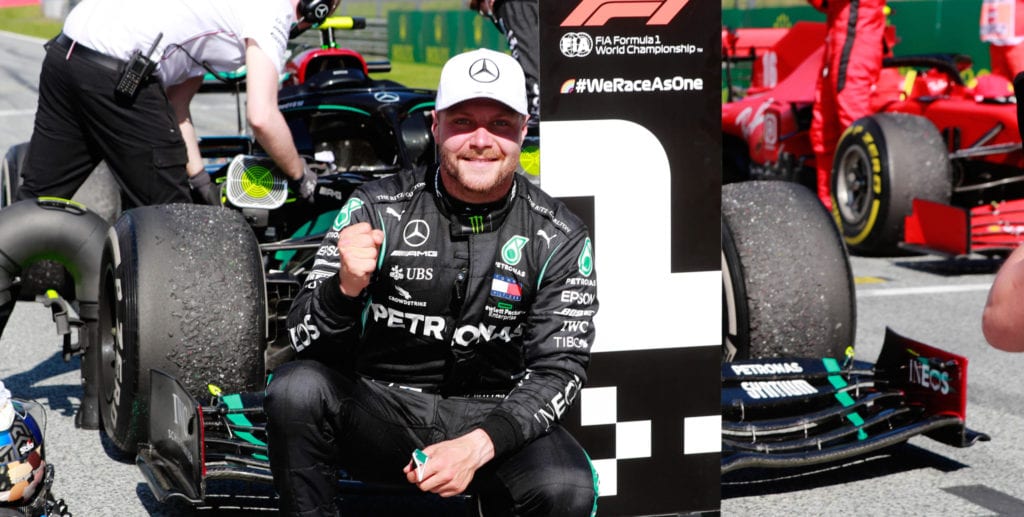