Chadwick Has Just Become The First Ever W Series Champion

Having taken a superb pole position in the dying seconds of qualifying, Chadwick was in a solid position to become the first W Series champion: all she had to do was finish on the podium to take the title, with sole title rival Beitske Visser needing to find a way to overcome a 14-point deficit.

As ever with motorsport – especially a title decider – that’s much easier said than done. Although Chadwick held her lead at the start, she wasn’t able to pull out a gap as Alice Powell stayed right on her gearbox. Approaching half distance, Powell launched one up the inside of Chadwick into Paddock Hill Bend.

Remarkably, despite not really needing to, Chadwick attempted to fight her off and hung on around the outside as the fight continued up to Druids.

Powell took the lead as Emma Kimilainen then got involved and followed Powell through on the inside. Chadwick was now third and, to make matters worse, was now under pressure from Visser.

Unlike the top two, Chadwick was able to hang on this time, sticking to the inside line going into Hawthorn.

The top two cleared off into the distance and thinks settled down until a spin for Miki Koyama brought out the safety car, bunching everybody back up.

A couple of laps after the restart, Visser then pulled off a critical – and brilliant – pass on the seemingly struggling Chadwick to take third. However, to take the title, Visser would have to rely on Chadwick dropping out of the points if she remained third. Would there be another twist in the tale?

No. Powell took a superb win from Kimilainen with Visser a valiant third. But for Chadwick, fourth – the only race all year where she hasn’t finished on the podium – was enough for a thoroughly well-deserved title. 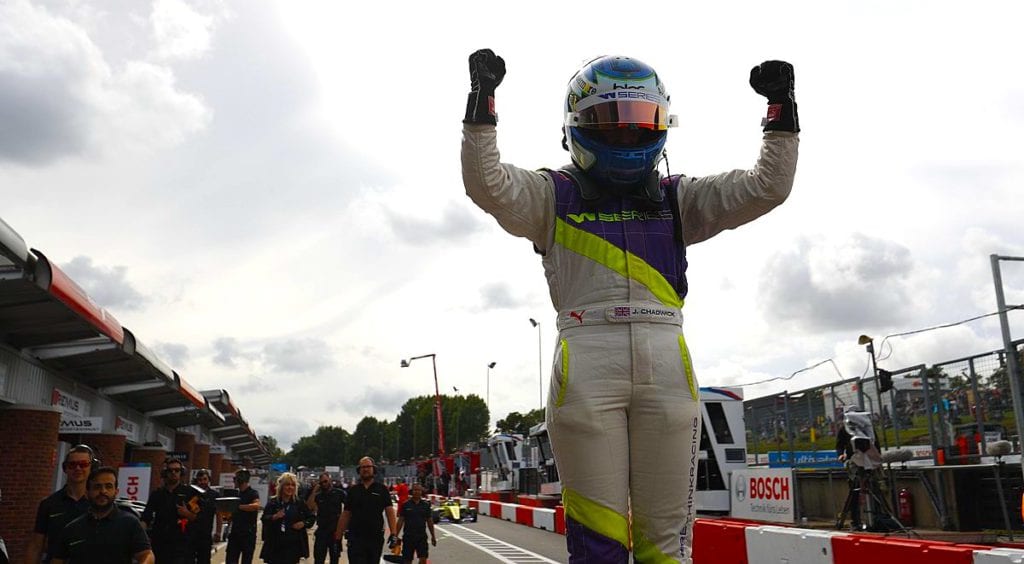