Practice sessions can often be a little bit boring but FP1 and FP2 in Baku were anything but. With two red flags and whopping 113 yellow flags being issues across both sessions its fair to say there were a few struggles going on out there.

Sergio Perez caused the first big incident of the day when he crashed in FP1, but it was FP2 where everything really started to kick off as seemingly every driver had an incident of some kind.

Jolyon Palmer crashed in the same place as Perez had in FP1.

Sebastian Vettel has been held up by Felipe Massa on a couple of occasions this year and it happened again in Baku – but this time it was because they both went down the escape road at turn eight and Vettel had to wait for Massa to recover before he could get out.

Lol! Vettel and Massa having some intimate moment together on track.. #F1 #BakuGP #Fp2 pic.twitter.com/G3h10zfWxA

And of course it wouldn’t be a 2017 Formula 1 session without a McLaren breaking down somewhere. Fernando Alonso lost yet another Honda engine and then had to do a bit of marshaling himself.

Perhaps surprisingly Max Verstappen ended up being fastest in both sessions, but at the end of FP2 even he couldn’t escape an incident. He hit the wall and despite it being a relatively low speed accident the whole back of the car seemed to get ripped off, giving his mechanics a bit of work to do this evening.

All that and it’s still only Friday practice! I hope the marshals have got nice strong flag waving arms, because it looks like being one of those weekends! 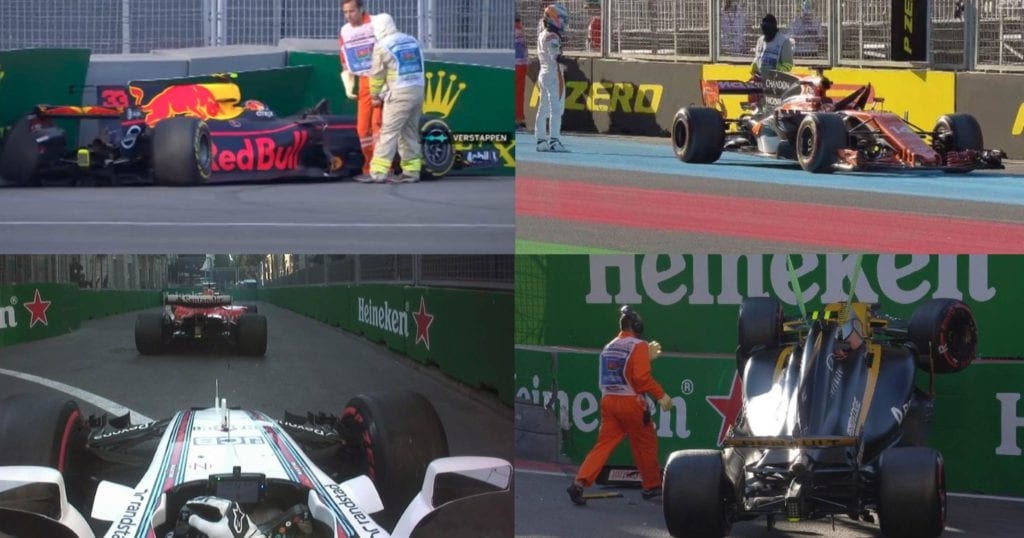