On a day that motorsport mourned the loss of Formula 2 driver Anthoine Hubert, the Frenchman’s friend and former rival held onto his tyres to win ahead of Mercedes duo Lewis Hamilton and Valtteri Bottas – the winning gap just 0.981 seconds. While Ferrari celebrated a long-awaited first win of 2019, Sebastian Vettel could not make the podium on a two-stop strategy.

Max Verstappen started from fifth in front of a partizan crowd, but his race ended in the wall at Raidillon on the first lap having broken his front left suspension in first corner contact with Kimi Raikkonen.

Verstappen and Raikkonen’s contact was one of many events in a chaotic start that saw Leclerc hold the lead, but Vettel fell to third at La Source to Hamilton. The Brit’s advantage over Vettel didn’t last long, the Ferrari’s incredible straightline speed carrying the four-time champion past the Mercedes on the run down to Les Combes as Bottas kept watch.

The stricken Red Bull brought out the Safety Car and neutralised the race until the start of lap 5 of 44. Vettel had intentions on a move into La Source, but a lock-up left him vulnerable to Hamilton and Bottas down the Kemmel Straight. As Leclerc pulled away, Vettel could not shake off the Mercedes – Hamilton noting over the radio that the German’s tyres were getting worse for wear after just seven laps.

At the head of the field, Leclerc set a succession of fastest lap in a bid to scamper away from his team-mate and the rest of the chasing pack. With the undercut predicted to be powerful around the longest track on the F1 calendar, Vettel blinked first on lap 15 for a new set of medium tyres. His gamble looked to have paid off, quickly dispatching of honorary fourth-placed man Lando Norris and hunting down the top three. Leclerc was the next to stop of lap 21, rejoining behind Vettel, while Hamilton and Bottas took fresh tyres on lap 22 and 23 respectively.

It came as little surprise that Leclerc showed the superior pace on fresher rubber, Vettel asked to cede the lead to Leclerc on lap 27. So the top four had resumed its natural order, but Vettel soon found himself under threat from a fired-up and charging Hamilton – who questioned Mercedes’ decision to extend his first stint to the halfway stage of the race. Bottas too was enjoying the battle, using the squabble to close in on his team-mate. Hamilton eventually found his way through at Les Combes in a relatively rudimentary move and Bottas sensed blood. The Finn didn’t have the pleasure of passing Vettel however, as the under pressure German peeled into the pits for a scrubbed set of softs on lap 33.

Leclerc had looked comfortable at the head of the field heading into the last 10 laps, but his tyres started to drop off and Hamilton worked away at the six-second gap. With memories of Bahrain and Austria still etched in the Monegasque’s mind, Ferrari awaited a very nervy finish. By this time, the race had become a two-horse spectacle – as Mercedes turned down Bottas’s engine and the Finn tried to stop his tyres from plummeting off the infamous cliff.

In heavy traffic and a very unusual final lap, Hamilton moved within a second of the Ferrari on the run through Blanchimont and up to the Bus Stop. But he had run out of time, leaving Leclerc to celebrate a first F1 win in a subdued manner.

Norris and Antonio Giovinazzi suffered heartbreak on that aforementioned final lap, the Italian losing control of his Alfa Romeo at Pouhon and slamming into the barriers from ninth place. Further up the road, Norris ground to a halt just past the timing line in fifth place and dropped out the points. The Brit reported on the radio that he was suffering with vibrations on the front left of his McLaren, but the the eventual downfall was a suspected engine problem.

His demise allowed Alex Albon to end an incredible fightback from the back of the grid in fifth place on his Red Bull debut. The Thai driver capped off his performance with daring moves on Daniel Ricciardo and Sergio Perez. He faces a meeting with the stewards about the move down the Kemmel Straight on Perez, with two wheels off the track at the time of the overtake.

Perez has to provisionally settle for sixth ahead of Daniil Kvyat and Nico Hulkenberg. Pierre Gasly ends a difficult weekend in the points in ninth on his Toro Rosso return and Lance Stroll was another man who overcame grid penalties to take a solitary point in tenth.

Carlos Sainz stalled at the start of the race and then stopped on track with complete power issues on lap 1, joining Verstappen in the retirements section.

An action-packed end to a very sombre weekend, and a fitting race victor. 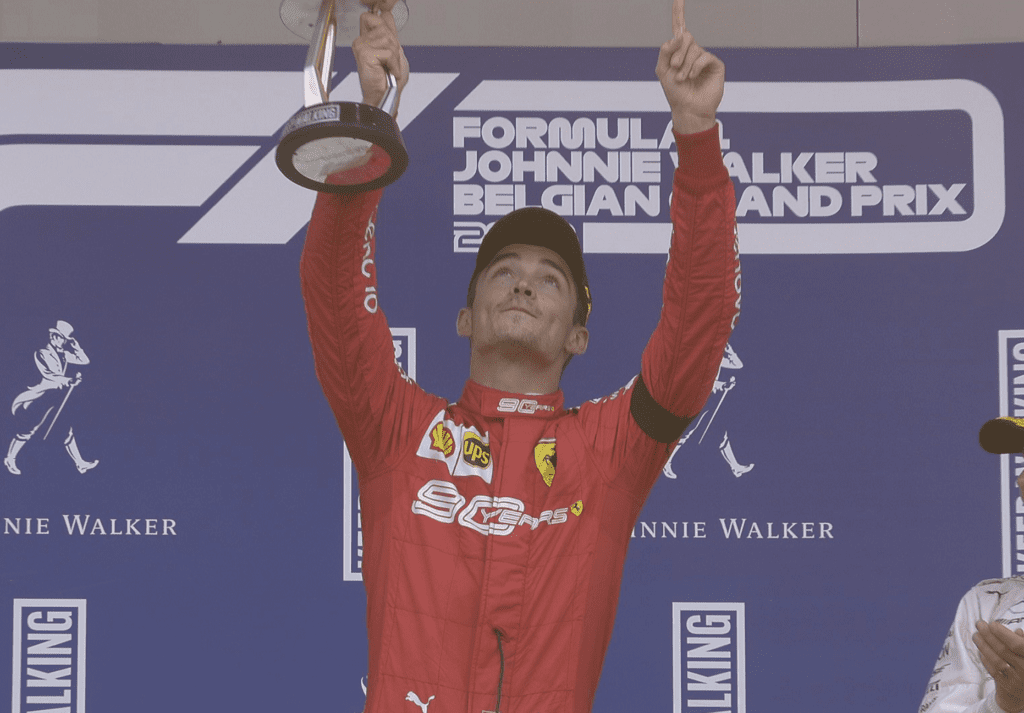