Check Out Some Classic Pre-Qualifying Videos From The Early 1990s – WTF1
Skip to content
×
Formula 1 , Retro

Check Out Some Classic Pre-Qualifying Videos From The Early 1990s

When you think of early 90s F1, you think of the likes of Prost, Senna, and Mansell tearing up the circuits in legendary cars like the McLaren MP4/6, Ferrari 641 and Williams FW14. It’s an iconic era.

It was a session where the slowest teams from the previous half-year (and any new teams, too) would go out on a Friday morning and compete to get a place in the rest of the Grand Prix weekend. The fastest four drivers at the end of the one-hour session would go through, whilst the rest had to pack up and go home.

Even making it through wasn’t a guarantee of starting the race, as with 30 cars in qualifying and only 26 spots on the grid there was still a pretty good chance of failing to qualify!

Pre-qualifying sessions were littered with teams like Coloni, EuroBrun and AGS, and looking back at these old sessions is a great way to see some of the lesser-known cars and drivers in action before attention turned to the front of the grid. So sit back and enjoy some pre-qualifying highlights from the early 1990s.

A bad 1989 season meant Larrousse had to pre-qualify for the first half of 1990. However the chassis that year was now plenty good enough, and getting through was never an issue. Even in a tricky wet session like this and even with Aguri Suzuki binning it, both cars made it through comfortably.

There’s some good shots here too of the hapless (but nice-sounding) Subaru-powered Coloni and the broken Life, which completed a single lap which was well over two-and-a-half minutes off the pace!

Here are the highlights from the next race of the season in France. Both AGS cars went though and Yannick Dalmas actually managed to squeeze onto the grid for the race!

More good footage here of the Coloni-Subaru, though this was the last race of the partnership. The team dropped the flat-12 and switched to Cosworth engines for the rest of the season and Bertrand Gachot managed to escape pre-qualifying for a few races, though he never actually made the grid at all in 1990.

Some footage from Monza, where the Life was still breaking down. Following this event the team switched the dreadful W12 engine for a more conventional Judd V8, but that was little better and two races later the team disappeared for good.

On to 1991 and as a new team, Jordan had to go through the hassle of pre-qualifying. The slippery track was typical of the conditions teams had to face on a Friday morning as they were the first cars to venture out on the circuit all weekend – a particular challenge on street tracks like this.

Scuderia Italia and Jordan were comfortably the quickest teams in pre-qualifying in the first half of 1991, and by the mid-point of the season both teams were ‘promoted’ out of the process. Great to see the unusual-but-pretty Modena in action here too – that Lambo engine sounds amazing!

Although Emanuele Pirro couldn’t escape pre-qualifying this time, his Scuderia Italia teammate JJ Lehto did – and went on to finish third in the race!

Coloni was now running on a shoestring (the entire team consisted of only six people!) and had no chances of making the cut with the inexperienced Pedro Chaves. The team didn’t make it out of the session all year. 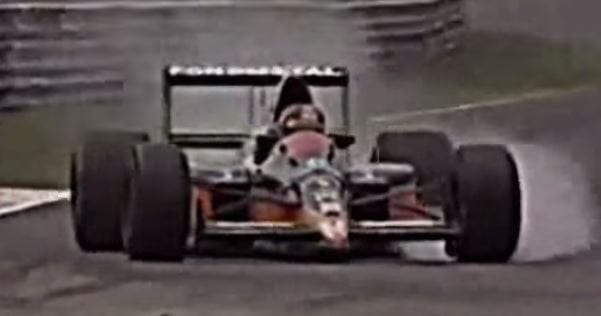