Christian Fittipaldi Backflipped Across The Line At The 1993 Italian GP And It Was Awesome – WTF1
Skip to content
×
Formula 1 , Retro

The 1993 Italian Grand Prix was memorable for a few reasons. Damon Hill took victory after teammate Alain Prost had an engine failure with a few laps to go, delaying his fourth championship until the next round in Portugal.

Michael Andretti finally got his McLaren onto the podium in what would be his last F1 race and Riccardo Patrese’s fifth place turned out to be the final points he’d score in his long 17-season career.

But the abiding image of the race was the finish between the two Minardi drivers, Pierluigi Martini and Christian Fittipaldi. They were battling over seventh place – not bad considering they’d started 22nd and 24th respectively – but their duel almost ended in disaster when they made contact on the final lap.

Fittipaldi had a run on Martini as they approached the line and pulled out of his slipstream to attempt the pass. Martini saw him coming and moved over to defend, causing his teammate to clip his rear wheel and send him flying up into the air at 190 mph.

Understandably Fittipaldi was furious with Martini for moving across on him at such a high speed as it could have been much, much worse. As it turned out, it ended up being one of the most spectacular ways to finish a race ever as his car came back down on its wheels and rolled across the line to finish eighth.

That might not have been worth any championship points back then, but in terms of style points it’s off the scale! 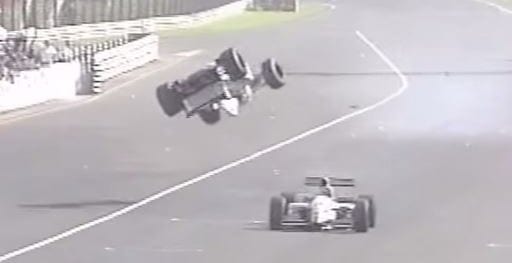