Could Red Bull Have Done Anything About Hamilton’s Strategy? – WTF1
Skip to content
×
Formula 1

Could Red Bull Have Done Anything About Hamilton’s Strategy?

The moment Mercedes pitted Hamilton for a second time, it was obvious that he’d return to the track with a faster car. The question was how long it would take him to get up to speed and how much quicker he’d be. If it took him a while, Red Bull might have had one lap to bring Verstappen in. The problem was that when Hamilton came into the pits he was right on Verstappen’s tail and that, coupled with a fast outlap, meant that if Red Bull had reacted, it would have cost him track position, as Christian Horner confirmed to RaceFans after the race:

“By halfway round [Hamilton’s] outlap he was already neck-and-neck which means by the end of the lap [Hamilton] would have been ahead. So we didn’t have the ability to then cover with Max by stopping him on the next lap because it would have conceded track positions.

“He started to use the tyre harder than he would have would have liked and he was able to hold the gap until they passed through all the traffic. Then as soon as they got into clear air that’s when Lewis really started coming. With three or four laps to go, with such a grip advantage, Max was a little bit of a sitting duck.”

So, pitting the lap after Hamilton was right out. But there was another moment where, potentially, Red Bull could have stopped Verstappen and had a chance of winning.

For a few laps after Hamilton’s stop, he had to negotiate traffic while Verstappen was in clear air. During this time, the gap between the two stayed fairly static – on lap 52, Hamilton was 16 seconds behind; five laps later he was still 15.4 seconds behind. At this point, he hit clear air, the Red Bull’s tyres hit the cliff. Hamilton pulled in seven-tenths on lap 57 and then gained well over a second a lap until he overtook Verstappen at the start of lap 67.

Verstappen then put the soft tyres on and set a lap 1.4 seconds quicker than Hamilton’s best effort. That’s a huge margin, which makes you wonder if there was a point where Red Bull could have pitted him earlier, switched to the softs, and then gone after the Mercedes.

Had Verstappen pitted for softs with a 15 second lead on lap 56 as Hamilton cleared the last of the traffic, he’d have rejoined five or six seconds behind with 14 laps remaining and a fresher set of the faster tyres. From then on he’d have needed to gain half a second a lap to be on Hamilton’s gearbox. Since he was 1.4 seconds quicker at the end of the race, that should have been no problem, right?

Not quite. Had he pitted, Verstappen would have emerged in the same traffic that halted Hamilton’s progress, potentially costing him a few laps of charging time. And although he set a rapid time on softs and despite the fact Sebastian Vettel did a long, competitive stint on the reds, there’s no guarantee that they’d have held such an advantage (if at all) over the mediums for that many laps.

The biggest no-no to this strategy, however, would have been giving up track position. That’s absolutely crucial at the Hungaroring and at the moment he could have pitted, they couldn’t have known that his tyres would drop off as much as they did. Giving up the lead for a chance of beating Mercedes at their own game would have been a much, much bigger risk.

Plus, in this scenario, even if Verstappen did catch Hamilton at the end, who’s to say he would have passed him? For much of the first half of the race, Hamilton couldn’t pass Verstappen despite enjoying:

1) A car with more power
2) A car that was overall faster
3) Fresher tyres
4) Verstappen being slowed by traffic.

Without the benefit of three of those advantages, Verstappen’s chances of getting ahead would be almost non-existent.

On top of that, we don’t know how much more pace Hamilton had in reserve. From lap 58 until he caught the back of the Red Bull on lap 66, Hamilton’s lap times went from 1:18.5 to 1:18.8. The moment he was ahead, he started going two seconds a lap slower.

As well as being very consistent, if he was pushing to the max (pun intended), you’d probably expect a faster initial lap time with a slightly bigger drop off. As it is, it wouldn’t be surprising if Hamilton was merely pushing as much as he felt he needed to, especially once it became clear that Verstappen’s tyres were gone. There wouldn’t be much in it but if Verstappen was the one chasing him down, we might have seen another few tenths of pace come from that Mercedes.

In hindsight, there was a brief moment on lap 56 when Verstappen could have pitted and perhaps had a chance to challenge for the win. But everything is easier in hindsight, and you can’t criticise anything that Verstappen or Red Bull did – given the situation of the race, Mercedes held all the cards. Their only chance of winning was staying out and hoping that either Hamilton’s tyres dropped off or that Verstappen’s tyres held on for longer. Or maybe, if Hamilton only caught him on the final lap, then Verstappen could have risked an all-out defensive manoeuvre that pushed the regulations. With four laps left and a car several seconds off the pace, that simply wasn’t worth it.

So, to answer the question in the title: could Red Bull have done anything about Hamilton’s strategy? Yes – but only in the same way that they could have ordered Pierre Gasly to take one for the team and hold up Hamilton while being lapped.

Finishing second isn’t that bad anyway – Verstappen took pole, led much of the race, and was fast enough to force Mercedes into taking a strategy gamble and Hamilton to have to pull off a fantastic drive. In its own way and considering where Red Bull and Honda have been in the hybrid era, that’s a different kind of win. 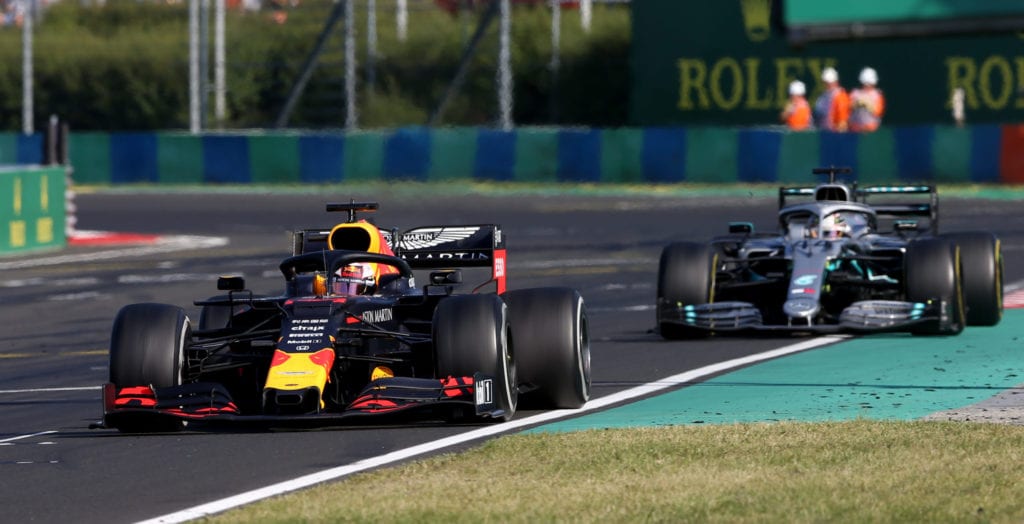