Did Ferrari’s Poor US GP Prove It Was “Cheating” With The Power Unit? – WTF1
Skip to content
×
Formula 1

Did Ferrari’s Poor US GP Prove It Was “Cheating” With The Power Unit?

Ferrari’s power unit has been a subject of discussion over the past few races as rivals have questioned whether or not the way the car produces such immense straight-line speed was entirely legal. Amidst threats of a protest (which Ferrari has said it would welcome) a technical directive was issued by the FIA this weekend clarifying an illegal fuel-flow technique which it’s believe some suspect Ferrari to have been using.

Following the team’s dismal race, Max Verstappen had a strong theory as to why Ferrari was so slow, telling Dutch broadcaster Ziggo Sport that “That’s what happens when you stop cheating.” Wow. He reiterated that view again in the post-race press conference (albeit slightly more coyly) when asked about it, saying “Not surprised at all about it [Ferrari’s bad race]. After what came out. So that explains everything.”

It seems that Mattia Binotto took exception to Verstappen’s comments as he was spied in the paddock later on having a word with Christian Horner. Charles Leclerc wasn’t happy either, telling Autosport:

“I think it is a joke to be completely honest. He has no clue. He is not in the team. We know exactly what we are doing. I don’t know why he is speaking. He doesn’t know anything about us.”

The coincidence is hard to ignore. Ferrari has been in contention for wins in just about every race since the summer break. Suddenly, in the first race since the technical clarification, both drivers struggle badly in the opening laps and Leclerc winds up almost a minute behind the winner. So, has Ferrari been forced into losing its advantage, or was it something else?

In qualifying, Leclerc and Sebastian Vettel were down in eighth and ninth in the speed trap at the end of the back straight. However, they topped the charts going across the start-finish line, and at least one of them was in the top three for top speeds in the other two intermediate splits. In the race, Leclerc topped the speeds in two of the three splits, was second in the other, and finished down in 13th in the main one on the back straight. That can be explained by the fact he didn’t exactly spend a lot of time with DRS and slipstreams during the race, and topping the speeds in the sectors is likely down to the fact he pitted for fresh softs near the end and went for the fastest lap.

Another factor to consider is that following his problems in FP3, Leclerc had to run the rest of the weekend with a very used version of an older-spec engine, which would likely result in a little less power. So, all-in-all, it’s a little inconclusive, then.

But if the engine isn’t to blame, what exactly is it that made Ferrari so slow? Both drivers had disappointing opening laps (Vettel’s was especially terrible) and both reported that the car felt strange – Leclerc said the front-left on his first stint felt “very, very weird”, while Vettel said that it took him several laps for his tyres to ‘switch on’ before suspension failure took him out of the race. In Leclerc’s case, much of his time loss to the leaders happened during that first stint and although his pace wasn’t exactly brilliant after that, it’s not like the car was slow throughout the race.

For whatever reason, it seems that the SF90 wasn’t able to get the medium tyres in their operating window at the start of the race. That wouldn’t explain the low top speeds, though – and on a circuit with a straight as long as COTA’s that seems worrying.

Except, even though the circuit does have a couple of long straights, it also has plenty of fast, flowing corners and tight technical sections which demand serious downforce. For all of its plus points, the SF90 has never been the car to beat in the corners and it’s an area where Mercedes and Red Bull have generally had the edge.

That’s been evident for a while, even at Spa and Monza where you’d have expected Ferrari to run away with the power advantage. It was true in qualifying, but come the races Leclerc had a tough job to keep ahead of Lewis Hamilton. It’s been true in every race since – Ferrari qualifies well, then has to fight to hold the positions in the race. It seems their entire philosophy has been to build a car quick enough to start at the front, and then maintain the position from there.

There’s also the point to consider that Ferrari doesn’t have its incredible boost mode available all the time. The drivers use it for a couple of laps in qualifying and then on a handful of occasions during the race. That might be worth a few seconds over the course of a grand prix, but it doesn’t explain a deficit of 52 seconds. If Ferrari has had to remove whatever system it’s been using, we’d have seen them struggle in qualifying too. Vettel was just 12-thousandths away from a fired-up Valtteri Bottas, so in qualifying trim at least, all appears to be well.

So, is Verstappen on the money when he says that Ferrari no longer has its power advantage? It’s a bit too soon to say given that it’s only been one race and that COTA isn’t necessarily a track that suited the car.

A far bigger test will be when we get to Interlagos in two weeks’ time. That big, long pull up the hill should be prime territory for the SF90, and the finale in Abu Dhabi should also be a good opportunity for them to stretch their legs. If Vettel and Leclerc are off the pace at those tracks too then yeah, maybe we can start to suspect that the team has quietly dropped whatever trick it was pulling with its power unit. Until then, Verstappen’s accusations are probably little more than a touch of mind games. 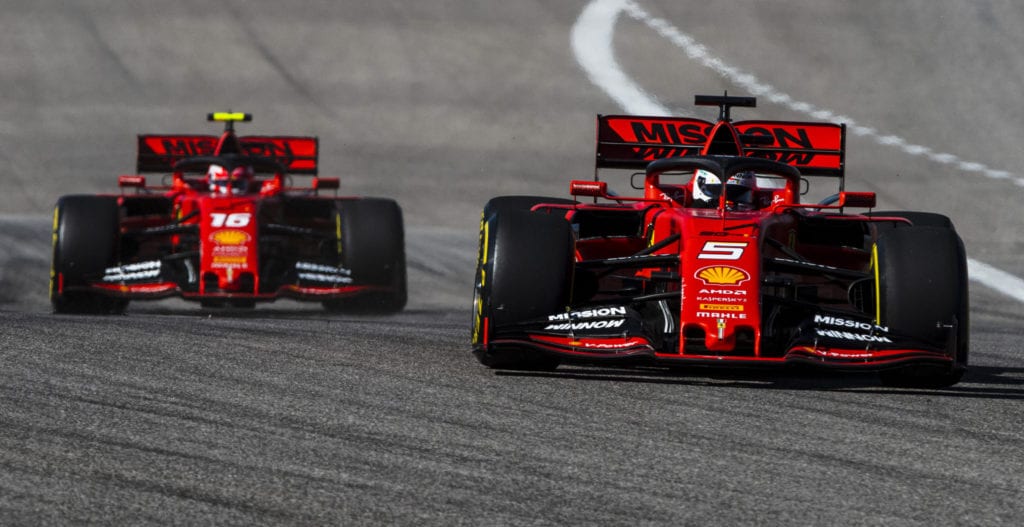