Did You Know That Motorsport Was Once Part Of The Olympics? – WTF1
Skip to content
×
Feature , Fun , Retro
3 comments

Did You Know That Motorsport Was Once Part Of The Olympics?

It seems very unlikely we’ll ever see motorsport at the Olympic games. The committee doesn’t recognise machine-based or motorised sports, so motor racing doesn’t stand much chance. However, there was once a time, over 100 years ago, when motorsport was a part of the Olympics.

Although we’ve seen a few Olympic and F1 crossovers, with Fuji International Speedway being used in the cycling events in Japan this year and the Sochi Autodrom being built around the complex that was host to the 2014 Winter Olympics, there’s still no plans for motorsport in the games themselves.

The Olympics are the peak of sport. It’s where all the big names compete against each other at the same time, but motorsport isn’t involved. Nevertheless, there’s a case to be made for motorsport to feature at the modern Olympics. I mean, they have sports like sailing, which might not be motorised but still requires elite control of a vehicle.

Of course, the drive comes from a power unit and not from the athlete, but the expert control of a kart, or maybe a one-make car, is a skill and could fit in at the Olympics nicely.

Just imagine seeing Lewis Hamilton for Great Britain, Daniel Ricciardo of Australia, and Kevin Magnussen for Denmark have it out in equal machinery, all hoping to win Olympic Gold. A pure race between athletes. It would be pretty cool!

Well, once upon a time, motorsport did have a place at the Olympics. It was a long time ago and was quite a strange event, but at the end of the day, drivers were racing for Gold, Silver and Bronze in race cars.

The year was 1900. Paris was hosting the Olympics, only the second modern games ever, and part of it was 14-car races! These were for different vehicle classes, ranging between how much the car weighed and how many seats it had. It was definitely a race for the cars rather than the drivers.

In fact, the entries were done for the manufacturer rather than the driver, so when races were won, the trophy – they didn’t have medals until the 1904 Olympics – went to the company rather than the driver. This means that there isn’t a competitor name for nearly all the statistics, only the model of car that they drove. For a lot of them, there’s no record of the car either. Yes, record-keeping wasn’t as good as it is now, but it’s all very mad even then!

This classic race track was renewed by Tilke in 2005 to receive @f1 in 2007 and 2008. It's great to see it hosting such a historic international event. #Tokyo2020 #Olympics pic.twitter.com/KKbtQ1NK7y

Some of these mighty fights included the taxi and delivery van races! These were run twice, once for those powered by petrol and again for electric-powered versions. So the Olympics (sort of) held the first-ever Formula E race!

Other notable races included the truck race, where four cars all got Gold, and no one got Silver or Bronze. There were seven-seater car races where for some reason, a Gold and Bronze weren’t awarded, but Silver was and the fire truck race (yes, fire truck) where American Gilbert Brown became the only non-French winner!

As you can probably tell, motorsport at the Olympics was a bit of a mess.

In fact, the whole 1900 games were a bit of a mess. The IOC was supposed to meet to determine which sports were “Olympic”, but they never did, and a whole manner of unofficial events took place. Which I’m afraid to say is the case for these races. Unfortunately, it was also the case for the cannon shooting, pigeon racing and kite-flying competitions too—sad times.

The races were unofficial mainly because they were held in partnership with the World Fair, a tech innovation exhibition. To be honest, it seems a lot more likely that these races were done as ways for the manufacturers to show off at the fair rather than as a proper sporting event, but they took place as Olympic races and were awarded Olympic prizes, so it gets a bit murky.

Either way, these were car races at the Olympic games! How cool is that?!

The chances of it happening ever again are basically non-existent so despite it being an absolute shambles, let’s savour this weird and wonderful story from motorsport history!

For now, we’re just going to have do with the Race of Champions. 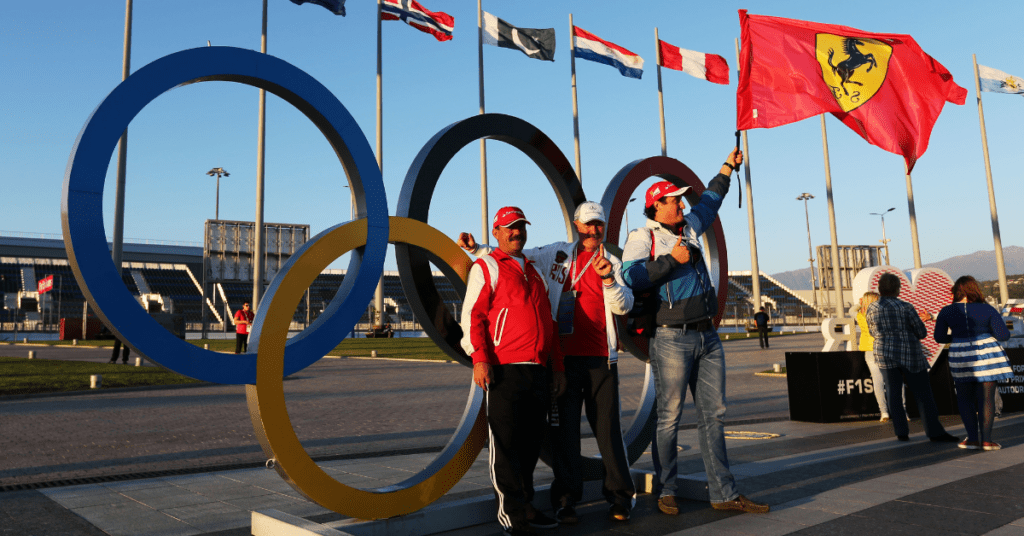