Did You Know These Crazy Facts About The Turkish Grand Prix Podium? – WTF1
Skip to content
×
Formula 1 , Fun , Statistics

Did You Know These Crazy Facts About The Turkish Grand Prix Podium?

When the trio of Hamilton, Perez and Vettel all stood on the podium after the action-packed Turkish Grand Prix at Istanbul Park, most of us were still trying to process what had actually just happened. However, there was much more to that podium than just getting the nationalities of Vettel and Perez mixed up.

Firstly, that podium was the most decorated of all time.

Now, I know what you might be thinking. “What about the 1993 Spanish Grand Prix when we had Schumacher, Senna and Prost all on the podium?”.

With their total of 14 drivers’ championships it remains one of the most successful podiums of all time, but when that podium actually happened Schumacher had not won a single title yet.

For the 2020 Turkish Grand Prix – at the time of the celebration – Hamilton and Vettel had earned 11 drivers’ titles between them when they were stood on that podium. It’s the most number of existing titles we have seen on a podium ever, oh and Sergio was there too.

This was also the 56th time the pairing of Hamilton and Vettel have stood on a podium together – the most in the sport’s history.

It all seems such a long time ago when the two celebrated their first podium at the 2009 Japanese Grand Prix, when Vettel won the race, followed by Jarno Trulli and Hamilton in third.

Another interesting statistic is that Vettel, Hamilton and Perez were also the only three drivers on the current grid to have taken part at the previous race in Turkey back in 2011.

We think this is just more total coincidence more than anything, but who doesn’t love an F1 conspiracy theory.

Did you enjoy the Turkish Grand Prix podium as much as us? Let us know in the comments below. 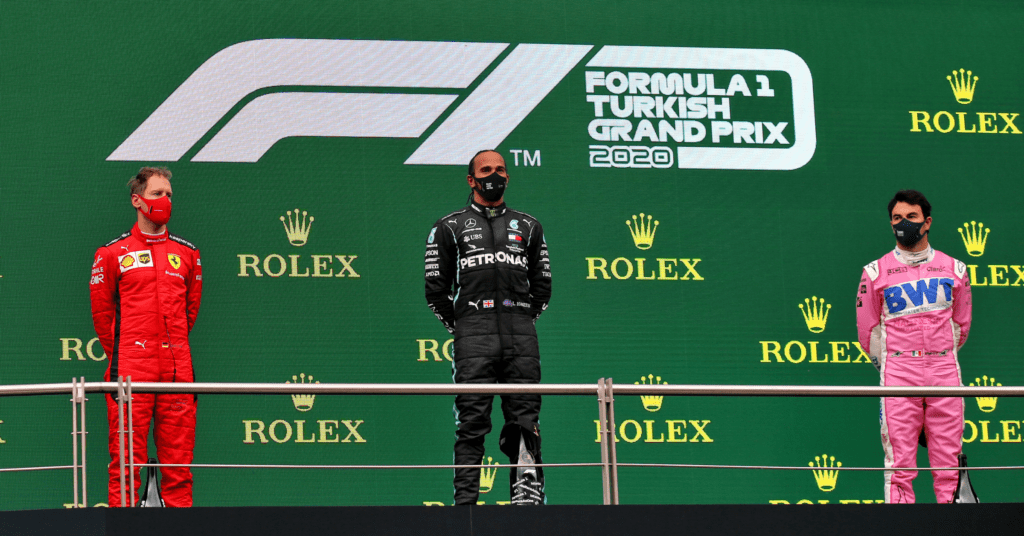