Disgraced Moto2 Rider Romano Fenati Has Been Sacked By His Team

Motorsport fans everywhere were left with their jaws on the floor following Fenati’s incredible outburst during the race, in which he reached over and grabbed the brake lever of a rival. He was black-flagged from the race and later given a two-race ban – which wasn’t enough in the eyes of many.

The ban now seems almost irrelevant, though, because his team has decided to sack him altogether. A statement read:

“Now we can communicate that the Marinelli Snipers Team shall terminate the contract with the rider Romano Fenati, from now on, for his unsporting, dangerous and damaging conduct. With extreme regret, we have to note that his irresponsible act endangered the life of another rider and can’t be apologised in no way.”

For next year, Fenati was set to change teams to the Forward Racing squad as MV Agusta makes its return to GP racing. However, the Instagram post of MV Agusta president Giovanni Castiglioni made that appear unlikely to happen.

This has been the worse and saddest thing I ever seen in a bike race. True sportsmen would never act this way. If I would be Dorna I would ban him from world racing . Regarding his contract for a future position as rider of MV Agusta Moto 2 , I will oppose myself in every way to stop it . It won’t happen , he doesn’t represent our company true values ⚔️⚔️⚔️ #mvagusta #rc #moto2 #fairplay

Indeed, Forward Racing then went ahead and ended the contract. Team owner Giovanni Cuzari said in a statement:

“After the disgraceful episode between Romano Fenati and Stefano Manzi, it is impossible for the team to maintain its planned collaboration with the rider from Ascoli for the 2019 season.

“Fenati’s behaviour is incompatible with the sporting values of the Forward Racing Team and of MV Agusta. For this reason, though we bitterly regret it, we are forced to cancel our project with Fenati.”

Fenati did issue an apology for his actions, but it appears to be too little too late.

“I apologise to the whole sports world. This morning, with a clear mind, I wish it had been just a bad dream. I think back to those moments, I made a disgraceful gesture, I was not a man.

“The criticisms are correct and I understand the resentment towards me. I want to apologise to everyone who believed in me and all those who felt hurt by my actions.”

Fenati is a reasonably successful racer, with 10 victories in Moto3, although he does have a history of acting out – in 2016 he was a part of Valentino Rossi’s own team, but was fired mid-season due to ‘behavioural issues’.

In 2015 he lashed out during warm-up for the Argentine GP, kicking Niklas Ajo and then switching his bike off on the grid.

OK, so switching the bike off was kind of a funny thing to do, but it seems like his latest move is one outburst too many. It’d be amazing to see him on a GP grid again, and any sort of decent racing career will take some serious work. 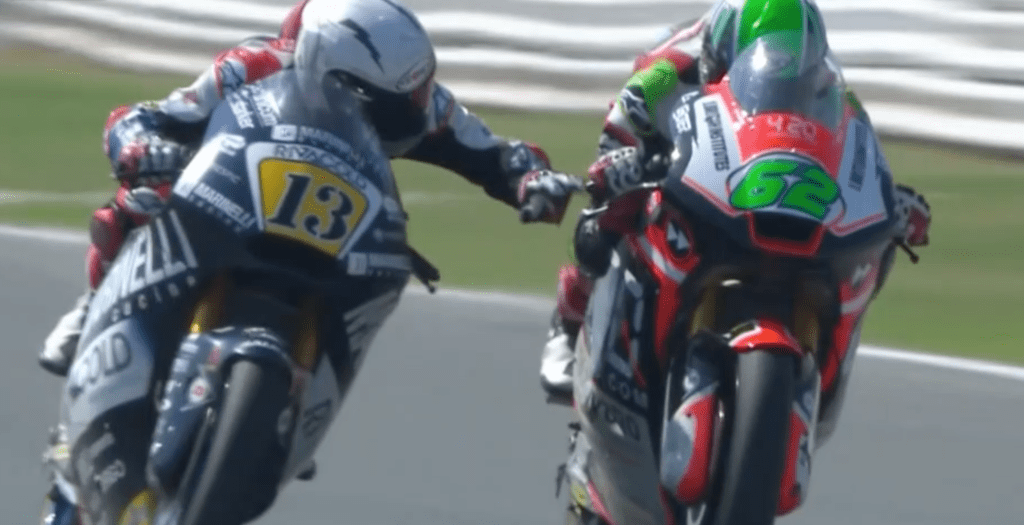