Do Fast Lap Times In Pre-Season Testing Really Mean Anything?

Sebastian Vettel’s record-breaking lap on the penultimate day of testing not only showed the pace of Ferrari, but the underlying potential pace of the 2018 F1 cars; when he first pulled out that 1:17.182, it was almost a second quicker than the fastest time we’d seen up until that point.

So, what does it mean? Does Ferrari really have the fastest car, or is it just a bit of showboating? To try and get a better understanding, we thought we’d take a look back over pre-season tests from the last 10 years to see if there’s any correlation between the team that sets the fastest time, the results of the first race, and the results of the entire season. To keep it simple we’re only including the times from the final test that took place before the first race of the year.

During a three-day test at Barcelona it was Ferrari and McLaren heading the timesheets over the first two days, but on day three a few teams suddenly started to show a bit more pace. Fastest of all was Jarno Trulli in the Toyota, with a best lap some four-tenths faster than anyone else.

In Australia it became pretty clear that it had been a bit of a glory run. Trulli and Glock only qualified sixth and ninth. Both retired from the race (as did many drivers – there were only seven finishers!) without having shown anything like front-running pace at any point as Lewis Hamilton won for McLaren.

That was pretty much the way it went for the rest of the season, too, as McLaren and Ferrari (and BMW-Sauber, for a bit) fought it out for title glory. Toyota had a typically Toyota year – the team regularly scored points, and both Trulli and Glock managed a podium, but that lap from Trulli in testing had been little more than a headline-grabbing exercise.

The 2009 pre-season was all about the incredible and sudden revival of the old Honda team as Brawn GP. The team had shown incredible pace at Barcelona with times a second fastest than anyone else, but that year the final test was actually at Jerez, and there it was the Williams of Kazuki Nakajima (of all people) that actually set the fastest lap.

Williams was one of three teams (along with Brawn and Toyota) that started that year with the controversial ‘double diffuser’, and with it offering an advantage it wasn’t all that surprising to see Williams near the top – it had been there or thereabouts for most of testing.

In Australia Rosberg qualified fifth, finished sixth and set the fastest lap, proving that the FW31 definitely had speed. Ultimately it wasn’t up to the level of Brawn, however, and even Red Bull looked quicker.

It actually turned out to be something of a pattern for Williams that year – on multiple occasions Rosberg was fastest in practice, but it never translated to any meaningful results. The team went without a podium, a brace of fourths Nico’s best results. As for Nakajima, the man who’d actually set the fastest time in testing? He scored precisely zero points all season and was dropped at the end of the year.

The fastest time of the final pre-season test of 2010 went to Lewis Hamilton and McLaren. The first race was in Bahrain that year; Hamilton qualified fourth and finished third with Jenson Button down in the lower end of the top 10.

With Ferrari scoring a 1-2 and Sebastian Vettel’s Red Bull looking set to win from pole until dropping back with an issue, it looked as though McLaren was only the third-fastest team, despite heading the testing times.

Of course, 2010 turned out to be an epic season with all three teams fighting for the title and McLaren enjoyed plenty of success throughout the year. Even if the MP4-25 was probably the slowest car of the three, it wasn’t by much, and a good drive by either Hamilton or Button on the day would be enough to overcome any small deficit.

In the final pre-season test of 2011 Red Bull frequently looked strong, but it was actually Michael Schumacher’s Mercedes that set the fastest lap, four tenths faster than anyone else.

By the time qualifying for the Australian GP rolled around, however, the Mercedes MGP W02 was almost two whole seconds slower than Vettel’s Red Bull in qualifying. Sure, the RB7 proved to be incredibly dominant, but Mercedes were also way behind Ferrari and McLaren, and occasionally struggled to get on top of Renault, too. Although the car could be quick over a lap, it chewed up its tyres and both Schumacher and Rosberg frequently found themselves slipping back in the races, with no podiums achieved at all.

The whole year was a serious disappointment – topping testing for the first time simply resulted in Mercedes’ least successful season (in terms of race results) to date.

Kimi Raikkonen’s return to F1 after a sabbatical resulted in the Finn topping the times in the final week of testing. In fact, Lotus was fastest on three of the four days and was looking strong.

In qualifying in Melbourne Raikkonen was a shock Q1 exit, but the returning Romain Grosjean provided an equal shock by starting third. In the race Kimi made it up to seventh but Grosjean was Maldonado’d into retirement on lap two, leaving everyone none the wiser about whether Lotus was really that quick.

Although 2012 was a bonkers season with seven different winners from the first seven races, surprisingly the Lotus drivers weren’t among them. Podiums were frequent throughout the year, but it wasn’t until Abu Dhabi that Kimi won a race.

Was it because the Lotus E20 wasn’t as great as its testing form suggested? Possibly, although in later years team members have hinted that the results were limited by the drivers – a crash happy Grosjean and a Raikkonen in need of relearning some things after two years out wasn’t the best recipe for a title challenge. It was probably a bit of both, but ultimately, we’ll never know.

Mercedes really upped the ante in the last couple of days of testing in 2013, with Rosberg ultimately setting the fastest time. Only Ferrari got within a second.

In Australia, Red Bull pulled off a front-row lockout in qualifying, but Hamilton showed the W04 had legitimate pace by qualifying third. Mercedes was still suffering from its rear-tyre issues at this point though, and he slipped to fifth at the end as Rosberg retired and Raikkonen won for Lotus.

Mercedes was well and truly in the hunt for the first part of the season, though – both drivers secured a number of poles, were frequently on the podium, and won three races between them. Then Vettel went on his nine-win streak and Ferrari and Lotus started racking up more podiums, though Mercedes remained second in the constructors’ championship.

Though Pirelli’s mid-season tyre changes (for safety reasons) handed Red Bull the advantage, eight poles from the first 11 races show that the Mercedes probably was the fastest car over a single lap. The testing form wasn’t a complete lie, then…

Into the hybrid era, and although Mercedes would dominate it was actually the Williams of Felipe Massa that set the pace during the final pre-season test in Bahrain.

In Australia though, Williams didn’t actually do that well – Massa and Valtteri Bottas only qualified ninth and 10th, with Bottas going on to finish fifth in the race. The title quickly became a two-horse race between the Mercedes drivers, with Red Bull and Daniel Ricciardo proving the only occasional challenger.

Although Williams finished third in the championship that year, it wasn’t until the ninth round in Austria that the team actually got a podium, which of course came the day after Massa became the only non-Mercedes driver to take a pole position that year.

The FW36 may have been the best car Williams had produced for years, but the testing pace meant nothing – especially with Mercedes so effectively nailing the first year of the hybrids.

Given the way 2014 had gone, there was no surprise in seeing a Mercedes heading the timesheets at the final test, with Nico Rosberg a few tenths ahead of anyone else.

The team locked out the front row in Australia and cruised to a 1-2, but when Vettel won for Ferrari at the next race in Malaysia the prospect of a second year of Mercedes dominance looked far less likely.

Yeah, that didn’t happen. Hamilton romped to the title and whilst Vettel could occasionally challenge, the W06 was simply too good. In fact, it was so good that it wouldn’t be a surprise if the team tried to sandbag in testing, but failed because the drivers found it impossible to drive that slowly.

For the first time in three years it wasn’t a Mercedes-powered car that was fastest in testing, but a Ferrari in the hands of Kimi Raikkonen.

In Australia Vettel qualified third and was in a great position to win until Ferrari had one of its traditional bad strategy calls, handing Mercedes a 1-2. It ended up being a bad year for Ferrari – the podiums dried up in the second half of the season, Vettel started shouting and everyone and everything, and Red Bull pipped the team to second in the constructors’ title as Mercedes swept all again. So much for that early testing pace…

Kimi Raikkonen laid down a marker on the last day of 2017 testing by setting a lap of Barcelona that was almost seven-tenths faster than anything Mercedes had managed.

That pace bore fruit in Australia when Vettel and the Scuderia remedied the issues of the previous year to out-strategy Mercedes and win. Unlike the previous two years, Ferrari not only proved its testing pace was genuine, but managed to make the most of it. A string of wins, poles and podiums made Vettel the championship leader heading into the summer break.

Then it all went wrong, but that was down to a combination of accidents, poor reliability and stunning drives from Hamilton – not because the SF70H dropped off the pace, as Vettel proved by winning the penultimate race of the year.

In fact over the course of the season, all things considered, Ferrari probably had the best car, even if Mercedes had the slight edge on ultimate pace. For once, Ferrari’s testing speed was no fluke.

Looking back over the last 10 years and seeing how testing form converts into race form is pretty interesting.

What does that mean for this year? Taking the last 10 seasons as a whole, very little. But the trend of recent years shows that teams which are fast in testing tend to at least be up there in the races, too. Ferrari’s record-breaking pace last week probably wasn’t showboating, but that doesn’t mean it’s going to walk away with the championship. It’ll be very surprising if the team isn’t on a roughly equal footing with Mercedes.

Another interesting thing to notice about the last 10 years is that Red Bull doesn’t go after the headline-grabbing times, even when it was winning everything at the start of the decade. Therefore it’s Red Bull that is perhaps the most difficult to read – will it be another year spent picking up the pieces? Or will it come out in Australia with an unexpected turn of speed? The Ferrari badge might not be the only dark horse we see this year… 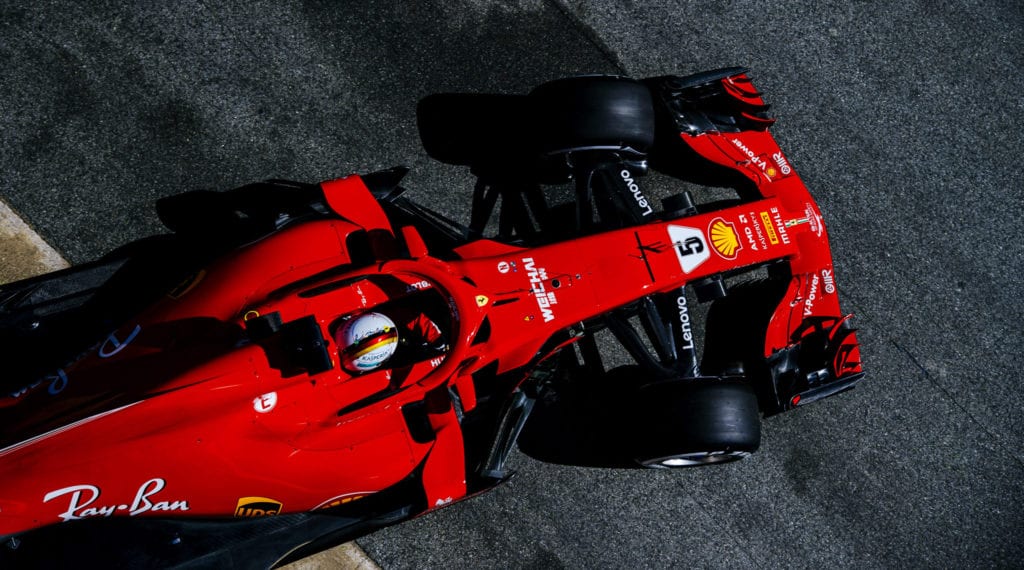