For all the controversy and fanfare over its introduction, by now it’s easy to forget that that Halo even exists. But when Fernando Alonso’s McLaren went bouncing over the top of Charles Leclerc’s Sauber, it was brought sharply back into focus.

The floor and tyres of the McLaren scraped right over the Sauber’s Halo, making for some rather scary-looking shots of the damage.

Did the Halo prevent Leclerc from potentially being seriously injured? There’s no way to know for sure, but you can’t deny that having it there for the car to hit was definitely better than it potentially hitting Leclerc’s hands, arms or head. Alonso was certainly glad for its existence:

“The positive side is that we all three are okay, including Charles. I flew over his car and the Halo was a very good thing to have today. I think for him it helped, looking at the replay. I was definitely happier that I had the Halo. We don’t need to prove that it’s a good thing to have.”

Plenty of drivers and figures from the world of motorsport were also quick to praise its introduction – including Leclerc himself, which is hardly surprising!

End of the race in the 1st corner. Frustrating.
Never been a fan of the halo but I have to say that I was very happy to have it over my head today !
📷: @f1gregoryheirman / @fotoformulak pic.twitter.com/QILqoVtjVh

I’m very happy to see that our joint campaign to introduce the Halo brought such a tremendous result yesterday. Congratulations to all those who supported the initiative and carried out the hard work @Charles_Leclerc @alo_oficial pic.twitter.com/kgqKiR9iPn

We can end the HALO discussion now. It will save lives! #thanksFIA https://t.co/9d7gg3t6iT

Can anyone still complain about the #Halo? Ugly or beautiful it probably saved a driver today…!

And people still think race cars shouldn’t have them.
We could have lost another fantastic talent today without it.#HALO #WellDoneF1 pic.twitter.com/rfX5lWqcKX

It’s not the first time we’ve seen the Halo potentially helping in an accident – during a Formula 2 race in Barcelona earlier in the year, Tadasuke Makino ended up with a few skidmarks on his Halo when the rear wheels of another car went over the top of him. 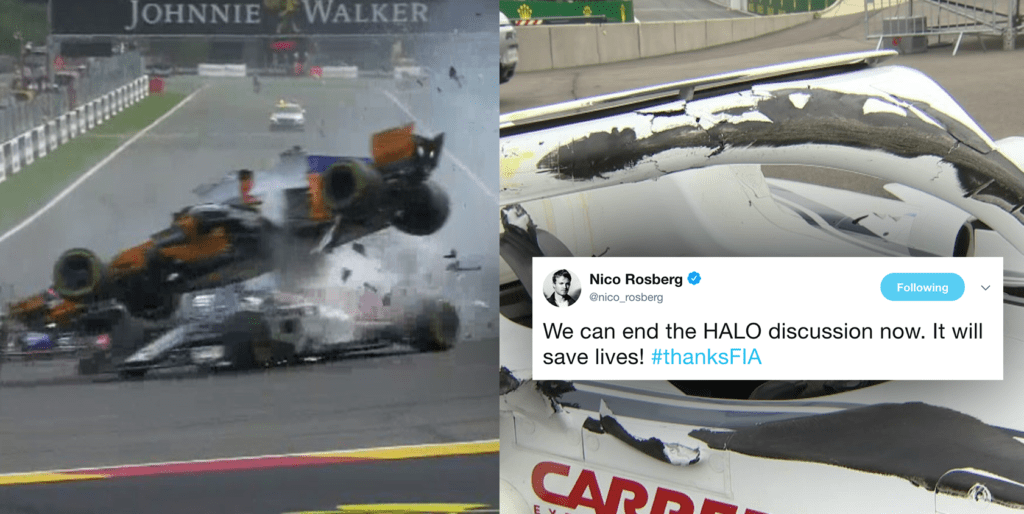