DTM Drivers Go Five Wide Into Turn One At Hockenheim

The DTM has shaken up the rules dramatically for this season. Pit stops take longer, DRS use is reduced and team radio has been banned.

But one of the most exciting rules changes is that after a safety car, drivers have to line up in a two-by-two formation for the restart, as seen in other series’ such as Nascar.

The sport got its first look at the new restart rule during the second race of the opening round of the season at Hockenheim after an incident on the first lap brought out the safety car…and it made for an epic run down to the first corner.

Is that Glock going slowly and dropping from first to fourth? It is! In fact Glock dropping back caused a scary moment where they were five abreast going into the first corner as eventual race winner Jamie Green snatched the lead.

Incredibly they all made it, thanks in part to half the field doing the traditional Hockenheim thing and inventing their own track layout coming out of the first corner. Good luck to them if there’s a safety car at the Norisring later in they year…

Would you like to see double file restarts adopted in other championships or even F1? Let us know in the comments! 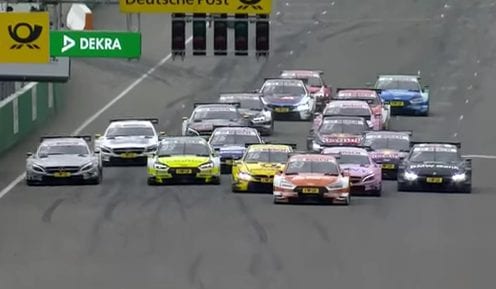