Eddie is known for being a man of many loud things. Cars. Launch parties. Liveries. Statements. Shirts. And his most recent dive into soothsaying certainly fits the bill. Along with many other drivers, Hamilton’s contract is up at the end of 2020 – maybe that could even be defined as the end of the ‘current’ era, as Formula 1 prepares itself for widespread technical and sporting regulation changes. Sebastian Vettel’s Ferrari deal also expires next year, so two and two have been firmly put together here.

Eddie predicted in September 2012 that Hamilton would leave McLaren for Mercedes for the start of 2013, and that proved to be an incredible take a few weeks’ later. He also said that Michael Schumacher would join the Brawn/Mercedes team in 2010. True. That Kimi Raikkonen would return to Ferrari. True. And that McLaren would link back up with Mercedes. True, eventually.

However, the Volkswagen Group didn’t buy Red Bull after all and Mercedes didn’t exit F1 at the end of 2018. Swings and roundabouts.

Last Thursday, Ferrari even admitted to holding talks with Hamilton – further fuelling the flames. The six-time world champion reportedly conversed with president John Elkann at a “social event” thrown by a mutual friend.

Jordan told Top Gear that a move to Ferrari for 2021 would be the perfect time, and could see team boss Wolff follow him; he’s also out of contract after next year and is a close ally of Hamilton. Furthermore, Mercedes might be out of the sport and is yet to confirm its mid-to-long-term future.

“He’s coming to the end of his career, but he still wants to win his seven or more titles. But the real belief that I think Lewis will go to Ferrari in 2021 is that Toto Wolff’s contract expires at the end of next year. He knows Mercedes’ long-term future in Formula 1 is not a certainty. Indeed, Lewis has mentioned Toto’s contract on more than one occasion, which is unusual for an F1 driver to do. Lewis would only go to Ferrari if someone could protect him against any possibility that Charles Leclerc could usurp him. So Ferrari would bring Toto along too.

“What they [Ferrari] don’t have is that person on the pit wall to guide the team, in terms of how they structure the race strategy. Toto knows that. Racing is in his blood, and he’d love to have a name like Ferrari on his CV too.”

Jordan staunchly believes that Ferrari will not let star youngster Leclerc slip through its fingers, despite his deal running out in 12 months’ time, but doesn’t believe that having two ‘number one’ style drivers in the same team is what the Scuderia needs. Hamilton and Leclerc have shown great respect for each other in the press over the course of the last year, with the Monegasque recently saying that he wouldn’t stand in the Brit’s way as he, like everyone on the grid, wants to “fight against the best”.

As for Vettel, Eddie predicts a slim future in F1. If Mercedes does stay in the sport, it could be an avenue for the four-time champion – but it seems that his inconsistent and frustrating spell at Ferrari is coming to a close. A return to Red Bull would also be met by a battle with rampant Max Verstappen – not the nicest of prospects.

“They won’t let go of Leclerc. Vettel will retire at the end of 2020. He can’t go back to Red Bull because he’d get creamed by Max Verstappen. However, if Mercedes did decide to stay on in F1, it might work for Vettel to go there; a consolation prize for losing Lewis. It would be a huge feather in Leclerc’s cap to potentially beat Hamilton in the same car. He has the potential to be a great.”

The question is, will Hamilton’s hypothetical first year at Maranello be spent chasing Schumacher’s record of seven titles, or eclipsing it? Or does the whole thing belong in the ‘No’ pile – let us know what you think. 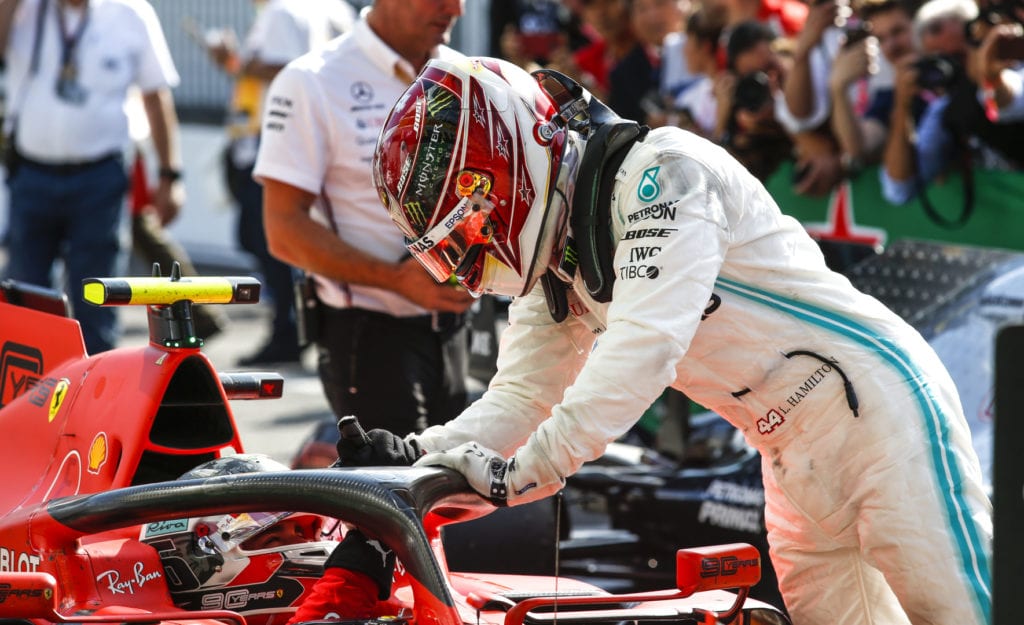