21-year-old Fraga has been racing traditionally for years, being successful in national championships in Brazil and minor single-seater series in North America. Last year he made his first voyage over to the European scene and competed in Formula Regional European Championship and finished third overall, but it’s been his prowess at sim racing which he’s perhaps been best known for. He competed in the first season of F1 esports in 2017, won the Nations Cup in the FIA Gran Turismo Championships in 2018, and took home the McLaren Shadow crown in 2019.

Now he can add a prestigious single-seater title to his list of achievements. Over the past month he’s been racing in the Toyota Racing Series in New Zealand, a series which uses regional F3 cars and is popular with young drivers because of its competitiveness and the fact it takes place during the European series. Previous champions include a couple of names you may have heard of – Lando Norris and Lance Stroll.

He fended off some serious competition, too, beating Liam Lawson and Yuki Tsunoda to the crown – and they’re both Red Bull junior drivers.

It was a season-long battle with local man Lawson, who used his experience to take an early championship lead with three wins from the first six races. Fraga fought in the middle of the season and heading into the final round at Mansfield, he trailed Lawson by eight points. A win and a fourth in the first two races of the weekend – beating Lawson both times – meant that the deficit was just two points heading into the final race. Fraga took pole and spent much of the race with Lawson right behind him and despite three safety car periods, Fraga kept his cool, won the race, and clinched the championship.

Chances are you’ll be seeing a lot more of Fraga this year. He’s stepping up to the more powerful cars of FIA F3 – yep, that’s the F1-supporting series – racing for the Charouz team, with none other than David Schumacher (son of Ralf) as a teammate. This is the same level that another Gran Turismo sim racer, Jann Mardenborough, raced in 2014 and 2015, picking up a race win. Can Fraga match or even surpass that achievement? Either way, it’s yet more evidence that sim racing can be used as a platform to help kickstart a career in motorsport. 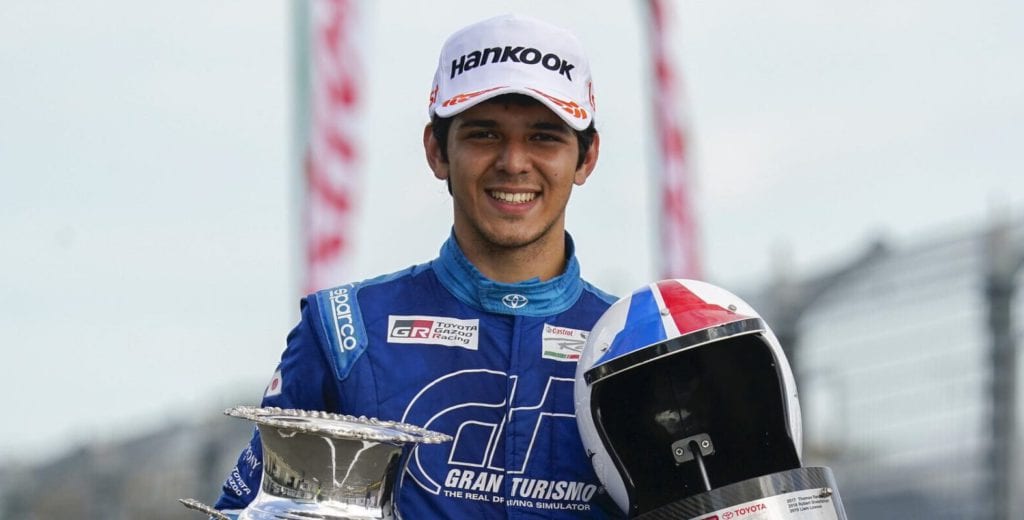