It seems slightly ridiculous when you think that Abu Dhabi has been on the F1 calendar for 10 years, now. This year’s race will be the 11th to take place at Yas Marina, the same number that took place in Adelaide.

A spectacular setting with the sunset start time proving to be a reasonable metaphor for the end of another F1 season, the layout of long straights and a tough, twisty slow section should give it all the ingredients needed to provide incredible racing. That hasn’t always been the case, but there have been a fair amount of significant moments in Abu Dhabi down the years. Which race has been the best? That’s up to you to decide – keep scrolling for our thoughts on how we’d rank all 10 so far.

After a dominant season and 11 wins, Sebastian Vettel retiring with a puncture on the first lap should have injected some excitement into the race. As it was, it just led to Lewis Hamilton winning easily for McLaren ahead of Fernando Alonso and Jenson Button. It was the only race of the season where Red Bull failed to finish on the podium. If you can remember any interesting moments from this race, then your memory is far better than mine!

Valtteri Bottas had the measure of Hamilton as he won his first race since Austria, suggesting that maybe he’d be able to take it to his teammate the year after… which didn’t exactly happen.

The most intriguing part of the race was probably Daniel Ricciardo’s battle with Vettel for the last podium spot, but that ended early when he retired with hydraulic failure. Come the end of the race, that meant that (Ricciardo aside) the top eight cars finished in the exact same order they’d qualified in, which gives you some idea of just how little went on. Felipe Massa scraped the final point in his last race (for real, this time) and joined the Mercedes boys on the pit straight for some donuts.

F1 also revealed a new logo on the podium, sending fans into an uproar for some reason. When that’s the most memorable part of a grand prix weekend, you know it probably wasn’t the best race.

In terms of the actual race, 2013 wasn’t much to scream and shout about. Sebastian Vettel dominated to beat teammate Mark Webber by more than 30 seconds, with Nico Rosberg third for Mercedes. It wasn’t exactly exciting, but it did mark Vettel’s seventh win in a row. It meant he equalled the record for most consecutive wins and, as he went onto achieve nine in a row, it at least makes the race have a degree of significance (as does the fact that it was Webber’s final pole position) – plus, when rare records like that are being set, sometimes you just have to step back and enjoy the moment.

Hamilton utterly blitzed Rosberg to the championship in 2015. With the pressure off, Rosberg stepped it up at the end of the year and Abu Dhabi marked the third of what would be a seven-race win streak in what was at least a reasonably close battle between the two. Rosberg led from pole and built up a lead, but halfway through the race Hamilton began to reel him in. At the final stops, Hamilton attempted to make a difference by running several laps longer, though it just allowed Rosberg to build up enough of a gap with the undercut to be safe until the end of the race.

In that regard, it is slightly better than the three races mentioned so far. It also earns bonus points for bringing an end to the 2015 season, which was largely awful.

It could have been epic: Rosberg vs Hamilton for the championship, Rosberg on pole and needing to win with Hamilton third or lower to take the title.

Unfortunately, what could have been an exciting end to the first season of F1’s hybrid era fizzled out. Hamilton took the lead at the start and looked comfortable but any hopes of Rosberg at least fighting for the win ended when he had an ERS failure just before half-distance. Hamilton’s second championship became certain, while Rosberg impressively opted to finish the race in a distant 14th rather than by retiring.

The race wasn’t over, though – as Hamilton nursed his car to the finish, Massa got a sniff of a result for Williams and closed him down, eventually finishing just 2.5 seconds behind. Ricciardo also cemented his drubbing of Vettel at Red Bull – both started from the pit lane, Ricciardo made his way up to fourth at the end – four places and 35 seconds ahead of his four-time champion teammate.

As title deciders go, it could have been better, but it was a significant race: it was the start of a new era, Hamilton’s team switch had been vindicated and it kickstarted a period of dominance for Mercedes – one that we had no idea would still be going on five years later…

Up at the front, 2018 was fairly standard stuff – Hamilton won from Vettel in a race which might have been more interesting if tyre wear was any sort of factor – Hamilton’s only stop came on lap seven, yet he easily made it to the finish.

There was a bit of interest further down, though. Nico Hulkenberg was left “hanging like a cow” after being clipped into a roll by Romain Grosjean, and Fernando Alonso went full ‘zero f**ks given’ in his final race. After telling his engineer that he doesn’t care about scoring another point because “I have 1800 points already”, he employed a unique tactic to try and catch Kevin Magnussen for second – he just started cutting corners. Alonso stayed 11th after being given some penalties, but there was a lovely moment when Vettel and Hamilton joined him to give him a sort of guard of honour on the cool-down lap. The three of them drove to the pit straight where a combined total of 11 world championships did donuts together – an unforgettable sight.

Why so high? Well, 2009 was the first year of Abu Dhabi and as such, it had that whole ‘new race’ vibe going on. Also, both championships were done and dusted, so there was a sense that the gloves were off and everyone could just race without the burden of wider championship implications.

Up at the front Vettel and Hamilton fought for the lead until Hamilton retired with brake problems. Vettel won comfortably as second-placed Mark Webber had to fight off a late challenge from Jenson Button, who put Brawn GP on the podium in its last race.

Further down the order, Jaime Alguersuari amusingly tried to retire his broken Toro Rosso in the Red Bull pit box, while Kamui Kobayashi continued to impress in his second race for Toyota. Starting 12th, he ran a one-stop strategy, pulled off an incredibly overtake on Button at one point and eventually finished sixth, ahead of teammate Jarno Trulli. As first races go, Abu Dhabi’s was solid.

Only third for one of the most memorable title deciders in recent times? Errrm, yes. With Vettel, Webber, Alonso, and Hamilton all in with a shout of the championship, how could it not be a good race?

Unfortunately, a bit like 2014, it ended up being one of those races where the tension ebbed away as the race progressed. With Webber or Alonso the most likely champions, they focused on racing each other to the point where Ferrari reacted to Webber’s first stop. This left them in traffic and unable to pass cars that had already pitted – namely the Renault of Vitaly Petrov. The longer the race went on, the less likely it looked that Alonso or Webber would be unable to make up the positions needed to be champions. Vettel won the race and his first title to become F1’s youngest champion, the unexpected result causing him to break down in tears on the team radio. A superb finale, yes, but not quite as good as two other Abu Dhabi GPs…

Probably the only truly crazy Abu Dhabi GP we’ve had, it also proved to be a critical round of the championship. Vettel was thrown out of qualifying for a fuel infringement and had to start from the pit lane, yet at the end he made it up to third, one place behind Alonso – almost the very definition of damage limitation.

He was helped by all sorts of carnage going on ahead of him. In Abu Dhabi’s history, the full safety car has only made four appearances – and two of them were in this race. The first was when Narain Karthikeyan’s HRT started to slow with issues and an unsighted Nico Rosberg launched off the back of him. The second came when the midfield battle (which had been utterly manic throughout) came to a head as Paul di Resta forced Sergio Perez off the circuit, who in turn caused Mark Webber and Romain Grosjean to crash into each other as he rejoined, spreading debris everywhere.

Up at the front, Lewis Hamilton had led from pole until his McLaren did its usual 2012 trick of breaking down, handing Kimi Raikkonen the lead. The Finn went on to win his first race since the 2008 French GP, uttering the famous “Leave me alone I know what to do’ team radio message on the way to becoming the eighth winner of the season, as well as having to fend off a charging Alonso behind him.

Wanna know what’s even crazier? Pastor Maldonado qualified third and finished fifth, his best result other than his victory. He might even have been able to fight for a podium too, had his KERS not failed early in the race.

In terms of action, 2012 Abu Dhabi has it covered. But when it comes to sheer drama, one race has it beaten.

It was Hamilton vs Rosberg for the championship, with the roles kinda reversed from their 2014 showdown – if Hamilton won, Rosberg needed to be fourth or lower. Early on it became clear that although Hamilton had the winning part covered, Rosberg was probably going to finish second – especially after he’d pulled off a sensational pass on Max Verstappen after his stop.

With that in mind, Hamilton came up with a plan – he’d try to back Rosberg into the chasing pack to get them to pass him. Driving very slowly through the twisty bits, he then upped the pace before the DRS zones so that 1) he wouldn’t come under threat from Rosberg, and 2) to try and deny Rosberg DRS, making it easier for others to pass him.

For lap after lap this went on, with Mercedes – only concerned with winning the race – demanding that Hamilton up his pace in case the charging Vettel got past the pair of them.

Hamilton was more than up to his own challenge though and ignored his team as he flawlessly executed his go-slow strategy (which caused Nigel Mansell to have a meltdown on Twitter), making Rosberg’s life difficult without ever really compromising his chance at winning. The problem for Hamilton was that Rosberg was also dealing brilliantly with the situation and despite the threat from Vettel in the closing laps, he held on to take second an win the title.

It was a title decider that had everything: great racecraft from the eventual champion, a rival defying his own team and being creative to try and turn things in his favour, and tension and drama from start to finish.

For Rosberg, it was also his last race – a few days after finally winning the championship, he announced his retirement. It was also the last time Hamilton was beaten which, as we prepare to enter the next decade, is a scary thought. 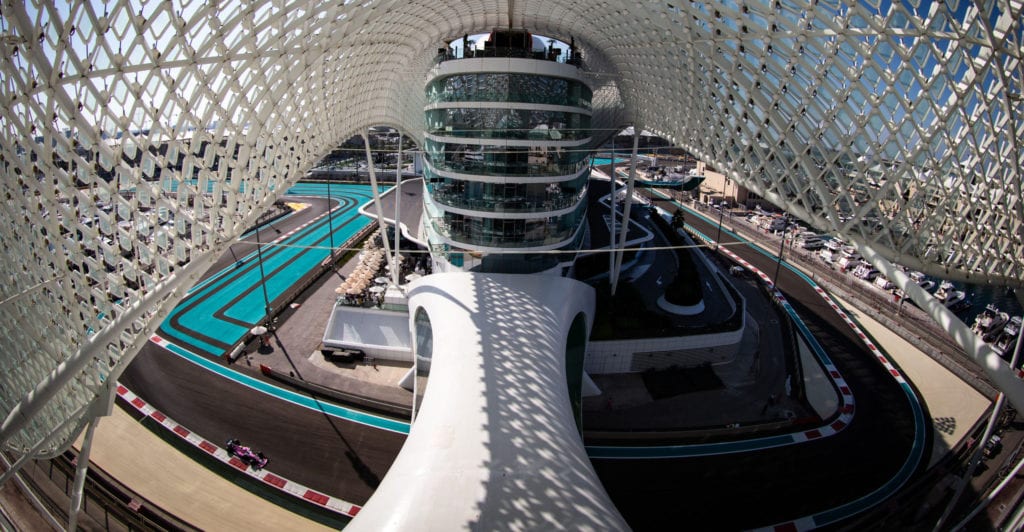