Every Engine Era Of Formula 1, Ranked By Sound – WTF1
Skip to content
×
Formula 1

Every Engine Era Of Formula 1, Ranked By Sound

The sounds of cars in motorsport has been a major part of F1 since… well, forever. It’s been a hot topic of late, too, with the noise F1’s hybrid power units repeatedly coming under fire and the advent of electric cars threatening to drastically change the way we think about the sounds of racing forever. When did F1 sound the best? We’ll get onto that, but firstly, a couple of disclaimers.

First up, this isn’t quite a definitive list. Engine rules have changed far more often over the near-70-year history of F1, but if I broke it down into every single category and type of engine, you’d still be reading this when F1 turns electric. Instead, I’ve broken things down into broad eras and engine types and given examples of the types of engine used.

Secondly, this is just an opinion post. Chance are you’ll disagree with some of my choices – that doesn’t make me wrong, and it doesn’t make you wrong. Hopefully, you’ll at least be able to see where I’m coming from, though!

Is it controversial to put this last? Perhaps, but for my money, the only thing the V8s had going for them was volume – the actual sound itself is quite flat.

It wasn’t too bad when teams were allowed to rev them beyond 20,000RPM in 2006, but as lower and lower rev limits were gradually introduced (all the way down to 18,000RPM by 2009), any plus points they had were gone. Admittedly, when blown diffusers were a thing and they cracked and fizzled on the overrun it was quite cool, but again, that was a short-lived period, and it’s not like that sort of noise was missing from other, better-sounding engines.

I like a lot about the hybrid engines – sorry, power units. The fact that in race trim they’re among the most powerful powerplants in F1 history, but manage to do so while using a fraction of the fuel as in the past and that (some) teams only need to use three per season, not three per weekend, is a remarkable feat of engineering.

The sound, though…? Yeah, it’s not great. It’s purely a volume thing, though, because the actual noises are quite interesting. TV doesn’t do them justice but in real life, you can really hear the sounds of the turbos, the pops and bangs on the overrun, and the differences between the individual manufacturers. (The Honda sounds the best, btw, especially in the early days).

One benefit of the quieter power units is that on TV you can now hear a bit of tyre squeal and also the noise of the cheering crowd, which helps add a little bit of atmosphere at home. But the comparative silence just doesn’t have the same gut-punching hit that many feel should be a part of F1.

95 per cent of the time I don’t miss it, but every now and then, you hear an engine sound which reminds you of the theatrics of years gone by and, for all the impressive things about modern power units, definitely make you wish for the noise of days gone by.

This is where things got a bit difficult. I knew what my bottom two and top two in the list were going to be, but the middle? There are so many things to love about each era that separating them is hard.

Also, by ‘The early years’ I mean from 1950 to 1960. That encompasses quite a few different regulations and there were many different engines during this time. The Alfa Romeo 159 above used a 1.5-litre supercharged straight-eight, the Maserati 250F used a 2.5-litre straight-six and then, later, a V12, while the Cooper T51 used a 2.5-litre four-cylinder engine. The variety alone is what makes it such an intriguing era.

They all sound pretty good, but with footage of the era being quite a bit rarer than that of any other, it’s harder to form any sort of emotional connection to the noise. Plus, they sound very similar to a lot of other racing cars of the time and when you hear them running at historic events and the like, they don’t really scream ‘Formula 1’.

Renault was seen as a bit of a joke when it introduced the first turbo engines into F1 in 1977 but as the 1980s wore on, teams needed a turbo to properly compete.

Again, variety is partly what makes it such a compelling era, with manufacturers using four, six, and eight-cylinder engine layouts for the 1.5-litre regulations (for my money, Alfa Romeo’s V8 had the best tone).

Unlike today’s turbo-hybrids, in the 1980s there was a certain brutality about the noise with all the pops and crackles – appropriate, given the 1000bhp+ figures that some engines pumped out with the boost turned up. For all of that lovely sound though, realistically, the best sounding engines have got to be naturally aspirated – and if there’s one thing manufacturers of F1 engines know (knew?) how to do, it’s churn out a mega N/A engine.

In 1961, there was a fear that F1 cars were getting a bit fast, so the regulations were changed to force all teams to use tiny 1.5-litre engines. They were widely unpopular as many manufacturers struggled to get more than about 230bhp out of their high-revving, low-torque motor.

But the sounds… oh, the sounds. The engines may have been small but that didn’t just mean four and six-cylinder jobbies – oh no. Ferrari used a V8 and then a flat-12, while Honda used its experience of building motorbike engines to produce this utterly magnificent V12 motor – which, to be honest, is the sole reason this era is up so high in the list. Just listen to it!

Oh yes, it’s the V10s – but if you’re wondering why they’re ‘only’ third, there is a reason for that which will become evident soon.

V10 F1 cars were loud. However, unlike the V8s that succeeded them, they also had an utterly glorious tone, which had a knack of causing your entire body to tingle, only for you to then be punched in the stomach by the violence of the downshifts. The only negative was the gravelly sound under power caused by the traction control systems, but we really are splitting hairs here.

The 3.0-litre V10s were a proper experience and it’s no wonder so many people miss them.

In 1966, F1 switched to a 3.0-litre engine formula. There were a few experiments with different engines to begin with, but once the lightweight, powerful, reliable and cheap Cosworth DFV was introduced in 1967, it quite literally changed the sport. Suddenly, anyone could build a chassis, plonk a DFV in the back, and theoretically be somewhat competitive.

At times during the 1970s, almost the entire grid was running DFVs – which, from a sound perspective, is no bad thing. There were a few hold-outs – Ferrari, of course, continued to tread its own path with its flat-12s, which stood out among the DFVs with their own unique bark.

Alfa Romeo also had a flat-12, while BRM and Matra used V12s, and then Renault added a new sound with its turbo V6 in 1977. So even though the DFV ended up powering most of the cars, there were enough teams and manufacturers doing different things to prove some variety and keep the aural experience interesting. Great sounds, a few different engine layouts, the rules stayed the same for ages – what’s not to like!?

Why weren’t the V10s number one? Well, they are – but so are the V8s and V12s (and even a flat-12 and a W12) that made up the post-turbo era and ticked every box you could possibly want. Great Noise? Check. Variety? Check. Loud? Double-check.

As well as your V10s, you had the V8s from manufacturers like Ford and Judd which powered many of the smaller teams.

But – and I’m sure you know where this is going – the absolute pinnacle of engine sounds has to be Ferrari’s V12 – the last of its kind to be seen in F1. Crank up the volume and enjoy.

For a stretch in the 1990s, we got to enjoy all of them together, the last true era of teams and manufacturers being able to trial different concepts. For 1995, the engine size was reduced from 3.5 to 3.0-litres, which saw Ferrari ditch its V12 and go down the V10 route for 1996. At the end of the following year, Minardi and Tyrrell ditched the V8, leading to a grid entirely comprised of V10s and taking F1 into the more homogenised era we’re in today (Toro Rosso ran a detuned V10 in the first year of the 2.4-litre V8s in 2006, but that was very much an anomaly.

That what made the sound coming out of F1 races in the early-1990s so good. That and the fact it’s when I grew up with F1 – and at the end of the day, that’s always going to be everyone’s favourite period, isn’t it? 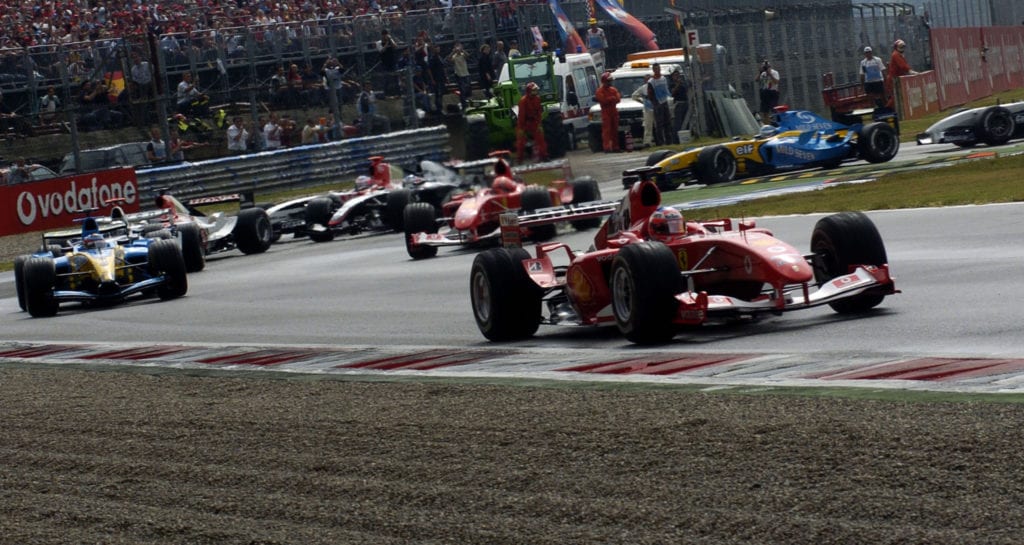