The driver ratings will be a part of F1 2020’s ‘My Team’ mode, which allows you to create and manage your own team, as well as hire drivers.

To make that process a little bit more involved, there are going to be driver rating cards for all of the F1 and F2 drivers featured in the game. Each driver is ranked from 1-100 in one of four categories which will affect the way your team operates: Experience, which is key in generating resource points to help you develop a car; Racecraft, which is a measure of how well a driver can overtake; Awareness, which relates to how likely a driver is to make mistakes; and Pace, which indicates the speed of the driver. There’s also an overall rating.

Now, trying to apply Top Trumps-style ratings to F1 drivers is always going to be a contentious business, and from the six driver rating cards revealed so far, that’s appears to be no different here.

Why is Alex Albon’s Experience rating only one lower than Pierre Gasly, when Gasly has an entire extra season and a half under his belt? Why is Gasly’s Pace number five points lower than Daniil Kvyat’s when he outraced and outqualified the Russian at Toro Rosso last year? Why is Gasly’s pace rating lower than Lance Stroll’s?

Speaking of Stroll, race awareness has always been a strength of his – he’s frequently superb in the chaos of the first lap – and yet he’s rated lower in this category than Kvyat, a driver who has the nickname ‘Torpedo’ and often finds himself getting involved in bumps and scrapes.

I suppose in the grand scheme of things, it doesn’t really matter – we’re over-analysing numbers that will likely make more sense in the context of the game (and hopefully, all of the other drivers). And hey, at least it’s not as bad as when McLaren ranked Niki Lauda’s bravery stat as 67 out of 100.

Update: More of them have been revealed which raises even more questions.

Daniel Ricciardo, possibly the best overtaker on the grid and a driver renowned for his wheel-to-wheel ability, has the same Race craft rating as Esteban Ocon, a driver who’s been involved in quite a few incidents.

And Bottas’s score of 99 for Awareness seems a bit high – especially as it’s even higher than Hamilton’s. Hmmm… 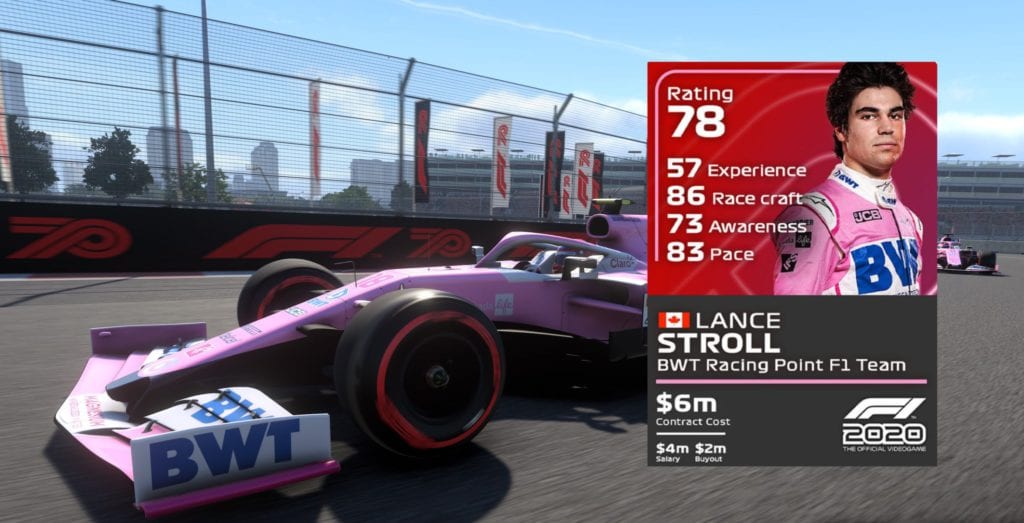