Trick or Treat, it’s race week! As F1 prepares to return to the Autodromo Hermanos Rodriguez for the Mexico City Grand Prix this weekend, fans around the world were showing off their creative side with some fab-boo-lous Halloween celebrations.

So, fasten your sheet belts as we take a look at some of our favourite F1-themed Halloween activities.

BOSSING IT WITH THEIR HALLOWEEN OUTFITS

Lots of future F1 stars dressed up as fan-favourites from across the grid and speaking of Red Bull, Max Verstappen better watch out. Over in the USA, 3-year-old Marlow Thompson went trick or treating as the Dutchman in a mini race suit. It even included his own replica helmet and to be honest, we’re rather jealous.

Meanwhile, Shauna Martin and her partner Nathaniel Northern went all out with their Sebastian Vettel inspired costume. Recreating the AMR21 with velcro Pirelli tyres, the pair managed to clock in a quick pit stop before heading to a party. Accompanied by a bee costume in recognition of Vettel’s environmental work, they even caught the attention of Aston Martin themselves.

Our four-legged friends didn’t miss out on the opportunity to get dressed up either. Sophie Day’s dog Bobby stole our hearts as George “the Jack” Russell. I wonder if Toto Wooff approves.

Here’s a jack Russell dressed up like George Russell 🐶 pic.twitter.com/peZDSLetg6

Even Kimi Raikkonen got in on the Halloween action. The 2007 world champion was spotted on his Instagram account dressed as the 101 Dalmatians with his two children Robin and Rianna, alongside his wife Minttu as Cruella de Vil. We think they looked absolutely paw-fect as the Raikkonen family turned their house into a spectacular Halloween haunt. Keen-eyed fans might have seen a skeleton at the wheel of his Alfa Romeo car.

Pumpkin carving can be a challenging task at the best of times, but Sari went above and beyond to celebrate Halloween. Channelling their inner Lando Norris, Sari recreated his iconic pole position award from Sochi. We can’t even imagine how long that took, yet the effort was most certainly worth it.

They weren’t the only fan to celebrate McLaren this Halloween, as over in Atlanta, Sarah Silva brought their much-loved Gulf livery to life on a pumpkin. By the way, can we have that livery back please?

The finished project: a gulf livery pumpkin ☺️🧡 I am by no means an artist, but I had fun with this one! @McLarenF1 @GulfOilIntl #pumpkincarving #gulflivery pic.twitter.com/1gd2DPmtp5

Did you get in on the F1-themed Halloween celebrations? Let us know in the comments below. 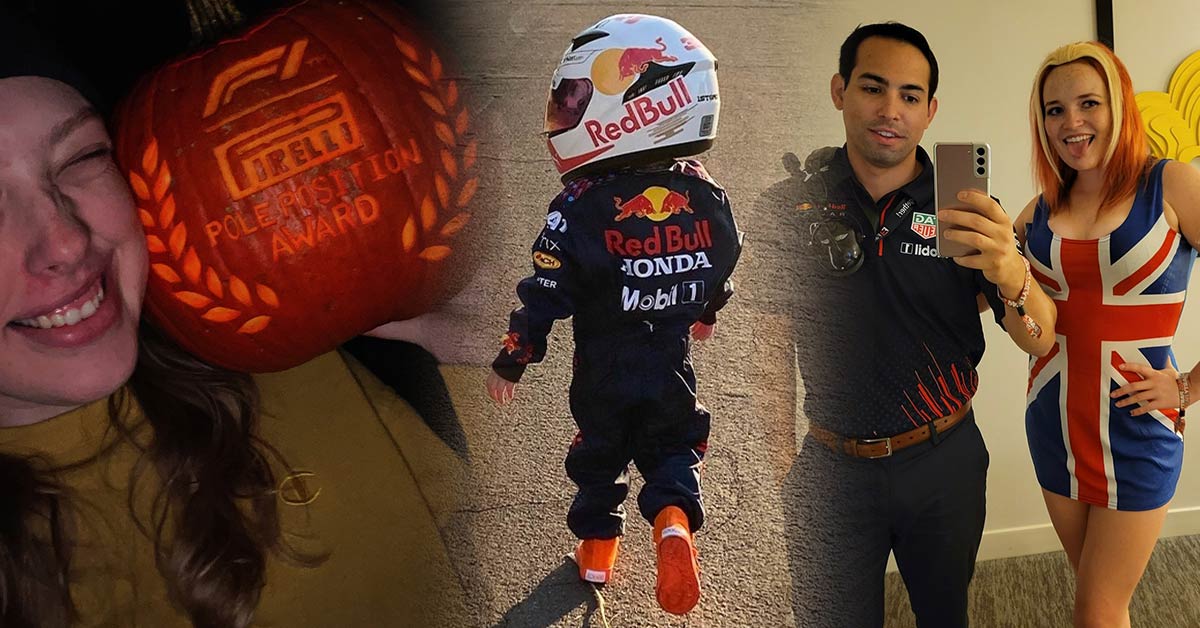