Posted on November 29, 2020 | by Katy Fairman
Posted on November 29, 2020 | by Katy Fairman
Trigger Warning: this article contains media relating to a serious accident that included a significant fireball.
During the first lap of the Bahrain Grand Prix, Romain Grosjean suffered a mammoth crash that he was fortunate enough to walk away from. With thanks to the halo and the incredibly quick reaction from Romain, the FIA and the nearby marshals, he was able to remove himself from the car – that was in two parts  – to safety.

The incident caused a lengthy red-flag period whilst the barrier was replaced and the remains of Grosjean’s car were recovered. During that time, some drivers took to social media to show their thanks and sheer relief that Grosjean escaped the worst crash we have seen from the sport in years.

I'm so grateful Romain is safe. Wow… the risk we take is no joke, for those of you out there that forget that we put our life on the line for this sport and for what we love to do. Thankful to the FIA for the massive strides we've taken for Romain to walk away from that safely https://t.co/dG8AXmsbKN

Massive relief to see Romain is ok. Huge credit to all the teams, the FIA and F1 for all the safety measures we have in the sport today 🙏

So relieved that @RGrosjean is safe. Thanks to Dr Ian Roberts and the @FIA teams for their courageous and efficient intervention. We have always put safety at the top of our priorities and will continue to do so.#F1 #BahrainGP 🇧🇭 pic.twitter.com/64xubWCgUH

Teams also got involved sending their thoughts to Haas and Grosjean.

We can only echo these sentiments. We hope Romain makes a speedy recovery and thoughts with everyone in the team after such a scary accident 🙏

Huge relief to hear that Romain is ok. Huge hugs to the entire team.

We are so thankful Romain is okay following today’s crash. This is a moment to recognise the strides the @fia have made to always make our sport safer and to salute the unstinting bravery of the marshals and medical crew.#BahrainGP

A big thank you to the @fia and @F1 for constantly striving to make our sport as safe as possible, and to the @BAH_Int_Circuit safety team for their quick reactions.

We’re so glad to see @RGrosjean walk away from that. 🧡

🚩 Red flag 🚩 We're back in the pits after a big crash. There's a round of applause in the pit lane for GRO who we're pleased to see is out of the car 👏 #BahrainGP 🇧🇭 pic.twitter.com/fzm6or72DY

The only tweet that matters right now ⬇️ https://t.co/9Wl1shAzzP

After the impact, the FIA Medical Car was immediately able to attend the crash scene. Medical Car driver Alan van der Merwe helped guide Grosjean from the wreckage and has been called a hero for running into the flames to help.

Haas Team Boss Guenther Steiner was quick to find him and thank him during the red-flag period.

Thank you to Medical Car driver Alan van der Merwe, the circuit medical team and marshals for their quick thinking and actions in getting to Romain so soon after the accident 🙏 pic.twitter.com/hkUChcweeq

Away from F1, ex-drivers were also quick to show their support to Romain and praising the halo that undoubtably saved his life.

I have never seen an accident that bad in my lifetime and for him to jump out is an outstanding achievement for all those continuing to push the safety forwards. 5 years ago that would have been a different story.

Wow, glad to see @RGrosjean is doing ok after this huge crash! 😱🙏🏼 Never seen anything like this! We’ve got to be grateful what a job the @fia is doing to make this sport as safe as possible 👍 https://t.co/AKa1no0bmD

Don’t forget how tough this is for the other boys. To see it, your heart stops for a second and then you have to go again. To say it’s difficult is an understatement.

Remember all the negativity about the halo. I was cynical about it too. But if you see where safety in F1 got us today: amazing.

Grosjean was air-lifted to hospital with minor burns, and is understood to have suffered fractured ribs but this is not confirmed at the time of publishing.

“The driver was immediately attended to by emergency and medical crews,” an FIA statement confirmed. “The driver self-extricated, and was conscious at all times. He was taken to the medical centre before being transferred to Bahrain Defence Force (BDF) Hospital by helicopter where he is undergoing further evaluation.”

Haas confirms that Romain has minor burns to his hands and ankles, and that he is being taken to hospital with suspected but unconfirmed broken ribs.

Grosjean was also voted ‘Driver of the Day’ which was a lovely touch from fans around the world.

We are all so relieved to see Grosjean walk away from this crash and wish him a speedy recovery. 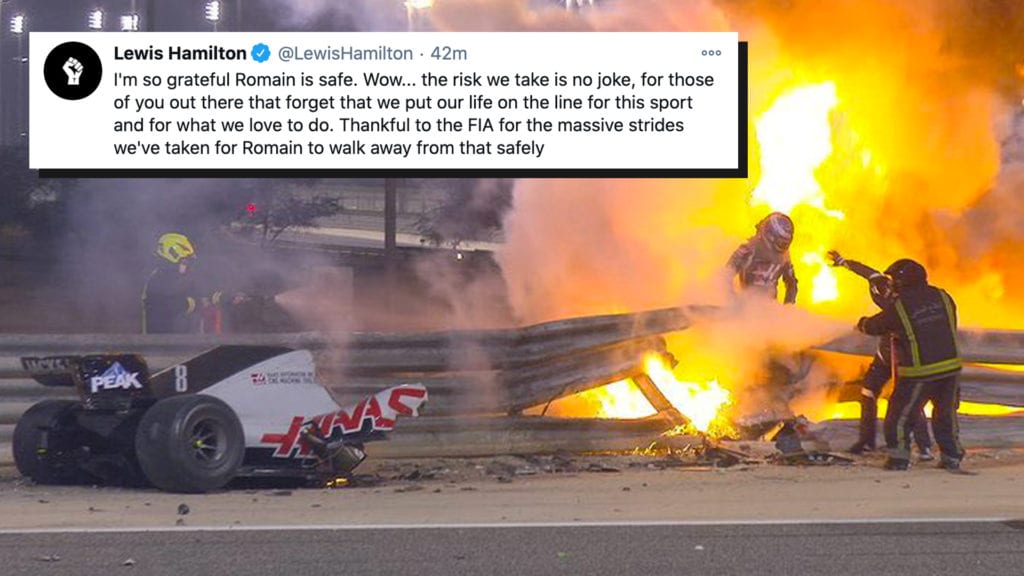