F1 Should Do Gimmicks Properly Or Not Bother At All – WTF1
Skip to content
×
Formula 1 , Opinion , WTF1 Column
5 comments

F1 Should Do Gimmicks Properly Or Not Bother At All

In a new weekly opinion column on WTF1.com, the team and special guests share their honest thoughts on certain aspects of motorsport. The first of these columns is from WTF1 Founder Tom Bellingham about F1’s suggestion of introducing Sprint Races.

Change; the one thing F1 fans fear most. Whether it’s introducing a new safety feature, a change to hybrid engines or even a new qualifying system, if F1 discusses change, you’ll be sure as hell every F1 fan on social media is going to have a strong opinion about it.

You can’t really blame us. Deep down, it’s just our love for the sport, and we want what’s best for it.

When something changes in F1 it usually starts with a lot of social media outrage, the idea is then pegged back a bit and then it’s eventually introduced to a fair bit of complaining until we just get used to it and it becomes normal.

The words always thrown around are ‘tradition’ and ‘DNA’ but what is traditional F1? Is it how F1 was in the 1950s or just how you remember it in your childhood? Unlike other sports, F1 changes like no other, it’s always evolving. If it hadn’t, we’d still be racing around hay bales on airfields in aluminium tubs.

I may not have been alive to watch F1 in the 50s (I’m not that old despite the jokes) but 2021 will be my 25th season watching this sport, and in those years it’s changed A LOT.

The sport is now full of these supposed ‘gimmicks.’

In the 25 years I’ve been watching F1, qualifying has changed a lot too. It used to be an hour session where you could set your lap times, then came one-lap qualifying and in 2006 they introduced the three-part knockout system we have today.

I’m sure many people reading this will probably think the current qualifying system we have is pretty good, right? But you just know that if social media was around when it was introduced, there’d be an online outrage about how ‘F1 are messing with qualifying’ and that ‘knockout qualifying sounds like something NASCAR would do as a gimmick to make things more exciting’.

For me, the current knockout qualifying format is what F1 does a lot with their ‘gimmicks’, and that’s playing it too safe and not just embracing the fact that they want to make it more entertaining and unpredictable. Sure, it does mix up the order for one race every few seasons, but the fastest car still ends up on pole for the most part.

No doubt some of you are now thinking ‘Well the fastest car should end up on pole’ and that’s fair enough, but if F1 are going to mess with things so much and essentially get the same result, why bother?

This is precisely what seems to have happened with the rumoured format for trying a Sprint Race at a few rounds this year. It’s a gimmick in the sense that you’re changing the “traditional” format of a Grand Prix weekend, but essentially there’s no real reason it’s going to be any more entertaining with it.

If you haven’t read yet, F1 President and CEO Stefano Domenicali has said ‘reverse grid’ talk is over, but they still want to introduce this Saturday Sprint Race.

So, let’s get this straight. You have a shorter race with no reverse grid element – which will likely see Mercedes qualify on pole – and then win a shorter distance race on Saturday, only to do exactly the same the day after but in a longer race? What’s the point!?

Let’s make one thing clear; I actually like the idea of a Sprint Race. The more we get to see F1 cars racing and not just lapping each other is for the better in my opinion, but the lack of reverse grid or variety to this race just makes the whole thing pointless for me.

All this idea seems to do is make the main event less special. It doesn’t offer any kind of mixed-up order or unpredictability and gives the fans reason to complain about its gimmicky nature.

Oh, and not to mention that it just gives the top teams even more of an advantage as they’ll score even more points during a race weekend!

I for one am disappointed the reverse grid proposal has now seemingly been scrapped. We could get to see a thrilling short race where the top teams have to fight to the front, with a traditional full-length Grand Prix the following day to enjoy. We know reverse grids work, we saw it in Monza last year!

Both this reverse grid proposal and the Saturday Sprint Race idea received mixed reviews from fans. Both will get their fair share of criticism for being a gimmick, so why not introduce the one that actually sounds entertaining?

Fans get used to change eventually, whether it’s the Halo, a new logo, the hybrid engines or a new qualifying format. So F1, if you’re going to keep adding these gimmicks, stop bottling it and just go for it.

Do you agree with Tommy? Let us know in the comments below. 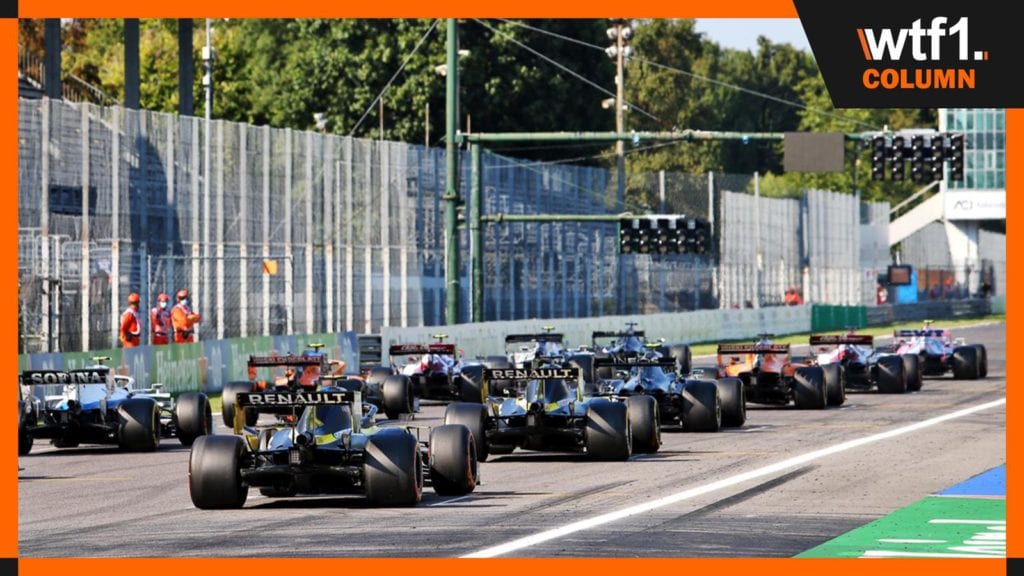