During the Japanese GP, we got our first in-race look at the graphic. My initial thoughts barely stretched beyond ‘huh, look, a new graphic’ and I quickly forgot about it. But later in the race, when it came up again, my opinion quickly shifted from mild indifference to simmering annoyance. That’s because it apparently told the story that Lewis Hamilton, out of the pits and chasing down Sebastian Vettel on tyres 11 laps newer, not only had less tyre performance than the Ferrari, but even had one of his tyres at zero per cent.

Now I dunno about you, but to me, zero per cent tyre performance kind of implies that there’s something seriously catastrophically wrong with the rubber, but clearly that wasn’t the case.

It didn’t take me long to forget about it because let’s be honest, it’s a single graphic which presumably had some kind of error. We see on-screen errors on other graphics every now and then and as a new system, perhaps it would be worth giving it the benefit of the doubt.

However, fast-forward a couple of weeks to Mexico and it seems that the graphic had rubbed other people up the wrong way. Pirelli (who, contrary to popular belief, know a thing or two about tyres) was quoted as saying that they had nothing to do with the graphic and that due to factors such as track temperature or whether a driver is in traffic, the data shown on screen is “not accurate” and “misleading”.

That seemed to lead F1 to double down on the graphic on Saturday evening, saying in a statement:

“The percentage value indicates how much of the tyre performance capability has been used thus far in a stint. This value is not to be confused with tyre wear which instead refers to the amount of actual rubber removed from the tyre during the usage period. Lower values indicate a proportional loss in tyre performance via tyre degradation.”

That’s all well and good, but it still doesn’t really offer any genuine insight. Firstly, a percentage of what? A tyre with 50 per cent performance clearly isn’t going 50 per cent slower, so it has to be relative to something – expected peak performance, perhaps. But as Pirelli says, there are so many variables that it must be almost impossible to know what that performance is. Even the teams, with their own simulations and expectations based on their own closely-guarded expertise, can be surprised by tyre performance race to race. If their predictions aren’t always entirely accurate, how much worse are those being used for the graphics?

According to F1, the benefit of the system is to show fans how different cars work their tyres relative to each other:

“This includes the relative tyre performance difference between two cars locked in a battle and the implication of one car having to stop sooner than another, thus effecting race strategy outcome. An emerging picture over the season of which cars are lighter on tyres than others, will allow the fans to become more immersed in not only the general conversation but also how particular battles could play out.”

Will it, though? Who’s to say that a Mercedes with 50 per cent remaining isn’t going to have more life left in its tyres than a Ferrari with 70 per cent left? And that’s before you even get into the complications of different compounds. It’s not a linear scale, and it’s not even the case that performance will degrade over time – a graining of blistering phase may come and go, leading to a brief drop in performance before a slight improvement.

These are all hypothetical accuracy issues, but even in Mexico, there was a glaring one which just leads me to question the point of the whole thing even further. 20 laps into the race, the graphic came up to show the state of Vettel’s tyres, which it claimed were 20 laps old. Except his tyres weren’t 20 laps old, because they’d done three laps in qualifying as well. Was that a simple error in the graphic, or a conscious decision to prevent potential confusion as to how he’d done 23 laps on tyres in a 20 lap race. Does the model for the data take those qualifying laps into account, or is it only from the start of the race?

Now, don’t get me wrong, I’m all for things which can make the sport more accessible and, as tyres are frequently such a big talking point during races, I’m not criticising the introduction of something which tries to explain it in better detail.

However, there’s already a better way to display the information without being quite so misleading or inaccurate – simply show how many laps each driver has been on a particular set of tyres. That provides a jumping-off point for the commentators and pundits to explain the significance of it and go through the nuances of different compounds, lap time differences, track conditions, and so on. Even at a basic level, a viewer can then infer that a driver with fresher tyres is going to be faster without potentially being misled by meaningless percentages.

But is this graphic just there to inform the viewer? I’m not so sure. Whenever it’s popped up on screen, the commentators have made a point to mention that the data is powered by Amazon Web Services. It’s a piece of marketing and advertising masquerading as insight. Again, that’s not something that necessarily bothers me (if it did, I wouldn’t be able to enjoy IndyCar nearly as much as I do!) but when it’s being executed so poorly, the level of irritation seems to be amplified – especially as it’s not something we’re used to seeing in an F1 context.

In the interest of fairness, I don’t have a problem with the other ‘new’ AWS graphics which have popped up this season. The ‘Battle Forecast’ is slightly cringey but mostly fine, and although I personally think the ‘Pit Stop Advantage’ one needlessly removes some of the suspense of close battles, it does at least simplify the process of trying to do the maths in your head.

But the Tyre Performance one? Frankly, two races in and I’m already tired of its performance. It tries to offer too much information and in doing so, it only succeeds in offering absolutely nothing. 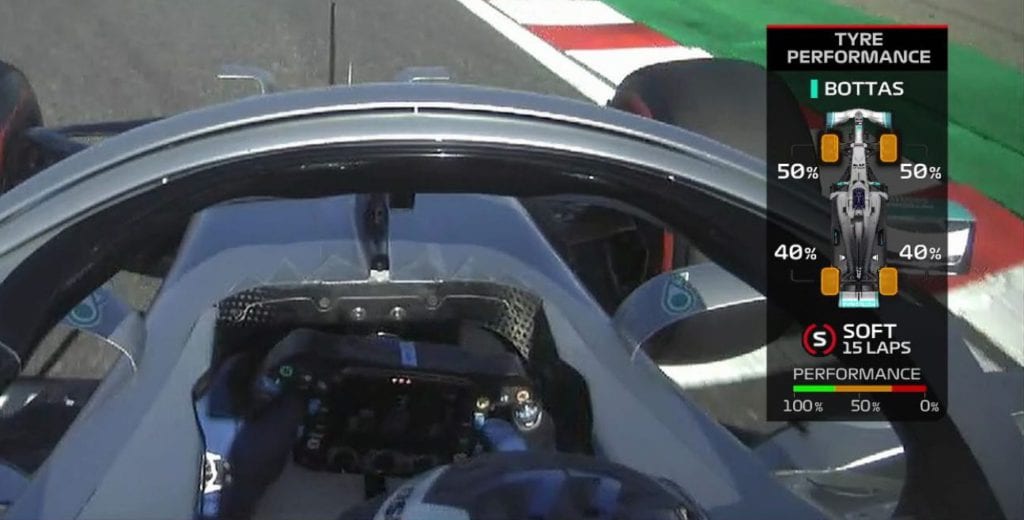