F2 Showed Us Just How Chaotic Sakhir Qualifying Will Be

A dramatic crash between Mick Schumacher and Roy Nissany in F2’s qualifying hinted at how crazy F1’s qualifying around the Bahrain ‘outer’ circuit could be on Saturday.

The crash, which occurred just moments before the session came to an end, saw title-contender Schumacher make a pass on Nissany for track space which backfired and caused Nissany to mount the back of Schumacher’s car.

Schumacher, who will start the final Feature Race of the season in 18th, wasn’t able to find the pace during qualifying and poorly judged the pass on Nissany in the final minutes.

The pair touched wheels which sent Nissany flying off the track, but when rejoining he caught his front-right wheel with Schumacher’s rear-left which launched the car up into the air.

HUGE implications for the championship?! 😳

Leader Schumacher collides with Nissany in qualifying and is set to start towards the back of the grid 😱#SakhirGP 🇧🇭 #F2 pic.twitter.com/nW3acVSCS0

Schumacher is in a big battle with Callum Ilott for the championship crown this weekend, and with Schumacher now starting in 18th and Illot in 9th the battle is looking rather spicy!

Usually, on shorter tracks, F2 splits up the field in locations such as Monaco. This was not implemented on this short but speedy 3.543 km track as all 22 drivers were let loose at the same time.

Rather than play it safe and go on the track when it’s quieter, it appears that everyone wanted to get as much slipstream as possible resulting in huge trains of cars.

It’s thought that this could be similar to what we can expect from F1 tomorrow during their qualifying, which means it could be one of the wildest we have seen all year!

Are you enjoying seeing F1 on this shorter race circuit? Let us know in the comments. 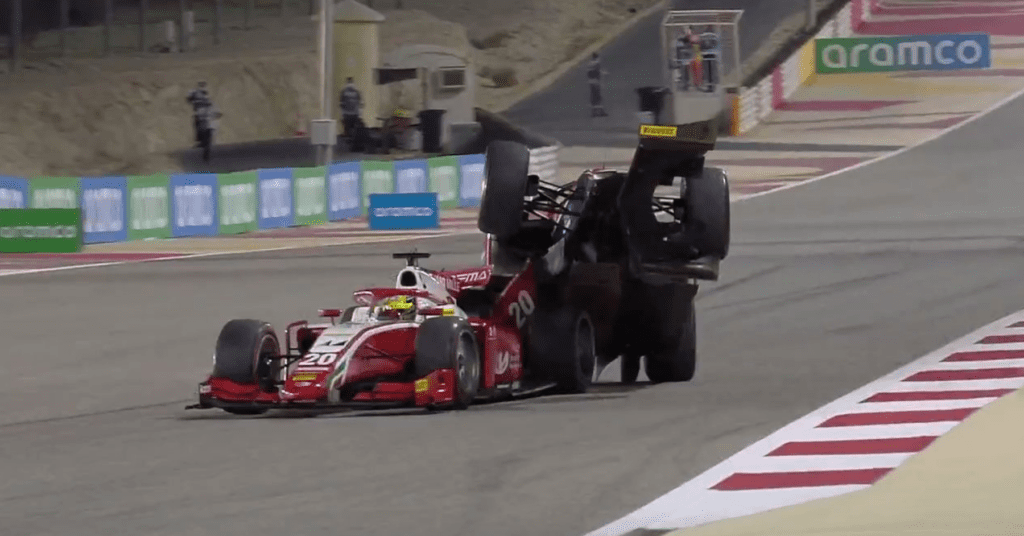