For a grid of 30 young drivers who haven’t raced in months, the first F3 race of the year was remarkably clean. Although pole-sitter Sebastian Fernandez took himself out of the race at the first corner, the other 29 drivers all went on to finish in a largely incident-free race. Renault junior driver Oscar Piastri took the win ahead of Logan Sargeant, with Alex Peroni finishing a fine third in his first race since he broke his back in a horrific airborne accident at Monza last year.

After the race, the top three pulled into the pits, ready to put the new 2020 podium procedure through its paces.

First, the three of them went into a garage, where each driver had their own little table with their hat, some water, a towel, face masks, and a place to put their helmets.

After a couple of minutes in the cooldown garage, they were then called out to the podium, which is located in the pit lane. There are still plinths for the drivers, spread out to maintain social distancing, with the national anthem playing as usual.

After the anthems, the drivers were swiftly handed their trophies by a gloved and masked official, at which point they were (somewhat surprisingly) allowed to indulge in the tradition of spraying champagne. The masks prevented anyone from taking a swig, which’ll be bad news for Kimi Raikkonen if he manages to get a podium this year – unless he wants to try and suck it through the mask, he will not have the drink.

And we were the first to test out if it was champagne-proof 🍾😜#AustrianGP 🇦🇹 #F3 pic.twitter.com/XruTFadMHl

Whether F1 will actually do the same thing or go for a different approach on the pit straight or something remains to be seen. But as a substitute for the normal podium procedures, this seems to work pretty well. A bit weird with the lack of people, sure, but decent nonetheless.

Update: Formula 2 had a different podium procedure, with the top three pulling onto the pit straight and having the ceremony there – which seems more like the sort of thing we might see in F1. 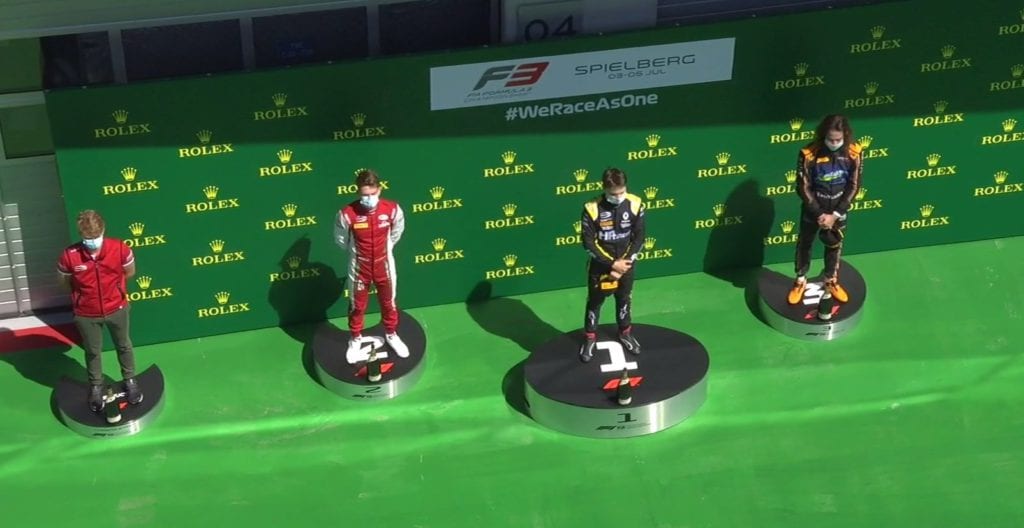