Those blue and red stripes littering Paul Ricard aren’t just there to look pretty – they’re also designed to slow out-of-control cars down. The blue lines are slightly more abrasive than the regular asphalt, whilst the red ones are incredibly abrasive to the point where running onto them will probably require a driver to take on some new tyres. It was designed as an alternative to gravel traps but the idea hasn’t really taken off as most circuits have just opted for regular asphalt run-offs.

It’s left Paul Ricard with a distinctive look though, but the combination of all those stripes along with the obviously visible alternative track layouts (there are 167 of them!) is leaving viewers confused and feeling a little ill.

Trying to see the track from the helicopter shots…. pic.twitter.com/JBmXyfUFj5

#skysportsf1 #f1 all the stripes in runoff areas are not good for TV. Giving me a headache and can't make out where the track is

Paul Ricard is giving me a headache already with all the run-off and different track configurations. I can’t believe France doesn’t have a better venue. #FrenchGP

I legitimately think it's making me slightly nauseous watching the screen. Never had that before.

Watching FP1 is almost making me nauseous, and I don't get nauseous easily. There's so much runoff the cameras are literally a mile away from the racing surface (which you cannot see in the low angle shots)

Wow. So many massive painted lines on the run off areas it makes it hard to tell where the track is! Crazy. @SkySportsF1 @CroftyF1 @tedkravitz #F1 #paulricardtrack

The cameras are too close to the track, difficult to understand what is the line.
They should have covered the alternative corners too.

#bbcf1 The striping on the trackside and run off areas at Paul Ricard is giving me a migraine. Indy Car for me this weekend I think.

All those lines on the MASSIVE amount of run off are a bit painful on the eyes and don’t work on TV. What’s happening on the blacktop seems to be a sideshow.. #F1 pic.twitter.com/QNAqIun5Wu

@SkySportsF1 started watching practise & I have to say the run off areas make viewing somewhat confusing, makes my eyes hurt

Paul Ricard is a huge mess of layouts and looks like some secret polygon in the middle of nowhere, and I for one think that's actually really cool. #F1

Run off areas are giving us a headache !! Awful !

That chicane is an absolute eyesore, horrible trying to pick out the track amongst the layout outs and run-off

160+ track configurations. Plus. Do you want to play stop the car? pic.twitter.com/OOTlSt3qec

Watching other series race on the circuit hasn’t seemed to generate this issue before, so why now? Is it the speed of the F1 cars? Is FOM using camera angles which exaggerate the effect of the stripes?

Either way, that’s a lot of people finding it awkward to watch and you have to say – they definitely have a point. 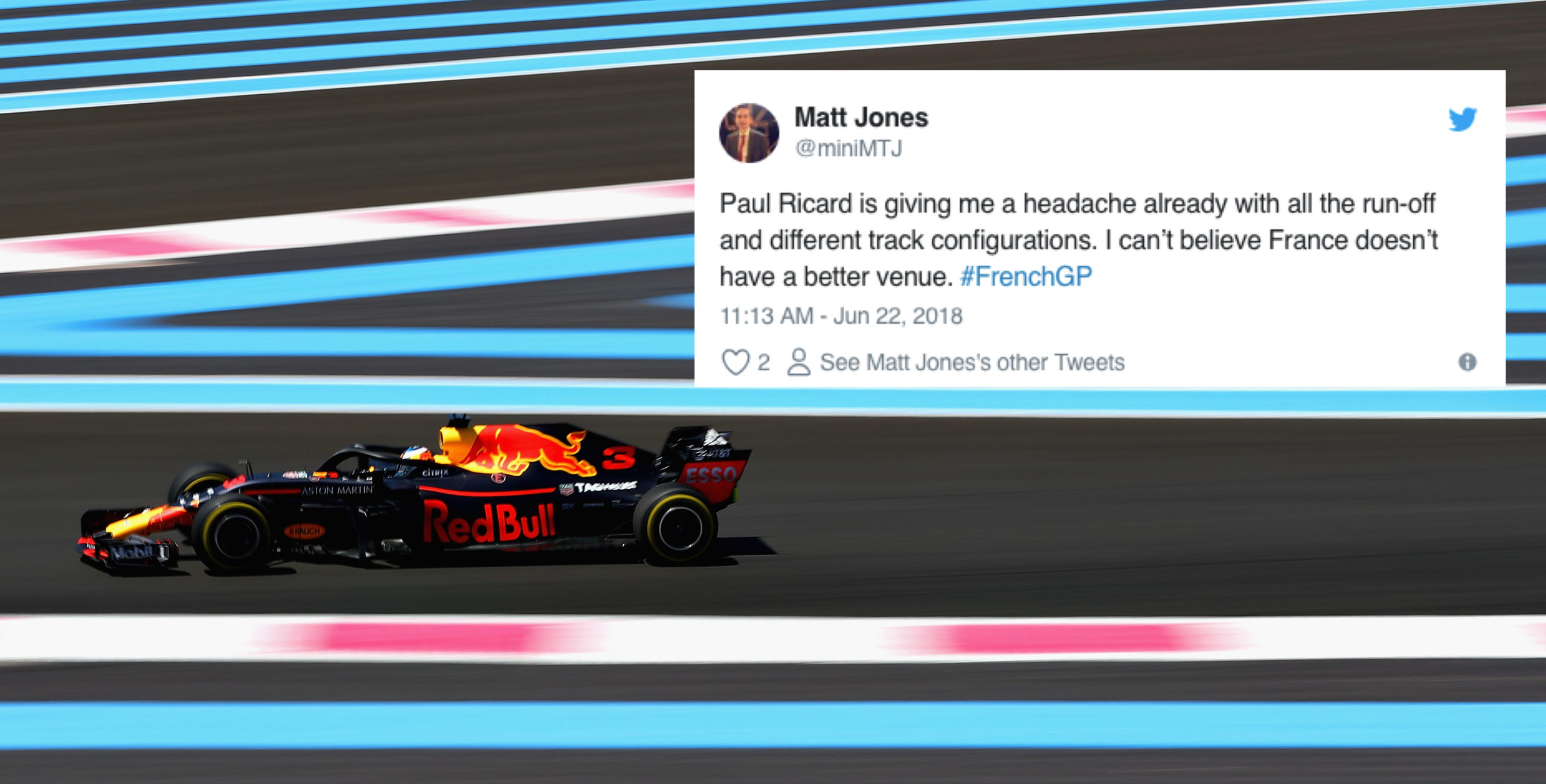