Felipe Massa just announced his retirement from F1 for the second time, presumably this time for good.

“Felipe Baby” has enjoyed a long and successful stint in F1, which started way back in 2002 with Sauber. There was then his race-winning and almost title-winning run at Ferrari, before he found a home at current team Williams.

He’s been a good sport along the way, and showed it again by coming back for another season after Valtteri Bottas was poached by Williams this year. Now with his seat on the line, he’s chosen to retire on his own terms. Here’s a look at some of his best moments.:

He probably doesn’t remember this so fondly, but the way he reacted to his 2008 Brazilian Grand Prix title defeat to Lewis Hamilton – despite taking a beautiful win – was truly inspiring and proved just what a good, honourable guy he is. Respect.

Not being able to see through your visor isn’t great when racing in F1, but Rob Smedley clearly didn’t need Massa’s complaining during the red flag at the 2009 Malaysian Grand Prix. The race spawned the classic line, “Felipe baby, stay cool”. It’s probably one of the best radio conversations in F1 history!

Massa’s unimpressed dad became a huge meme after the 2016 Belgian Grand Prix, after the camera cut to his disapproving facial expression during the race when the Brazilian driver was demoted to seventh place by Sergio Perez. Then the internet took over, with absolutely brilliant results.

A F1 driver’s maiden victory is always special. Massa managed it in his first season with Ferrari in 2006 at the Turkish Grand Prix, which wasn’t the most thrilling of races. But there was no denying the fact it was a beautiful, faultless performance and put Massa properly on the map.

Too old for that

Another brilliant radio line from Massa, he was clearly worn out after an intense battle with his Williams team-mate Valtteri Bottas at the 2015 Italian Grand Prix. He was trying to hold onto his podium spot and just managed to do so, before saying on the cool down lap: “I’m too old for that, guys. Too old.” Well clearly not!

Winning on home soil is probably a pretty special feeling. Most of us wouldn’t know. Even Massa’s countryman Rubens Barrichello wouldn’t know. But Massa did take victory at Interlagos twice, first in 2006 – where he was the first Brazilian to win on home turf since Ayrton Senna in 1993 – and famously in 2008. Both great drives, showing off what he could do when everything came together.

Massa and his family have struck up a strong bond with Daniel Ricciardo, which eventually led to Massa’s son Felipinho challenging the Red Bull driver to a kart battle. It all went down on a large balcony with Crazy Karts, which Ricciardo ended up losing. It’s just a shame it was filmed in portrait…

“Fernando is faster than you”

He probably shudders every time he hears those words, “Fernando is faster than you”. It, of course, all went down at the 2010 German Grand Prix when – after storming into the lead – Massa was told to let his team-mate Fernando Alonso through. He duly did so and Alonso went on to win, leaving Massa in second place despite his brilliant performance. Boo.

Undoubtedly his most dominant victory, Massa was in another league at the 2008 Bahrain Grand Prix, seizing the lead from pole-sitte Robert Kubica at the start and sailing to victory. His team-mate Kimi Raikkonen finished 3.3 seconds behind him, but Massa had it all under control. Ice cool under pressure!

The Crazy Kart race with Ricciardo all stemmed from his brilliant prank battle between Massa and the Red Bull racer, which we all got to see and laugh about on social media. It basically involved putting their own stickers all over the other one’s car or bike. It’s rare for drivers to get on so well so their whole friendship is pretty cool.

Crashing out wasn’t the way we thought we’d wanted him to finish his final home grand prix. But it turned out to be absolutely perfect as he walked back to the pits carrying his national flag. The crowd cheered, Felipe cried, marshals cried, we all cried, and as he walked through the pit lane other teams gave him a standing ovation.

Having a more emotional race in Brazil this year is going to take…well, unless he wins (ha!), it probably won’t come close to matching it.

This article was originally posted on 10 November 2016 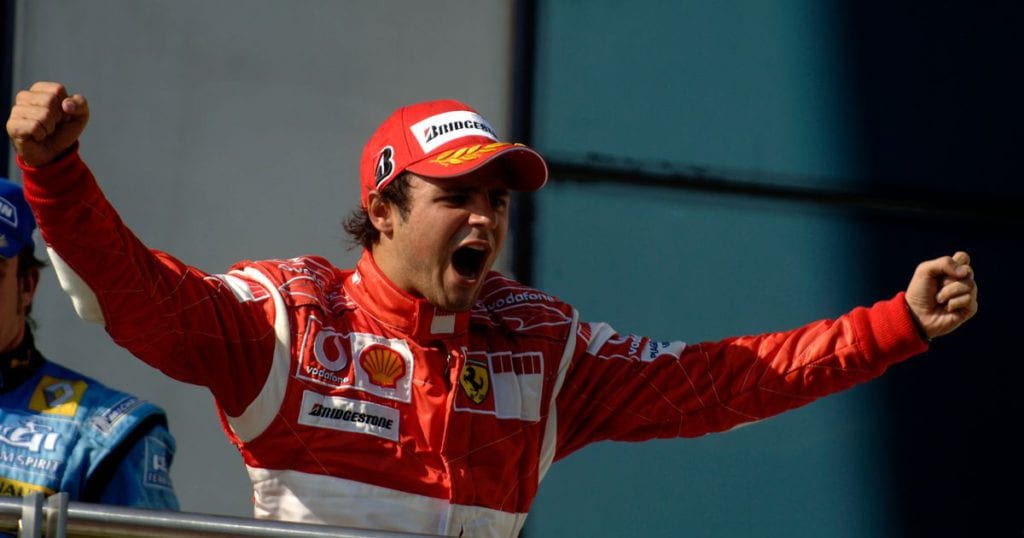