Fernando Alonso Had A Close Call During Indy 500 Practice

The build-up to the Indianapolis 500 is really getting into the nitty-gritty now. ‘Fast Friday’ sees teams and drivers really start to push the limits of their cars as they gear up for the qualifying weekend, and typically the fastest laps of the entire month are seen during the session.

I think it’s safe to say that Fernando Alonso is pretty comfortable with his new environment now, as shown by the fact that he became the first driver to put in an average lap speed of more than 231mph (albeit with a bit of a tow).

Now any racing driver knows that one thing you can do to shave a bit more laptime off is by using all the track, but at Indianapolis doing that can be a risky game. Alonso came mightily close to having a major shunt coming off of turn four, kicking up dust as he exited the corner.

Funnily enough Alonso has plenty of experience with that wall – in the 2004 US Grand Prix a sudden rear tyre deflation sent him spinning into it and out of the race. 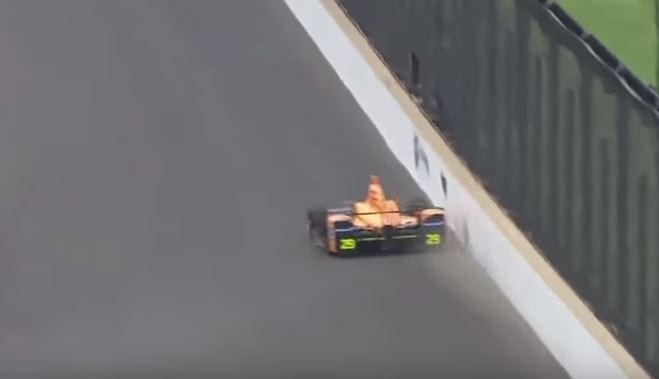