Following a fourth consecutive nightmare season since his return to McLaren, Alonso took the decision to take a break from F1 in order to pursue other challenges. It’s a fair observation to say that it’s paying off for him at the moment – his and Toyota’s momentous victory with Kazuki Nakajima and Sebastien Buemi at Le Mans last year was followed up by success at the 24 Hours of Daytona in January, this time with Wayne Taylor Racing team-mates Jordan Taylor, Renger van der Zande and Kamui Kobayashi.

Alonso will also make his second appearance at the Indianapolis 500 with McLaren in May trying to surpass his valiant, but ultimately futile attempt from 2017.

McLaren has announced that Alonso will drive the MCL34 at “selected tests” this year and work on the development of 2020’s MCL35. The test outings will complement his role as a McLaren ambassador and advisor to the drivers and engineers. McLaren must use a ‘rookie’ driver who has competed in no more than two grands prix for two of the four in-season test days, though that would leave Alonso free to drive in the remaining two days if he’s needed. He’s been hanging around the paddock in Barcelona this week, though, so maybe he’ll get behind the wheel a bit sooner than expected.

Yet to close the door on F1, Alonso told Autosport that he wants to remain committed to McLaren for the foreseeable future.

“I said before I stopped racing in Formula 1 last year that I see myself with McLaren for a long time to come, so I am delighted at this new role and the ability to stay closely involved with the team I feel is my spiritual home. We have the Indianapolis 500 in May of course, which I am looking forward to immensely, but this is just the beginning of many things we can do together.”

“I am particularly passionate about nurturing young talent, whether that’s with my own team or helping the new generation of Formula 1 drivers at McLaren unlock their true potential. This is important to both the team and myself, so will be an especially rewarding part of my role.”

McLaren heads into the 2019 season with a new line-up of former Toro Rosso and Renault driver Carlos Sainz and junior graduate Lando Norris. Early impressions of the pair have been largely positive – they seem to get on well, too.

Zak Brown, CEO of McLaren’s racing division, said that Alonso not only brings a wealth of experience to the team, but a certain commercial bonus too. But no Kimoa – well, not on the F1 car.

“For any race team, having someone of Fernando’s class on hand to provide support through his experience is of huge value. His insights and perspective will be welcomed by both our drivers and engineers alike, while his stature and character remain highly appealing to our partners and fans.”

So, Mika Hakkinen has another two-time F1 champion to join him in the ambassadorial role.

Will we see Alonso back full-time in the future or, like Hakkinen’s ‘sabbatical’, will he take his deck chairs and sunglasses and settle elsewhere? 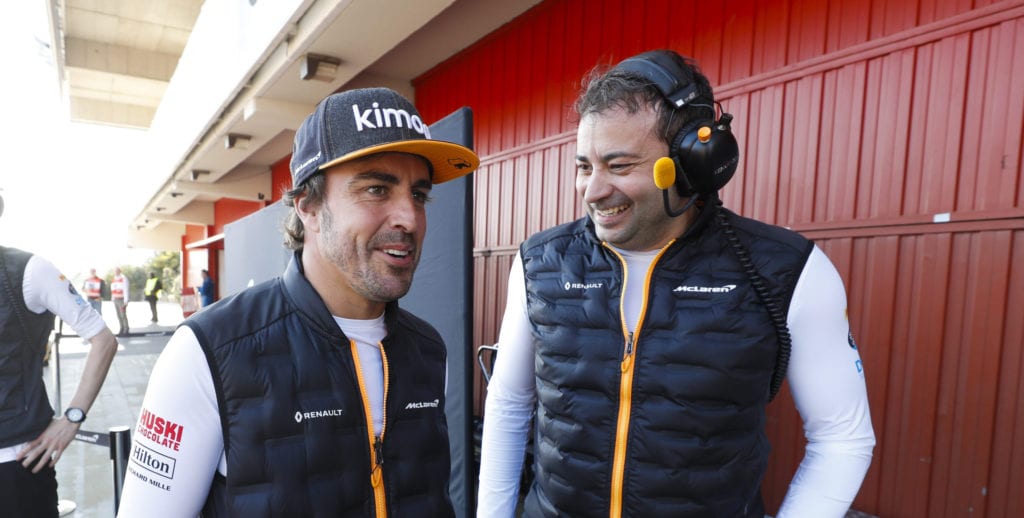