FIA's Masi Responds To Why A Crane Was On Track During The Start Of Q2 - WTF1
Skip to content
×
Formula 1 , News
5 comments

During qualifying at the Turkish Grand Prix, a recovery vehicle and marshals were still on track when Q2 was given the green light under wet and slippery conditions. Many have questioned how an event like this can happen again, especially after the death of Jules Bianchi in 2014.

FIA race director Michael Masi has responded to why this was ever allowed to happen, putting blame on the Clerk of the Course who told him the crane would be gone by the time the cars made it round to Turn 8.

“We released the cars from pit lane as the recovery vehicle was moving to the escape road, following information given to race control by the Clerk of the Course that the vehicle would be clear of the track before the cars on their out laps reached Turn 8 where the recovery was taking place,” Masi told RACER.

“As soon as it became apparent that the recovery vehicle had been delayed in moving completely into the barrier opening, we extended the area of double waved yellow flags from Turn 8 to the entry point of Turn 7 to further slowdown the cars on their out laps.

“Clearly this is not a scenario we want to see, and with the benefit of hindsight we would have done it differently and held the cars until the recovery was completed. We will review our procedures to minimise the likelihood of similar incidents in future.”

However, many have viewed onboards from drivers such as McLaren’s Lando Norris and spotted that a green light was shown with the recovery crane still on the track.

Although Norris was warned about the recovery vehicle through team radio, it’s another very sketchy incident.

This year we have seen Charles Leclerc racing for two laps without wearing a seatbelt, as well as marshals still on the track in Imola when cars were told to unlap themselves.

Please @F1 how on earth can you start the session with the safety truck on track still!?!? Have we not learned from the past? I can’t believe it. #F1

Many have made comparisons to the accident that took the life of Jules Bianchi at Suzuka in 2014 when during wet conditions he slid off the race track and made contact with a recovery vehicle.

Either way, this was an unacceptable and shocking decision. 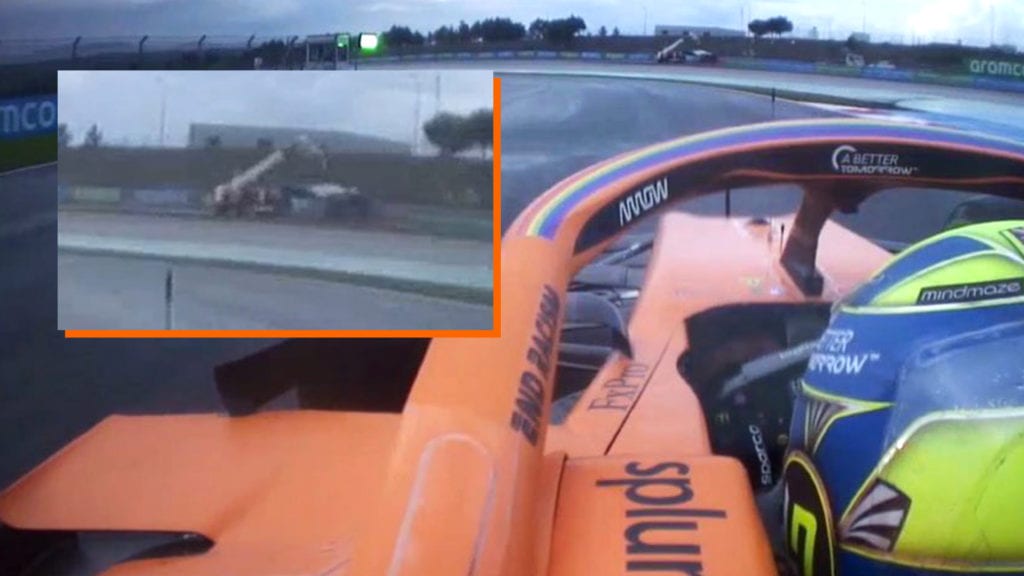