GTE is often the most closely fought and exciting category in WEC races but from next season, the numbers will be slightly depleted. BMW is ending its involvement after just one season with its M8 (RIP ‘big M8’ memes) while Ford is also calling time on racing its GT in the series, having returned to endurance racing in 2016 with the gorgeous (and slightly controversial) Ford GT.

That makes next month’s 24 Hours of Le Mans the final WEC event for both and to celebrate, Ford is going to run its four cars in throwback liveries which pay homage to the one-two finish in 1966, Dan Gurney and A.J. Foyt’s ‘all-American’ win in 1967, and the marque’s class win in 2016 on the 50th anniversary of that first triumph. Spoiler alert: they all look superb.

The No.66 car is a tribute to the Ford GT40’s first Le Mans win back in 1966, when Bruce McLaren and Chris Amon led home a famous Ford one-two-three finish in the black and silver No.2 car.

The second car in that one-two-three was the No.1 car of Ken Miles and Denny Hulme. They were actually on course to win the race but Ford bosses ordered the three cars (one of which was 12 laps down) to converge and cross the line together.

The idea was to stage a dead heat, but unsurprisingly, it didn’t work. The No.1 car backed off slightly too much and handed the win to McLaren and Amon in what is officially the closest Le Mans finish of all-time. It would have been obvious for Ford to go with the famous Gulf livery for one of the cars, so it’s nice to see a nod to the GT40 that perhaps should have won Le Mans on the No.69 car.

The No.67 car is decked in the red and white colour scheme of the car that won the race in 1967. That year, Ford rocked up to Le Mans with the ultimate version of the GT40 – the Mk.IV. Dan Gurney and A.J. Foyt took the lead in the second hour and pulled ahead to win. After the race, Gurney sprayed his bottle of champagne on the podium, kickstarting a motorsport tradition.

Fast-forward to 2016 and you come to Ford’s return to La Sarthe with the reimagined GT. Joey Hand, Dirk Muller and local boy Sebastien Bourdais took class honours on the car’s Le Mans debut and that exact same trio will drive the car in 2019. Although the current livery isn’t actually that different to the one used three years ago there are some slight differences, and so the No.68 car will run in those colours.

It’s hard to pick a favourite, but we’re kinda digging the No.69 simply because of the story behind it. It’s hard not to love how mean the No.66 car looks in black, though. 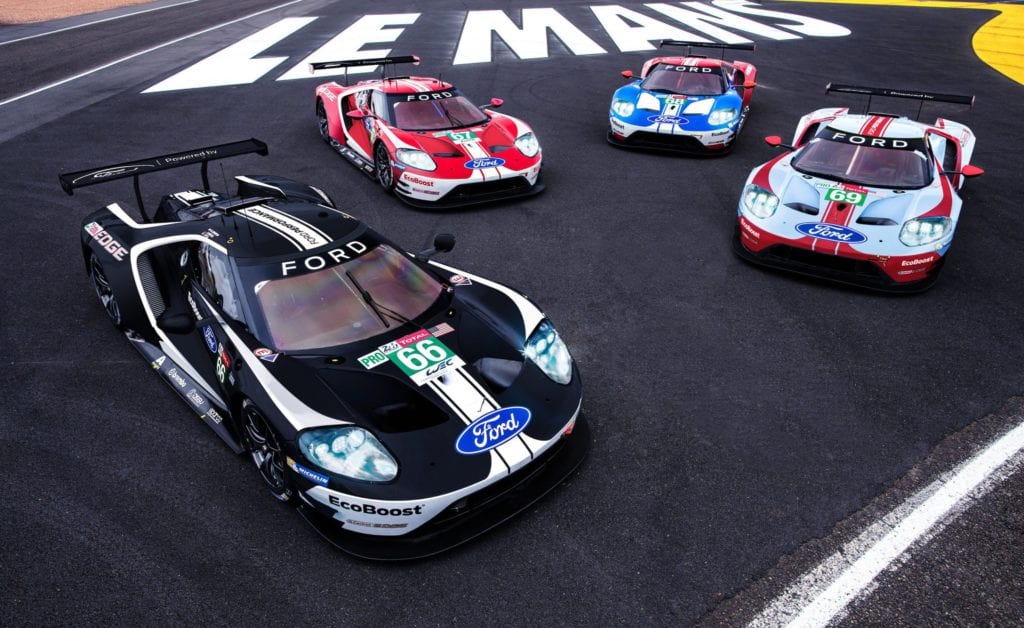