In the late 1980s and early 1990s, there were so many teams having a stab at F1 that for some of them, simply qualifying for a race could be considered an achievement. For instance, in 1991, 18 different teams were rocking up to every race weekend – Friday morning pre-qualifying would knock out four drivers, while another four would miss out in regular qualifying.

By the mid-1990s, rising costs had knocked out most of these small operations, and the last time F1 actually ran a race with a full 26-car grid was in 1995. But that makes this period ripe for quality liveries from backmarker teams. Again, as in Part 1, we’re considering a ‘backmarker’ as any team which had no more than one points-scoring finish during a season.

Started by two-time Le Mans winner Gerard Larrousse, the team ran from 1987 to 1994 and actually used chassis made by Lola (a point which got the team into trouble in 1990). Livery-wise, multiple sponsors on the team’s dark blue and red colours led to the cars having a bit of a ‘discount-toy-shop-Benetton’ look to them – but in a good way.

At times, the team flirted with becoming genuine midfielders and the LC89 was occasionally quite quick, if unreliable. That said, the team only managed a single point all year, and five-time grand prix winner Michele Alboreto failed to qualify the car for the last three races of the year, making it one of Larrousse’s least successful seasons.

An orange car with the number 33? No, this isn’t a time-travelling Max Verstappen tribute livery, but Oscar Larrauri in the sole EuroBrun entry in 1989.

It was the team’s second season and, having started the year with a white car, the rather sleek-looking ER189 gained a fetching orange livery thanks to sponsorship from Jagermeister. It did nothing for the team’s fortunes, though, and neither Larrauri nor Gregor Foitek (the driver he replaced mid-season) managed to qualify for a single race. EuroBrun returned the following year, only to go bust before the season was through.

Osella ended a decade of not achieving much in F1 with perhaps its smartest car yet, the FA1M-E. A major sponsorship deal from Fondmetal led to this superb colour scheme which looks a bit like a Repsol livery.

Sadly, it didn’t do much for the team’s fortunes. Olivier Grouillard was Osella’s only driver, failed to qualify for seven races, and managed a best result of 13th. At the end of the year, Fondmetal took over the F1 team entirely, and Osella went back to making sportscars.

The once-great Brabham team was on its knees in the late 1980s to the point where it had to miss the entire 1988 season because it didn’t have an engine supplier. The near-complete lack of sponsors on the 1990 car hints at the problem – a lack of funding – but is also the reason why the BT59 looks so damn cool. The dark blue and white design fits great with the aggressive, angular stying – even if it does look like to sort of thing you’d see on the cover art of an unlicenced F1 game from the early 1990s.

Adding to the cool factor is the fact that David Brabham got to drive for the team started by his father in the 1960s. Unfortunately, he failed to qualify on six occasions, while teammate Stefano Modena’s fifth place at the season opener in Phoenix was the team’s only points score. Two years later, Brabham was gone from F1 altogether.

Leyton House (formerly known as March) had enjoyed some good results when Adrian Newey was designing the cars. But by 1991, he was gone, and the performance went with him – a single sixth-place for Ivan Capelli in Hungary was the team’s only points finish.

Thankfully, one thing that remained was that utterly gorgeous sky blue livery, set off with flashes of green from the BP sponsorship. In a season of fantastic looks cars, it still stands out as one of the most attractive.

The team reverted to the March name for 1992 – its final season in F1 – where all manner of minor sponsors spoiled the look of the livery somewhat.

No, this isn’t photoshop to make an F1 car in the livery of Fernando Alonso’s 2018 helmet design – it’s just a weird coincidence that in 1991, a small, uncompetitive French team somehow predicted how a Spanish two-time world champion would paint his lid. It looks just as good in car form, too, as used on the AGS JH27 (and its predecessor, the JH25B).

AGS first raced in F1 in 1986 but never really made much of an impact. Although the team did manage two points-scoring finishes in its history, its best year was probably 1988, when Philippe Streiff managed to qualify for every single race. The same couldn’t be said of 1991 – multiple failures to progress past qualifying saw AGS shut up shop two races before the end of the year as money ran out.

Andrea Moda: a team so bad that it didn’t care about its second driver, Perry McCarthy. Literally. They didn’t bother helping him get a super licence, deliberately sent him out on track with wet tyres on a dry track, and at Spa sent McCarthy out with broken steering components. But despite getting the ‘number 1’ treatment, teammate Roberto Moreno didn’t fare much better, though he somehow managed to qualify the car at Monaco. The team was eventually banned from F1 after team owner Andrea Sassetti was arrested in the paddock at Spa on charges of forgery.

But despite all of this, damn did the car look good. The S921 had initially been designed for BMW ahead of a planned entry in 1990 and in Andrea Moda’s all-black livery, it’s a handsome (and slightly sinister) looking machine.

Minardi made a ton of good-looking cars and the Lamborghini-powered M192 was one of its best; you’ve gotta love that combination of black, yellow, and white.

Unfortunately, it was also one of its worst at a time when Minardi was actually a solid team (in comparison to some other outfits, anyway). Christian Fittipaldi managed a point at Suzuka, but there were also six mid-season DNQs.

If you ever needed proof that F1 needs more purple cars, then the S941 is it. It’s a glorious shade which, combined with the MTV sponsorship, just looks so 90s.

Simtek had designed the BMW that Andrea Moda used in 1992, as well as worked for a number of other clients, so in 1994 just decided to go all-in and start its own team. Tragically, Roland Ratzenberger died in one of the cars at Imola. The team continued but with no major results and, despite Jos Verstappen displaying some promise the following year, Simtek went bust after the 1995 Monaco GP.

The combination of bright yellow and the blue of main sponsor Parmalat (courtesy of driver Pedro Diniz) along with the green wheels meant that newcomers Forti certainly had a striking machine for their first season in 1995.

Unfortunately, the car was incredibly slow, to the point where Diniz and teammate Roberto Moreno were lapped so many times in Argentina and Imola that they weren’t classified as finishers in the results. Forti spent much of the year fighting for the honour of last with Pacific, though Diniz came close to scoring a point at the season finale in Adelaide when he finished seventh (albeit out of only eight finishers).

Diniz’s departure the following year meant that the Forti lost its attractive blue hints as the car became adorned with an altogether more random assortment of sponsors. An ownership change during 1996 saw the cars switch to a white and green colour scheme, and the team disappeared after that year’s German GP.

Read Part 1 of this series, covering from 1979 to 1986, by clicking here. Part 3 will be released next week and will take us up to the present day.
Top image (c) XPB Images 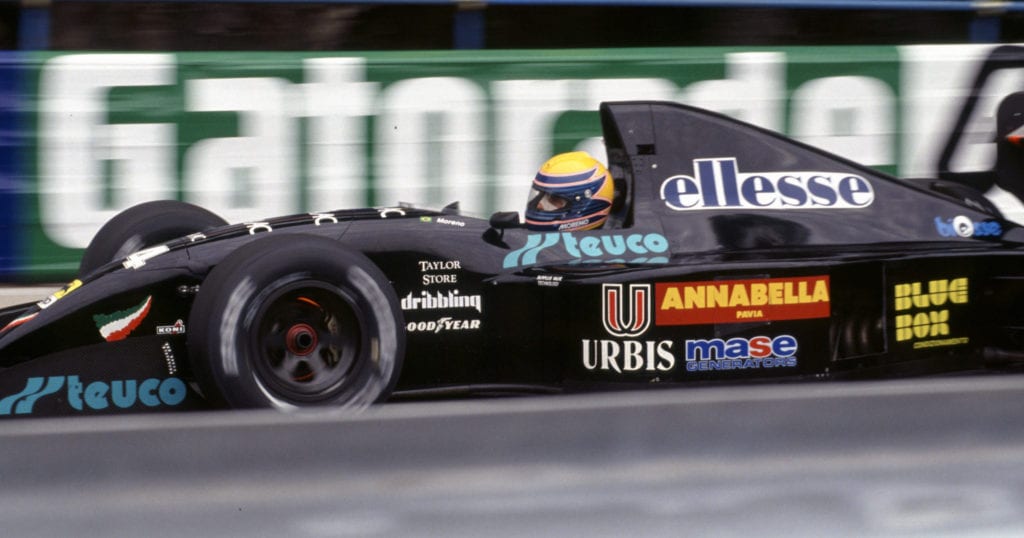