Over the last couple of decades, the increased costs and professionalism of the sport have not only made it harder for teams to get into F1, but harder to remain there. Some of the smaller teams from the 80s and 90s managed to stick around for a while before either going bust or being bought out, manufacturers came and went, and a few new teams managed to compete for a few years before disappearing.

The grids are a lot smaller nowadays and, with more points on offer, fewer teams meet our criteria to be considered backmarkers (no more than one point-scoring finish during the season), hence why this final part covers twice the amount of time as Part 1 or Part 2. But the liveries that are in the list could be considered among some of the best of the era. Let’s tuck in.

Ukyo Katayama brought Mild Seven sponsorship to the small Italian team for 1997 and as it turns out, it worked well with Minardi’s traditional colours of black, white, and yellow. The car wasn’t at all competitive – a pair of ninths for Jarno Trulli early in the year were the best results – and Minardi was the only full-time team not to score a point that year.

It’s a cool-looking car, but I admit its inclusion here is a bit of a personal one. 1997 was around the time I started watching F1, F1 ‘97 was my first Formula 1 game, and I have many a happy memory of trying to take Trulli’s Minardi to the championship. Great liveries evoke great memories, and Minardi certainly managed to do that with me.

Another car from 1997, this time one that didn’t even race – and yet, it’s one of the most striking designs in the field. Lola was kinda forced by main sponsor Mastercard to enter F1 a year before the team was ready. The result was a car that was underdeveloped and almost completely untested – it also had the unfortunate combination of being both incredibly draggy (and therefore slow on the straights) as well as being terrible in the corners due to a lack of downforce. Drivers Vincenzo Sospiri and Riccardo Rosset were 12 seconds off the pace at the first race in Australia, failed to qualify, and the team folded before the next race.

But what a good-looking car it was. The red and orange with blue and white is a great combination of colours and looks like it belongs on a car far more competitive than the T97 was – even if that Pennzoil logo looks a little bit too small on that massive sidepod.

It almost seems harsh to consider BAR’s first effort as a backmarker car, because at times it was quite competitive – Jacques Villeneuve put it fifth on the grid in just the team’s third race at Imola. One thing it wasn’t however, was reliable – Villeneuve retired from the first 11 races on the bounce, and the team’s best result was a seventh for Mika Salo. The team that claimed it was going to achieve so much in its first season ended up last in the championship – behind even Minardi.

But no-one really remembers any of that. They remember the unique livery. BAR had initially wanted to run two different liveries on its cars to promote two different tobacco brands, but that was against FIA rules and the team was told to come up with something else. So it did. BAR simply smashed the two together in an asymmetric design with a zip down the middle. Is it attractive? Hell no. But it’s absolutely one of the coolest liveries in F1 history.

Alain Prost’s team occasionally showed glimpses of potential before the money ran out at the end of 2001, but the year before had been a real low point. Despite having the experienced Jean Alesi and talented rookie Nick Heidfeld in the car, the team couldn’t manage a single point all season (Heidfeld’s eighth in Monaco was the best finish). The Peugeot engine was powerful but unreliable, and the drivers made a nasty habit of crashing into each other.

The one good thing – always the case with Prost throughout its five seasons – was that glorious metallic blue colour scheme. Whatever the angle, whatever the sponsor combination, they always looked impeccable.

Yellow liveries are usually pretty great – they’re bright, fun, and distinctive. In 2000, Minardi decided to turn all of those qualities up to 11 by painting the M02 in fluorescent yellow to create probably the brightest F1 car ever. But aside from being bright, it also looks good – the subtle hints of blue from the Telefonica sponsorship make it a really tidy-looking car – as most Minardis were.

It turned out to be a fairly typical Minardi season, too, as the car performed solidly, but just suffered from a lack of pace. Still, drivers Marc Gene and Gaston Mazzacane managed three eighth places between them, enough to edge the team ahead of Prost in the Constructors’ Championship.

Is there anyone out there who doesn’t like the Orange Arrows livery? It’s just such an unbelievably good colour scheme – in fact, it’s so good, that WTF1’s colours of black, orange, and white are based on the Arrows livery.

The Orange liveries marked the end of the team’s life span from 2000 until Arrows folded during the 2002 season, with 2001’s A22 being the only one that qualifies as a ‘backmarker’ in this list, courtesy of a single sixth place for Jos Verstappen in Austria. And that’s a good thing, because the A22 is probably the best-looking of the lot, with the perfect proportions of black and orange. *Chef’s kiss*

In 2006, a year after Red Bull Racing entered F1, the company also bought Minardi, rebranded it as Toro Rosso, and started to use it as a junior team. The first year was a bit of a struggle, as the team was stuck with using a detuned V10 in a year when F1 had switched to V8s – a legacy of a cost-saving deal that had been done by Minardi the year before. Vitantonio Liuzzi managed Toro Rosso’s only point of the year, with an eighth place in Indianapolis.

And the livery? Spectacular. Instead of just running a palette-swapped Red Bull livery, the side of the car was instead decked out with a bright red, more artistic impression of a bull. But the really cool thing is that it isn’t a decal. Oh no, that intricate design was hand-painted onto each car, a practice that continued until the livery changed in 2017.

After 2008, the bull became a bit smaller and was confined to the engine cover instead of sprawling over the sidepods. They still looked good, but those early Toro Rossos really were something.

Three new teams appeared in the sport in 2010 – Lotus, Virgin, and HRT – and they were all pretty much doomed from the start, having joined on the promise of a cost cap which never happened. HRT struggled the most and in 2011, attempted a unique method to try and attract some crucial sponsorship.

The team employed the services of a Hollywood vehicle designer to come up with a livery and while the colour scheme and chequered flag motifs aren’t particularly special, some aspects of the livery are worth a closer look. With no real sponsors, the team instead used prominent areas of the car (such as the wing endplates and the sidepods) to advertise themselves to potential investors with phrases like ‘This could be you’, ‘Your logo here’, and ‘This is a cool spot’. It’s not what you’d call a classic livery, but it does fall into the category of being so bad that it’s good.

It wasn’t particularly effective, either. The team did manage to fill the spots with some sponsors throughout the year, but nothing that was really going to change the team’s fortunes. HRT’s best result in 2011 was a 13th place courtesy of Vitantonio Liuzzi and the team folded at the end of the following year.

Nothing to do with the original Team Lotus, the team did at least bring back the classic Lotus colours of green and yellow, resulting in some very attractive liveries. The best probably came in 2013 (by which time the team had rebranded as Caterham) as the green became a slightly lighter shade than previous years while retaining the yellow that was completely lost in 2014, Caterham’s final year.

Unfortunately, the old saying that if it looks right, it probably is right didn’t apply to Caterham. As with previous years, the team was stuck fighting with Marussia to be not-last… which they failed to do. A trio of 14th places were the best finishes, though there was a glorious moment where van der Garde ended up third in Q1 at a wet Spa.

Having started life as Virgin and then been known as Marussia, the third of the new teams to join in 2010 was known as Manor in what would be its last season, 2016. It was perhaps its most competitive year, too, with Pascal Wehrlein grabbing 10th place in Austria and regularly qualifying well – especially on power circuits where the drivers could make the most of the Mercedes power.

And what a car to do it in. Not only did the blue and red livery look smart as hell, but the entire team branding, from the pit garages hoarding to the drivers’ overalls, looked incredibly slick. Sure, it might have looked better with a few more sponsors on it, but that would really be splitting hairs. 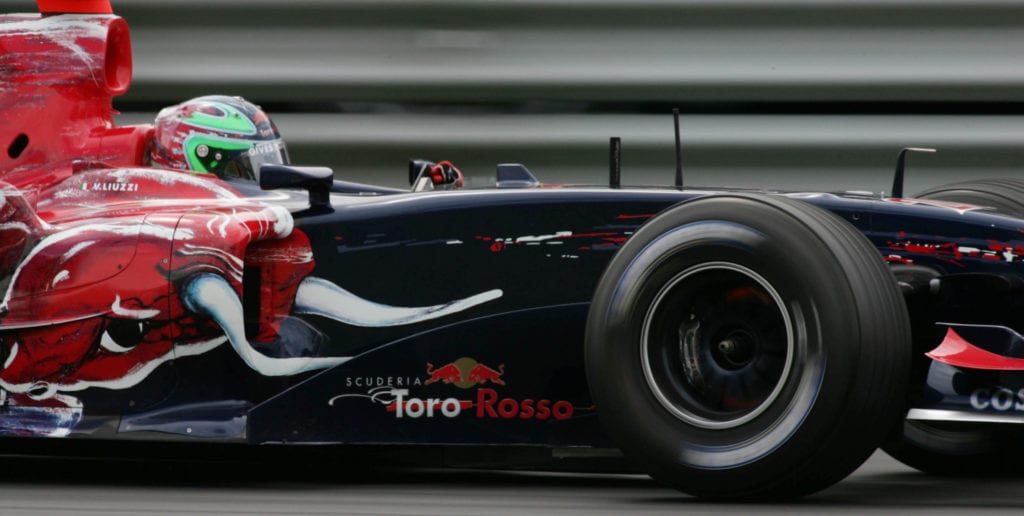