Evans spent the first half of the race glued to the back of Andre Lotterer and although Stoffel Vandoorne stayed reasonably close, it soon became clear it was going to be a one-on-one between the front two. It would also come down to who could manage their two Attack Modes the best.

Evans looked the quicker of the two but couldn’t make a move under normal conditions so became the first to go for his usage. It paid off handsomely but Lotterer didn’t make it easy – after successfully defending the obvious overtaking spots he went slightly deep into Turn 10, allowing Evans a run into the next chicane. That’s not usually an overtaking place but somehow the Jaguar man found a bit of room and snuck ahead, leaving Lotterer just enough room in what turned out to be an awesome move.

Lotterer then used his first Attack Mode, couldn’t pass, and then immediately used his second. Evans tried to use his final one but missed the activation, throwing Lotterer another advantage. He nailed it the second time, just stayed ahead, and then was just about able to manage the gap to the end and claim his – and Jaguar’s – first Formula E win.

Vandoorne claimed his first podium in third, with Robin Frijns fourth, Sebastien Buemi fifth and Oliver Rowland sixth. Jean-Eric Vergne had finished seventh but was given a post-race penalty for overtaking during a full-course yellow, dropping him out of the points.

The start of the race was incredibly frantic as the track was wet, leading to a pile-up which completely blocked the track and forced a lengthy red flag period.

A red flag on lap one after a multi-car traffic jam 🚩 pic.twitter.com/oL8bSQdjwU

With the likes of Lucas di Grassi, Jerome d’Ambrosio and Antonio Felix da Costa having muted races to the lower points positions and Sam Bird having a tough drive to 11th following a first-lap incident, the championship is… well, ridiculously close – the top nine drivers covered by just 13 points. Here’s how the standings currently look: 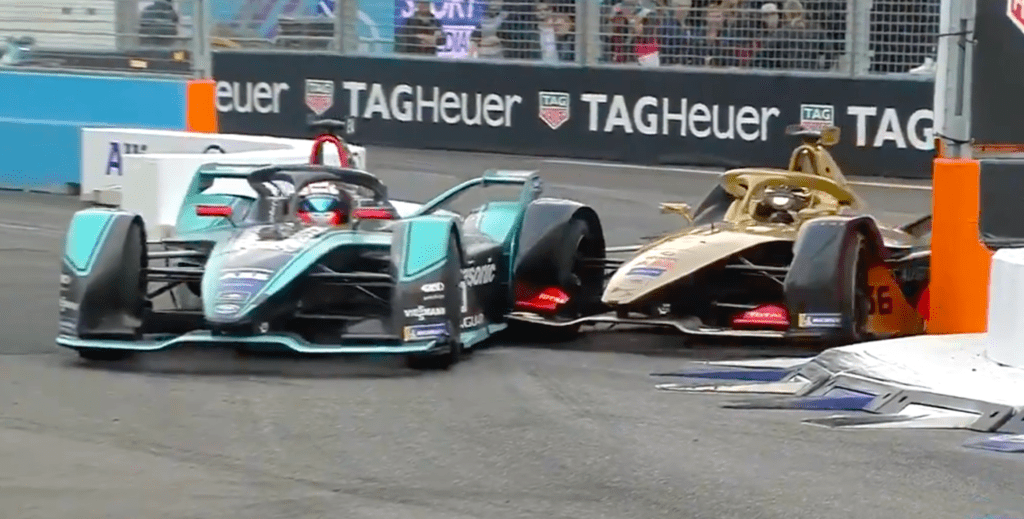