The FIA Formula E Championship have shared images of the crash that brought an end to the race in Diriyah on Saturday. Alexander Lynn, a driver for Mahindra, was launched into the air as a result of contact with another driver but is safe and well after the accident.

Originally not shown on the television broadcast, the footage has now been shared after Mahindra confirmed that Alex had been discharged from the hospital and will race again for the team in the next round in Rome.

It’s also understood that trackside footage did not capture this accident, as it was following another crash that occurred elsewhere on the circuit. This explains why there was no footage of the crash on the international television broadcast.

We are thankful that Alex Lynn is well after this accident. Testament to the medical staff, marshals and the @FIA who keep our sport safe. 🙌 to Mitch Evans who abandoned his race to run to Alex’s aid. #ABBFormulaE #DiriyahEPrix @alexlynnracing @mitchevans_ pic.twitter.com/hp7FTNYR8w

We’re so pleased to hear Alex is alright after such a huge crash.

The other driver involved, Mitch Evans, stopped his race to check if Alex was okay after their coming together. Big respect.

The whole crash reminds us of Mark Webber’s F1 crash at Valencia in 2010 when he was thrown into the air after contact with Heikki Kovalainen.

On behalf of @MahindraRacing I would like to thank the track marshals, MDD, the ambulance services and the staff of King Khaled Hospital, Riyadh. You are heroes. Truly appreciate your immediate and excellent care. We are grateful 🙏 🙏 #ABBFormulaE #fia https://t.co/ZV6m2K7lXD

In the end, the Formula E race was red-flagged with minutes to go handing victory to Sam Bird.

This victory continues Bird’s record of being the only racing driver to have won a race in every season of the all-electric championship and his first win with his new team Jaguar Racing. 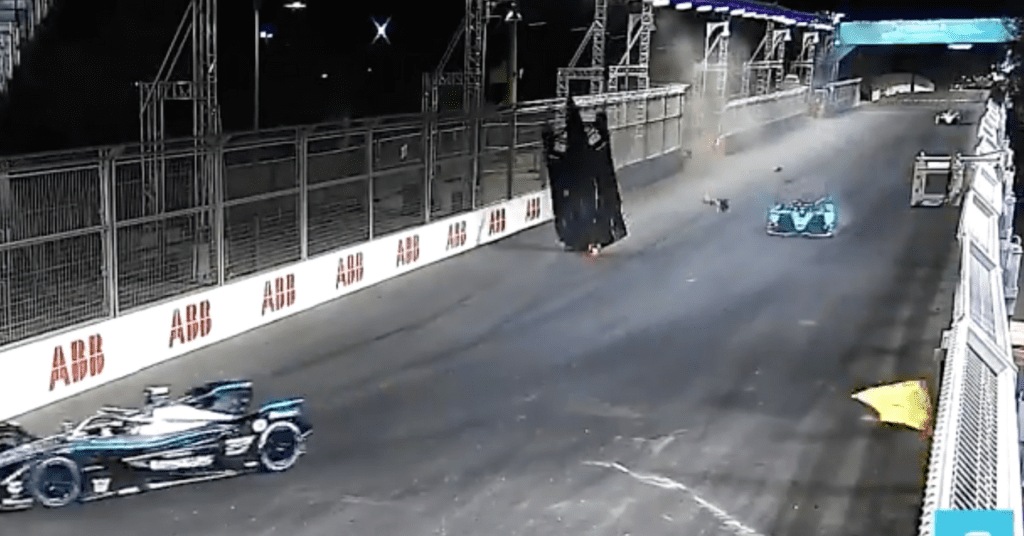