‘You can’t race around Monaco’. That’s one of the first things you learn in motorsport. It’s only there because it’s sexy and glamorous, the cars are only good to watch in qualifying, the race will be boring. But no one told Formula E that.

It was the first-ever race for the all-electric World Championship around the full, historic Monaco track, and they made it worth it. It was nuts. They better be back every year!

As soon as we went green, there was immense, impossible racing. Cars were three-wide on the run up the hill to Massenet. It was just absurd.

Da Costa led away from the pole with Frijns behind and Evans in third. Frijns wasn’t for letting Antonio control the race at the front, and a few laps into the race, he took the lead at Ste Devote!

I remember watching the Monaco GP in 2015 when Max Verstappen passed Pastor Maldonado at that very corner, and we were screaming. You do not pass at Ste Devote. However, it became second nature to the Formula E guys.

What was expected to be a slow burner and a strategic race conserving energy became an excellent nip and tuck battle between Frijns and Da Costa. The lead kept changing hands whilst taking turns using Attack Mode, da Costa was eventually able to get back into the lead. But it wasn’t over there, as Frijns was able to take the lead back again!

Frijns pulled away with Attack Mode, and Evans, Jean-Eric Vergne and Max Günther were tripping over each other behind. Frijns then had a lead with two seconds back to da Costa, but he made a mistake and lost a second and a half, which allowed the much faster da Costa to catch up.

So. Much. Action. ⚡️@maxg_official making the most of the battle up ahead 👀

Antonio used fanboost through the tunnel to sweep in front of Frijns for yet another move for the lead!

The two leaders fighting meant that Evans could catch up, and soon blasted past Frijns on the pit straight. Evans then caught up with Da Costa and made a fantastic move at the top of the hill to go through a gap that didn’t exist for the race lead – a complete role reversal for the top three!

Evans took the lead at just the right time, too, because, half a lap later, the Safety Car came out. René Rast’s car was stopped on the exit of Ste Devote. He had a broken rear suspension after he understeered wide whilst racing Nick Cassidy. The battle itself was appropriately known as RAS-CAS, like the famous turn on the Monaco circuit. Credit to Jack Nicholls for that one.

We had a few minutes to reset and regroup and figure out how the hell that had just happened.

After the Safety Car, there was an energy reduction, but unlike in Valencia, it worked perfectly and meant that the final dash to the flag still had the energy management that makes Formula E such a challenge.

For the final laps, da Costa, with more energy, was all over the back of Evans at every corner. Evans was defending all over the place, the racing line was out the window, this was survival, and he positioned his car perfectly into every braking zone!

“You all know what race I’m thinking back to right now,” screamed Jack Nicholls and the Senna vs Mansell 1992 comparison was well deserved. The defence from Evans was seemingly impossible, with da Costa desperate to get past.

On the final lap of the race, da Costa lunged it into the chicane. He was too far back. He was all locked up. He wasn’t going to make it the corner, let alone take the lead…surely not?

But, he did it! He stopped the car! He even made the apex! Unreal. Absolutely beautiful.

Da Costa then led to the flag but it wasn’t done for Evans, who was still having to conserve energy. On the pit straight, Frijns got alongside Evans and literally took the position on the finish line. He finished the race in second and now leads the drivers’ standings.

That was only the battle for the top three.

Fourth was Jean-Eric Vergne who fought past five cars because he had to take Attack Mode again having missed it earlier in the race and he nearly got on the podium at the end. Max Günther and Oliver Rowland were fifth and sixth. Sam Bird and Lucas di Grassi were seventh and eighth. They started in 16th and 17th, respectively. The two have raced in every Formula E race and know how to do well anywhere, even when they were starting that far down in Monaco.

I still can’t cope with this race. Wow.

Unsure about Formula E? Give this race a watch and tell us if you’ve changed your mind. 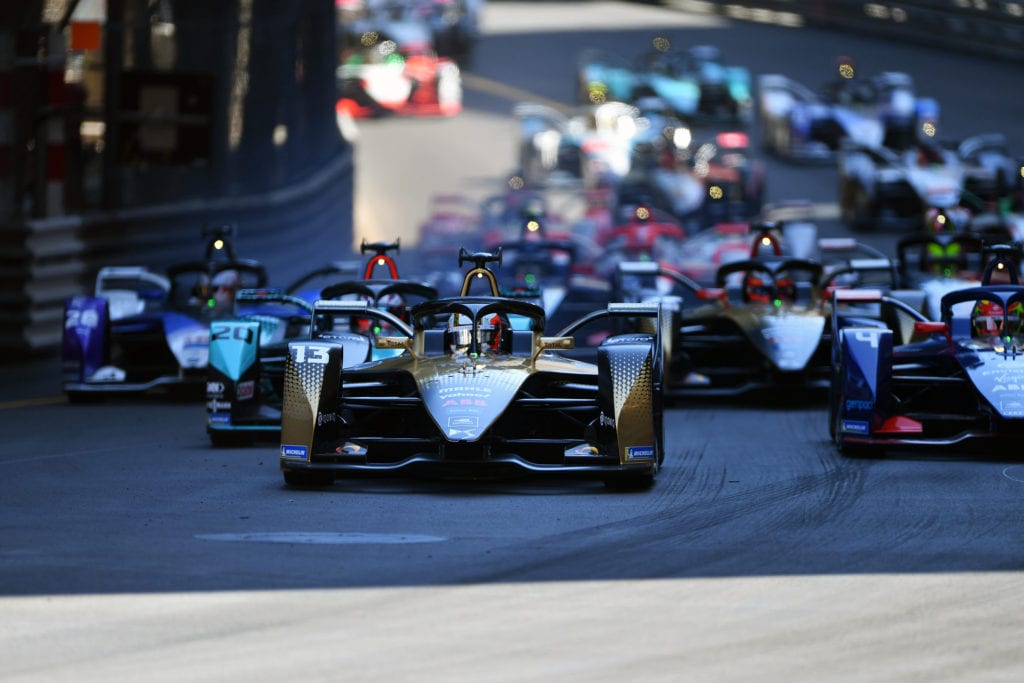