Formula E Shenanigans Are Back With A Wild Second Race In Diriyah – WTF1
Skip to content
×
Formula E , News

A collision while going for Attack Mode? Check. An unsafe rejoin? Check. Cars in the wall bringing out safety cars? Check. The race restarting with marshals still on the track? Check. Wheel-banging overtakes while still behind the safety car? You bet. If the first race of the weekend in Saudi Arabia was intriguing, if a bit tame, the second race saw Formula E back to its manic… well, best is probably the wrong word, but you get the picture.

Pretty much the only driver not to get involved in any of it was Alexander Sims. On pole once again, this time he simply sprinted off into the distance at every opportunity, managed the restarts perfectly and cruised to a largely untroubled and brilliant first Formula E win as many of those who looked to challenge him fell by the wayside.

Antonio Felix da Costa spun Sebastien Buemi around while as Buemi appeared to be going for his first trip through the Attack Mode zone. Buemi then impatiently forced his way back into the middle of the pack, causing several drivers to take avoiding action. He copped a penalty, dropping him out of the action, as did Da Costa for spinning him out in the first place, dropping them out of the fight for the podium.

Before that penalty, da Costa made a move on Lucas di Grassi and yesterday’s winner Sam Bird tried to follow him through. However, that opened him up to attack from Mitch Evans, who really attacked him by knocking Bird off-line through the twisty and dusty middle sector. While recovering, Bird was then pitched into the barriers by Pascal Wehrlein. Bird was out and Evans penalised.

At the restart, Sims and a couple of others went for the Attack Mode. Max Gunther (and one or two others further down) didn’t and instead decided to barge his way past a couple of cars before reaching the line.

Then, Robin Frijns crashed all on his own, bringing out another safety car. When the race got underway again, the cameras scarily revealed that Frijns’ car was actually still being recovered, triggering a hasty full course yellow.

Di Grassi used his final Attack Mode and dropped from second to fourth and though he quickly passed Stoffel Vandoorne, he couldn’t find a way past Gunther, who regardless of the legality of how he got into second, was doing a fine job of acting as rear gunner for BMW teammate Sims, who by this point was well up the road.

And that’s how things stayed, Sims winning from Gunther to deliver a BMW one-two (albeit with a heavy asterisk as the carnage of the first safety car restart is still under investigation) with di Grassi third and Vandoorne continuing Mercedes’ impressive debut weekend with fourth.

Another big name to suffer was Jean-Eric Vergne – a pre-race battery change forced him to take a stop-go penalty on the first lap which left him hoping for safety cars to get any chance of points. Even though they came, he could only make it as high as 11th, meaning the reigning champion leaves the first weekend with a big fat zero next to his name… maybe.

That’s because it seems like most of the grid either has been, is, or will be under investigation for one infringement or another, meaning that the only position you can be truly close to certain of is that Sims won. Felipe Massa in particular seemed to be getting handed penalties at a rate that even Pastor Maldonado would be proud of.

But, in terms of the pre-penalty result, there are still some good drives worth pointing out. Oliver Rowland went from 16th to sixth, Nyck de Vries from 23rd to seventh, Oliver Turvey from 17th to eighth, and James Calado from 21st to 10th in his second Formula E race – a fine effort.

Regardless of how things shake out with whatever penalties do or don’t get issued, one thing seems sure – Sims will be leading the championship heading into the next race in Santiago in January. 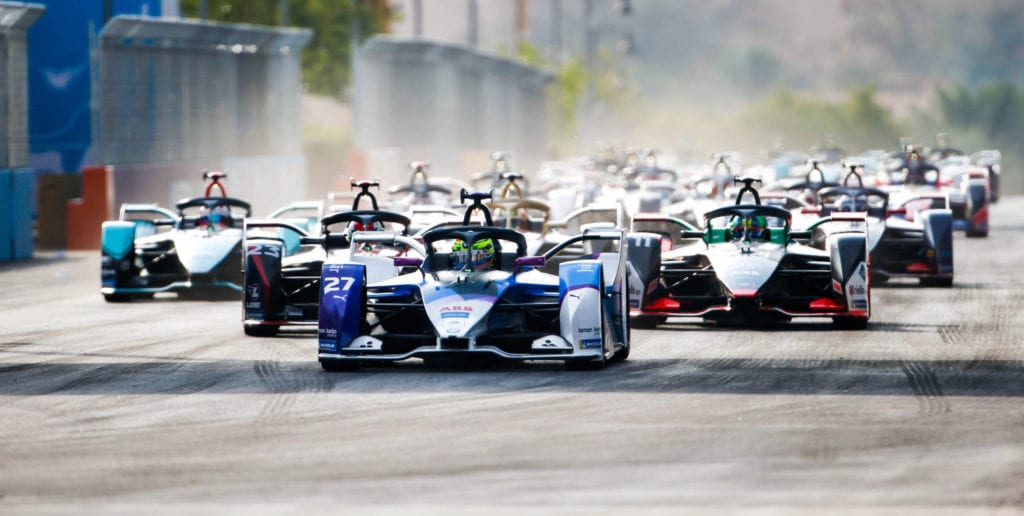