Giovinazzi Had A Bet That He Would Get His Hair Cut When He Scored His First Points – WTF1
Skip to content
×
Formula 1 , News

Giovinazzi has (or perhaps now that should be ‘had’) some rather luscious locks. However, fresh from becoming the first Italian driver to score points since Vitantonio Liuzzi in the 2010 Korean GP, some of his fabulous hair met an end after his team boss savagely attacked him with a pair of scissors.

A promise is a promise… (especially with your boss) ✂️ 🤷🏼‍♂️ • (Yes, we probably have the best Team Principal in the world 😂) • #AustrianGP #GetCloser @antogiovinazzi99 @beatzehnder.f1

This wasn’t just some unorthodox celebration, though, but actually the result of a bet that Giovinazzi made with Vasseur at the previous race in France – a bet which he seemed reluctant to follow through with! He told Sky Sports F1:

“It was a bet! He said in Paul Ricard that if I take points I will need to cut my hair, and here we said if I don’t score points then I don’t cut my hair. Now I scored points so I’m OK with my hair because I’m really good with my hair and I don’t want to cut it!”

Giovinazzi seemed so happy to finally score his first career points. After an underwhelming (and slightly unlucky) start to the year, he’s really been on some solid form lately and is no longer the only non-Williams driver with a zero next to his name. If losing some of his hair is the price to pay for that changing, it seems like a fair deal!

He’s not the only driver to have involved his hair in a bet – in 1976, John Watson told team boss Roger Penske that he’d only get rid of his beard if he won a race. Penske had never won a grand prix and wasn’t the most competitive team, but when he managed to take a surprise victory (coincidentally also at the Austrian GP), Watson kept his word, got the razor out and de-bearded himself. 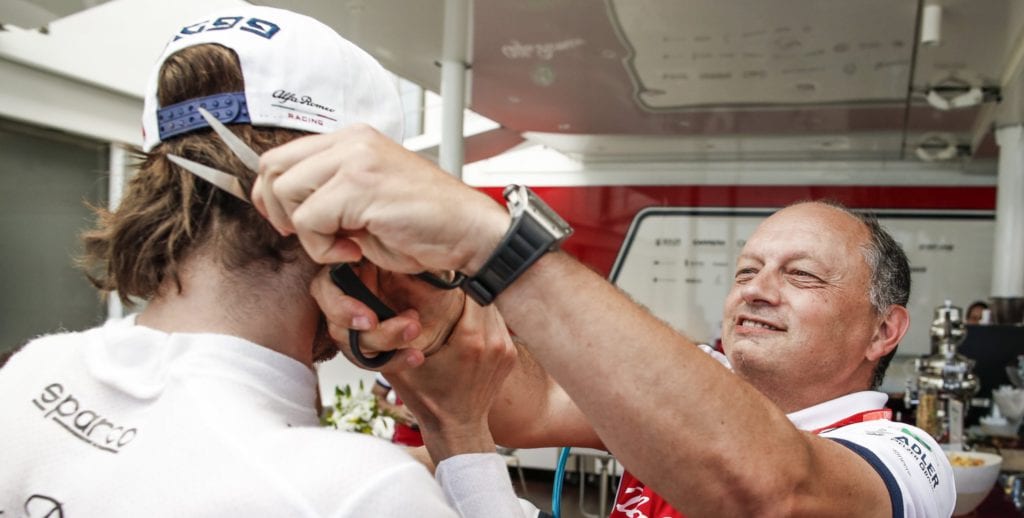