GP3’s Only Race At Monza Was Packed Full Of Mayhem – WTF1
Skip to content
×
Crash , Juniors

GP3’s Only Race At Monza Was Packed Full Of Mayhem

GP3’s Saturday race was a complete washout and was postponed to Sunday morning, with the second race being binned off. But, while there was just one race, it certainly delivered enough drama.

The main focus was the battle at the front between the three ART cars, with awesome three-wide battles, intense scraps and a hard-fought victory for George Russell.

But, their lead battle was interrupted by numerous pauses, thanks to safety cars and virtual safety cars for incidents.

The first was at the start when Leonardo Pulcini managed to mount his Arden car onto the rear wing of Alessio Lorandi’s Jenzer, forcing both drivers off track and into the wall at the second chicane.

It was a bizarre incident, his car properly latched onto the back of Lorandi, and Pulcini had to be extracted by the car but was conscious, so everyone seems to be OK.

Moving to the mid-way point of the race, after a long safety car for that lap one clash, and it was two more Jenzer drivers in the wars.

This time, Juan Manuel Correa outbraked himself into the first chicane and smashed into the back of his team-mate Arjun Maini. Awkward…

That brought out the Virtual Safety Car, pausing the race once again, and the safety car was then deployed for the very last lap at Monza.

The race ended up going to time as there were so many interruptions, with Niko Kari crashing out of fourth place on the penultimate lap.

He lost the rear at the exit to the first Lesmos and spun into the wall, bringing the race to a premature end. Thanks for that… 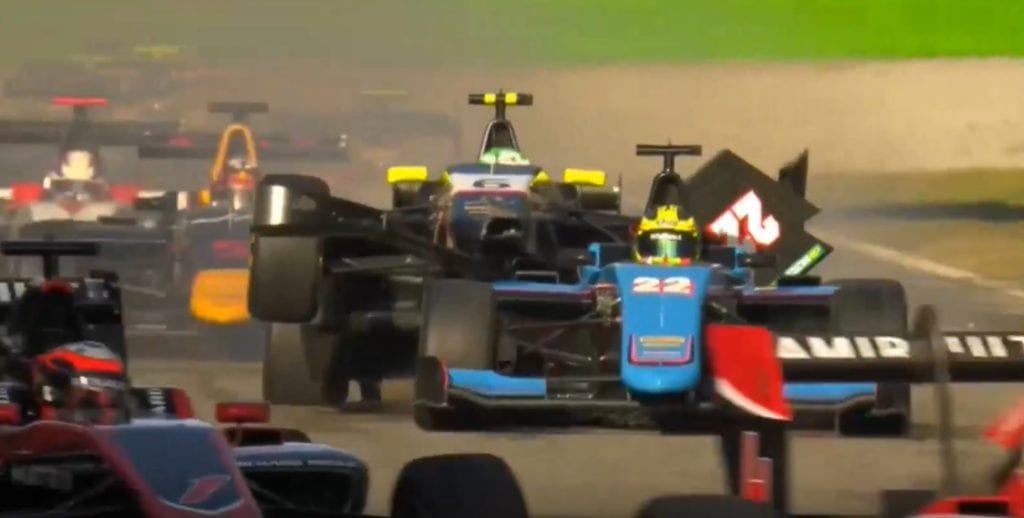