Hamilton Actually Drank From Ricciardo’s Sweaty Shoe On The Podium

After forgetting to do his signature shoey on the podium at the Nurburgring last month, Ricciardo made sure to perform it to the world when he got another surprise third place finish at Imola. Only this time, he wasn’t alone.

The shoey is one of those things that seem incredibly fun but also when you think long and hard about it is incredibly disgusting. Drinking warm champagne from a sweaty boot that has been on your foot for close to two hours, is really not an ideal post-race drink.

Ricciardo himself has even called those that want to partake in a shoey “sick bastards”, but those on the podium have joined in from time to time. From Nico Rosberg, Martin Brundle and even Gerard Butler, it became a big part of Ricciardo’s podium celebrations.

Hamilton has before declined the option of a shoey, stating how he doesn’t want to get ill, but during today at the Emilia Romagna GP the adrenaline clearly got to him as he asked Ricciardo if he could toast to their success with his sweaty race boots.

Ricciardo had to triple check he was serious, before removing his race other race boot and filled it with the fizz.

“I heard Lewis saying, take your other shoe off. That look me by surprise,” Ricciardo told Sky post-race. 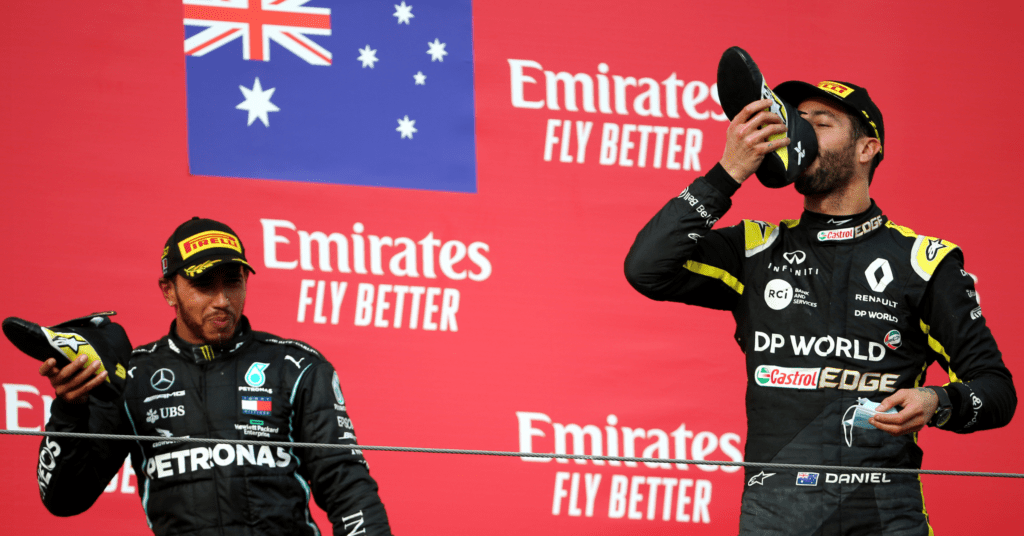