Hamilton And Vettel In War Of Words Over Baku Contact

Daniel Ricciardo winning against the odds, Valtteri Bottas finishing second from a lap down and Lance Stroll scoring an unbelievable podium. The Azerbaijan Grand Prix was a crazy race but it was the title rivals in fourth and fifth who are writing all the headlines after a moment of madness behind the Safety Car.

Vettel hit the back of Hamilton believing the Mercedes driver brake checked him and then seemingly turned into his title rival after pulling alongside him to wave his hand in frustration.

Vettel told Channel 4 after the race: “It was quite obvious. I didn’t run into the back of him on purpose. I damaged my wing, I think he had a little bit of damage as well. Nothing that would have impacted on the race.

“It’s just not the way to do it. He’s done it a couple of times. Afterwards his restart was really good. He surprised me and jumped me, so I don’t think it was necessary.

“The problem is with me right behind, getting ready and all the other cars, then there’s a chain reaction. He did something similar a couple of years ago in China at a restart. It’s just not the way to do it.

“I think it was very clear. In the end, we’re racing as men. I don’t have a radio to him. I think if I get a penalty then we should both get a penalty.”

Hamilton responded to Vettel’s comments: “If he wants to prove he is a man, do it out of the car face to face.

“Driving into a car could put someone at risk. Imagine all the kids watching today and seeing that from a four times world champion.

“It is just not driver conduct. Dangerous driving, 10 second penalty for that sort of thing? Nah…”

Should Vettel have been given a stricter penalty? Should Hamilton have gotten a penalty too? Let us know your thoughts in the comments… 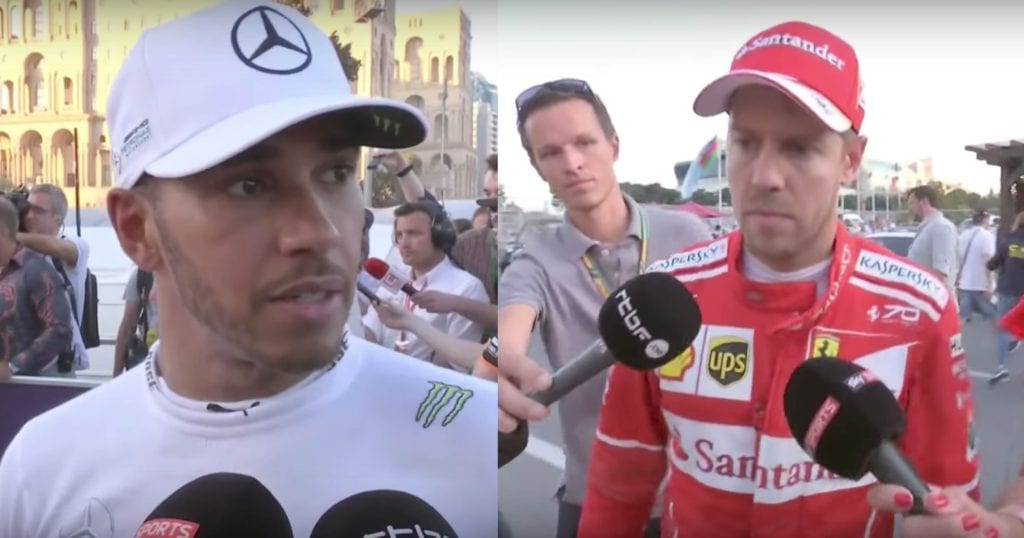