Ferrari looked to have the quickest car in Singapore this weekend but both cars were eliminated in the first corner in a clumsy incident which also claimed Max Verstappen.

The incident appeared to be caused by Sebastian Vettel moving across on Verstappen, who couldn’t go anywhere because he had Kimi Raikkonen up his inside. The three cars met and boom, that was that. It looked to be nothing more than the kind of simple racing incident that can occasionally happen at the start of a Grand Prix.

After going from fifth to second by turn one (which became the lead following Vettel’s spin) Lewis Hamilton mastered the tricky wet conditions early in the race as the pursuing Daniel Ricciardo couldn’t come close to matching the pace of the Mercedes driver.

Even when he saw his lead slashed after two further safety car periods, he calmly went about building a gap again and took the full complement of 25 points for his 60th career victory. On a day when Vettel scored a big fat zero, that means Hamilton has a 28 point lead in the championship over his rival with just six races left to go.

Ricciardo finished in a solid second place whilst Valtteri Bottas made it two Mercedes on the podium with third, despite doing most of the race without a drinks system in what is one of the toughest races of the year.

First lap incident aside, it’s probably fair to say it was a fairly uneventful race. There was some good battling going on in the midfield during the wet part of the race, including a particularly good scrap between Felipe Massa, Kevin Magnussen, and Esteban Ocon.

As the track dried out however so too did the action. Even when the change from intermediate to slick tyres came there was little in the way of changes in the order.

It was an attritional race though – Fernando Alonso also got caught up in the first corner shenanigans, eventually putting him out, meaning we’d lost four cars very early on in the race. By the end we’d also lost Daniil Kvyat, Marcus Ericsson, Nico Hulkenberg, and Kevin Magnussen, with just 12 cars reaching the finish.

From the podium places down, however, there were plenty of drivers with cause to celebrate. Carlos Sainz Jr. scored his career-best result in fourth ahead of Sergio Perez, another solid performance fresh off the news of his contract extension with Force India.

Jolyon Palmer finally got to the end in the points with an impressive sixth place. The Brit drove well all race, even running as high as second at one point during the pit stops – perhaps he should be dropped from the team more often!

Stoffel Vandoorne finished seventh for McLaren, making him the third driver to score their best-ever result in the race.

Though it may not have been the thrilling race we were all expecting, the combination of that one crash plus the wet weather has massive implications for the championship.

It set the stage for Mercedes and Hamilton to take 25 points from Vettel on a day when he might not have even expected to finish on the podium. 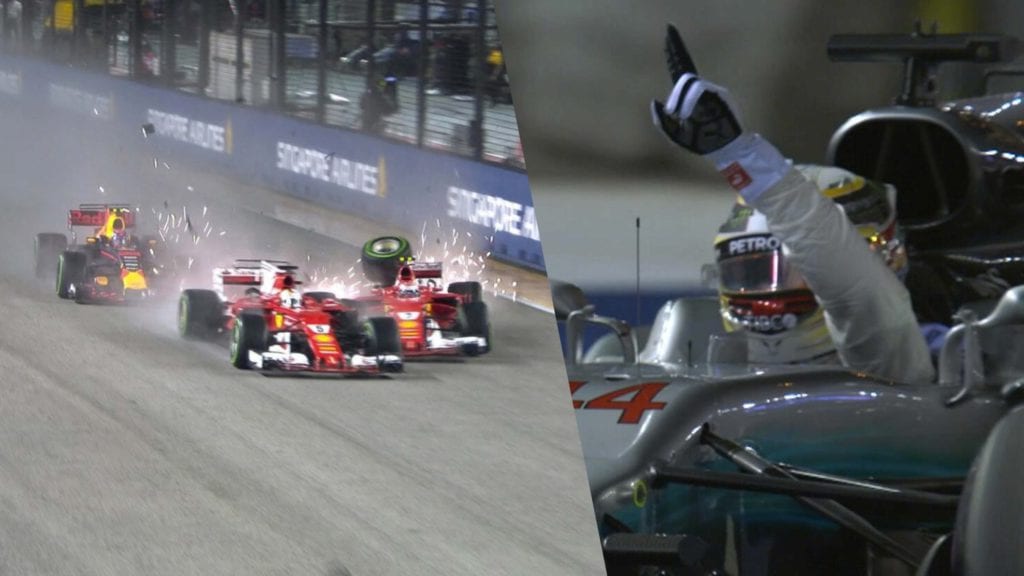